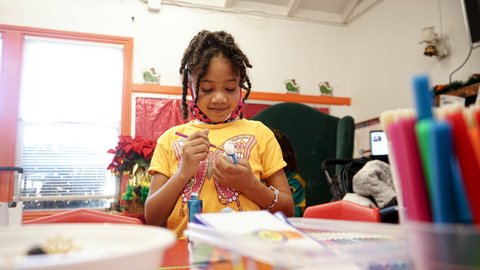 Posted at 15:00h in Arts and Culture by Danielle Parenteau-Decker 0 Comments

Nevaehn paints an ornament during the Kuumba celebration at the Black Parent’s Resource Center’s Kwanzaa event on Dec. 18 in Richmond.

Creative exploration brought children, their family and friends to the Black Parents Resource Center to celebrate kuumba, one of the seven principles of Kwanzaa, on Dec. 18.

The center, located at 260 Broadway in Richmond, shares space with the Multicultural Bookstore and Girls Inc. of West Contra Costa. Both organizations participated in the event.

The Black Parents Resource Center promotes African American culture and its values while trying to educate and learn from people from other backgrounds.

“Kwanzaa is not represented. We want to make sure it is there,” Black Parent Resource Center co-founder Zelon Harris said.

The importance of Kwanzaa for Harris lies in the meaning behind its creation.

From Dec. 26 to Jan. 1, families and communities organize activities around the core values of Kwanzaa known in Swahili as the nguzo saba, celebrating one each day. The seven principles are umoja, or unity; kujichagulia, or self-determination; ujima, or collective work; ujamaa, or cooperative economics; nia, or purpose; kuumba, or creativity; and imani, or faith, according to Karenga’s website. 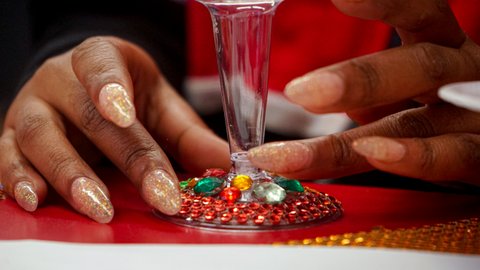 A woman glues plastic gems onto the base of a “unity cup,” or kikombe cha umoja in Swahili. During Kwanzaa celebrations, everyone sips from the unity cup to symbolize the togetherness of the family and community.

“Kwanzaa gives us a whole week to focus on our culture,” Harris said.

The Dec. 18 event celebrated kuumba early to give kids and their families a chance to create handmade Christmas gifts for their loved ones.

At the event, five tables filled the center’s main room with craft supplies.

Johnnie George-Towns, 70, set up one table where participants could create beaded necklaces or decorate glass cups to use for Kwanzaa celebrations. 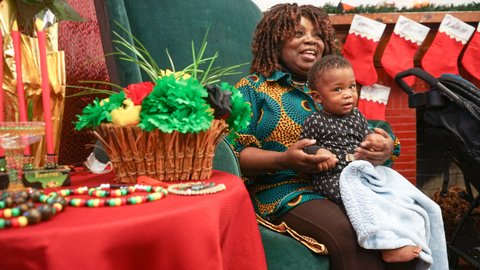 Sacramento resident Johnnie George-Towns, 70, holds a baby as she sits next to a table decorated with necklaces and wristbands she made for the kuumba celebration at the Black Parents Resource Center’s Kwanzaa event on Dec. 18 in Richmond.

Some tables had miscellaneous ornaments that could be painted to the crafter’s liking.

Glitter paint, crayons, paint, glue, paper and other art supplies filled one of the tables where children crafted together or by themselves. 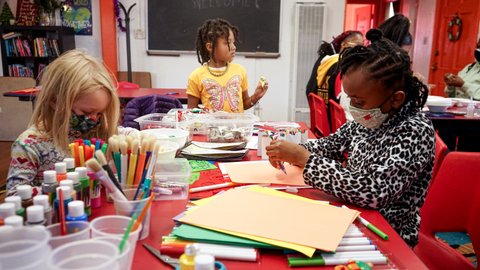 One craft table was set aside specifically for children at the Black Parents Resource Center’s 2021 celebration of kuumba, or creativity.

The children made crafts while eating pizza and other treats. Arissa Reed, 9, said her favorite part was the variety of crafts she was able to work on.

Reed said she doesn’t really understand the meaning behind the occasion but added, “I want to learn more about it.” 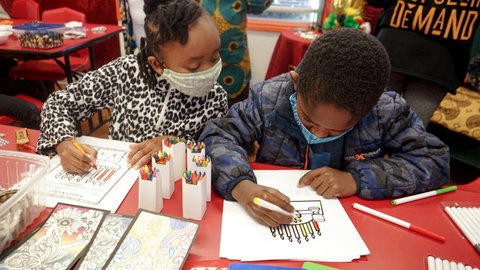 Arissa Reed, 9, and her brother are coloring pictures of a kinara, the candleholder used in Kwanzaa celebrations.

“We want to bring out the Black community because it feels like we are being lost,” said center co-founder Juanita Towns.

Towns, who grew up celebrating Christmas and New Year’s, now observes Kwanzaa, something relatively new to her. But because Richmond and the larger Bay Area is such an inclusive place, knowing her culture is imperative to being able to form strong collectives with other people, she said.

“It is not just one thing anymore. I can be with a person of another race and we can incorporate each other’s culture,” Towns said.

Kwanzaa itself brings a multitude of African cultures together.

“In a word, the values and practices of Kwanzaa are selected from peoples from all parts of Africa, south and north, west and east, in a true spirit of Pan-Africanism,” Karenga wrote on the Official Kwanzaa Website.

Those continental African cultures are then mixed with U.S. African cultures to pay “strict attention to cultural authenticity and values for a meaningful, principled and productive life,” Karenga wrote.

Towns holds that part of Kwanzaa’s meaning close: to promote meaning and productivity into her community. With the world changing, the beliefs of her culture must be shared with all walks of life, she said.

“We want to gather the community at large and all types of cultures,” Towns said.

The center will host a larger Kwanzaa event Wednesday at the Multicultural Bookstore.