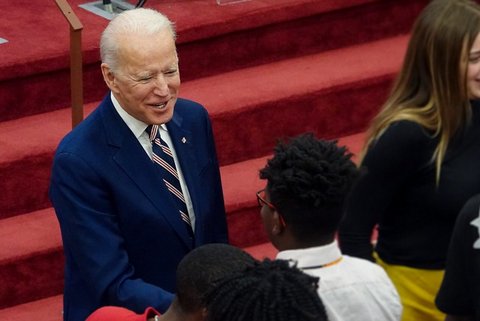 Posted at 12:09h in National, Politics by Danielle Parenteau-Decker 0 Comments

Joe Biden campaigning in 2020 at a church in South Carolina where he won 61% of the Black vote in the Democratic primary. (“Joe Campaigning” by Flickr user stingrayschuller under CC BY 2.0 license)

Black voters played a significant part in getting Joe Biden elected, first as the Democratic nominee and then as president. Now, they have mixed feelings about his presidency so far.

Biden said during his campaign, “If you have a problem figuring out whether you’re for me or Trump, then you ain’t Black.” Some hesitated to support him, but his history as the vice president to Barack Obama and his promises brought comfort to Black voters, ultimately earning him 92% of the Black vote. Overall, 22% of Biden’s votes came from Black people.

It’s been nearly a year since he took office, and while opinions vary on Biden’s progress, his rating with the public, and specifically the Black community, has dropped drastically within the past few months.

The Pew Research Center released several reports Sept. 23 of the public’s approval of Biden on policies, issues, personal traits and job rate. Black adults, generally, hold a more positive than negative view of Biden; however, approval dropped from 85% to 67% by September, and only 49% strongly approved of his job at that point.

More recently, 58% Black respondents in a Politico/Morning Consult poll of 1,998 voters that was released this month said they approved of the job Biden was doing, compared with 43% of voters overall.

As MSNBC and the Hill reported this month, the Biden administration has been responsible for some significant achievements that should be good for Black people but has come up short in other areas. That is due in no small part to opposition from Republicans and a few Democratic legislators, but that doesn’t mean voters are willing to let Biden pass off the blame.

Valentino Cooper, 20, a psychology major at Contra Costa College was a first-time voter in the 2020 election. Cooper said he doesn’t have much interest or knowledge in politics but voted Democrat because it’s familiar and aligns most with what matters to him.

“I’m not super into politics, though I did have an appeal to Biden since he was running for the Democratic party and had similar campaign promises that benefit communities I come from,” he said.

Cooper named COVID protocols, an increased employment rate, and efforts around climate change legislation as positives of the Biden presidency.

He said he has not seen any efforts made to support the Black community, specifically. If there has been legislation for Black people, he doesn’t hear it discussed, Cooper said.

Cooper said the Biden administration could support the Black community by emphasizing rehabilitation over prison, making sure there are real repercussions and actions taken when police officers commit acts of brutality, and developing ways to prevent police brutality in the first place.

Ultimately, he said that under the circumstances, he doesn’t have any large complaints about the Biden administration and appreciates that COVID-19 safety has been one of the larger priorities.

What’s more, he said he was relieved that Donald Trump was no longer in office.

“I settled for Biden and was strongly against Trump,” Cooper said.

Not everyone saw the change as a good thing, despite disliking Trump as well.

Tyree Hopkins Sr., 44, a telecommunication technician who has lived in Richmond for more than 10 years, said he does not like any president but especially does not like Biden.

“I didn’t like him coming in, and I don’t like him now,” Hopkins said. “I know Biden in ’94 was responsible for the crime bill and it left a distaste in my mouth.”

“I believe he is a bigot and a racist and has shown nothing that he’s not,” Hopkins said. “I was hoping he wasn’t going to be president. I would have left it as it was.”

Hopkins said that with Trump, at least, you knew what you were getting.

“I would rather have Trump as president because I think it’s better to have someone in office who lets you know they don’t like you than someone who lies and makes promises, pretending that they like you,” he said. “We knew where he stood with us. It seems like it was the only time the community was unified — a common enemy”

Previously a Democrat, Hopkins said he voted on everything except for president in 2020. He said Democrats and Republicans are two sides of the same coin and neither truly care about Black people.

When asked who he would have preferred for president, he laughed.

“We need our own party as Black people instead of being forced to accept anybody they say is blue,” Hopkins said.

Hopkins said Biden and previous presidents sign legislation for other groups, but when it comes to Black people, any potential positive effects don’t trickle down or they get stalled, so they never see the fruits.

Geneva Hamlin, a 51-year-old long-term Richmond resident, said the government ought to have more people like her in office.

“We need more Black people in government,” she said. “If I could, I would run for office.”

Hamlin voted for Biden in the 2020 elections in the hopes that he would not have the same mindset as the previous president. She said he’s doing a decent job but could still use some work, particularly on his COVID-19 policies.

“I am and have been dealing with racism in the workplace, so there’s been no improvement or effort with discrimination towards Black people,” she said, also mentioning “being passed up for promotions after not getting vaccinated.”

“We are last on the totem pole and we don’t see the impacts of rules or laws unless it’s negative,” she said.

Biden has three more years in office, and as he slowly loses support from all around, it remains to be seen what he will do to try to gain it back.