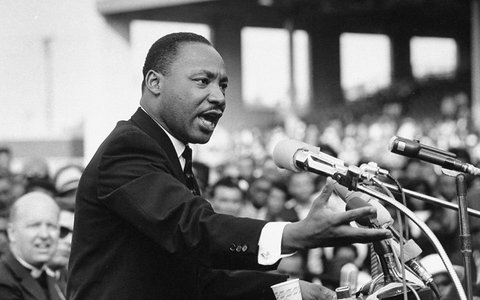 Editor’s note: In honor of Martin Luther King Jr. Day, we asked students at Kennedy High to tell the Pulse what the civil rights movement means to them. They answered the question in historical and contemporary contexts, thinking about King, segregation, George Floyd and Black Lives Matter. They considered how King made the world a better place, what has changed and what still needs to. Their remarks have been lightly edited for clarity and represent the opinions of the people who wrote them.

The civil rights movement is 100% one of the most important moments in American history. I believe that modern racism is a thing, and it’s honestly horrible because many folks are affected by this. I’m thankful for what Dr. King did. He was a great leader and stood up to the government [and the segregationists who] bombed his house, hated him, stabbed him in the back. After all that, he remained in faith. His goal was to make change. No matter what, he kept pushing. If it weren’t for Dr. King, there would be no positive change. Dr. King is a very important person in American history, 100%. He did more than any president. As we’re heading into the future of our nation, I see racial injustice and racism. I’ve never really been out there to protest, but I try to repost on social media anything I can. I believe we can make a change by using our voice because white nationalists are always in control. Coming from a Latinx background, my family has faced racism at their jobs or at the store, and it sucks because that sometimes make us feel down, but we keep pushing. I believe we can overcome racism by sticking together and supporting folks from different backgrounds. We are all humans, and it doesn’t matter if we are Black, brown, white, yellow, etc.

Civil rights is a very tough topic. Sometimes, I feel the meaning has been lost. Civil rights means, to me, to act and stand up for what you believe is right and for basic human rights. It’s what all people deserve of society. We ignore civil rights because we think all of our problems have been solved from back then, but society needs to wake up and look at the facts. We think that just because it was in the past, that it’s fixed, but we need to realize the ’90s weren’t that long ago, and we need to take action [against] racism and more. It’s what the people deserve.

The civil rights movement will always go down in history. For years, civil rights activists and Black people have been fighting for equal rights for all. It’s ridiculous not everyone has equal rights. Not having equal rights puts some in a tough position. Some people still believe not everyone deserves equal rights. Not to mention how some can be treated as less of a human being but instead a threat to society. Civil rights and racial justice matter because no one should be disrespected or made any less of a human being just because of who they are, where they come from or their ethnicity and race. Everyone deserves to be treated with utmost respect and deserves to be loved and so on. Racism, police brutality and other world problems may never be over, but it’s our job to acknowledge it and educate others about it and prevent people from hurting others.

The civil rights movement, to me, is a movement by mostly Black people, but also a lot of non-Black people, to treat Black people with fairness, whether it be in neighborhoods, jobs, restaurants, or just out on the street. MLK is a big hero to the Black community because after Black people became free, there was a lot of segregation between white and Black people, with such things as separate bathrooms, libraries and buses. Black people were not given fair jobs with fair pay. MLK was a big celebrity in justice. He advocated resolving problems with peace and said to love thy enemy rather than hate them. It’s not fair for people to be considered as less because of their skin color. The Black Lives Matter movement started not just because of George Floyd, but the many videos that captured white policemen beating and killing Black men. The reason why many people are really mad is not just because of the injustice towards them but also because they got very little to none punishment for doing what they did. With George Floyd, a police officer choked him to death with his knee on the back of his neck while George pleaded with him, saying “I cant breathe” over and over again until he passed out and died. That took people over the edge. Just like back in the day, we protested peacefully until the army and tanks came out, shooting rubber bullets everywhere and people unable to breathe because of the toxic spray they spread in the air.

First, I am very grateful for Dr. King and what he went through and what he did for African Americans to get equal rights. If it wasn’t for him stepping up and speaking and writing the “Letter from Birmingham Jail,” I think segregation would still be a thing. I couldn’t imagine seeing my mother and my grandmothers disrespected by white people, just people who think they’re “better” than black people. I know raising children would be so hard, having your children grow up, and they’re not allowed to go certain places and have fun. George Floyd didn’t have to go out like that. The police officer could’ve done anything else besides having his knee on his neck for [almost nine minutes]. It’s just sad what Black people have to go through in this world. We’re not living; we’re surviving.

I haven´t gotten involved in any racial justice matter. But I would like to say that Martin Luther King was a hero. One thing about Dr. King that I took to the heart was to be nonviolent. King used nonviolent protests and got arrested to prove his point. I think that Dr. King accomplished what he wanted: to end poverty, protect voting rights, and make America equal for all people. Dr. King did all of these by loving his enemy. That’s one of my favorite quotes by him. I also believe that these three quotes by him changed the world; “The time is now to do what is right”; “Equality for all people”; “Injustice anywhere is a threat to justice everywhere.”

Civil rights and racial justice matter to me because it affects my future. If no one fought for their freedom then things would be a lot worse. Racial justice can determine life or death. Back in the day, it was OK to hit a Black person, but if they defended themselves, they were in the wrong, just simple things like that. Imagine the fear of people to hurt someone based on their skin color. White is equal to Black; it’s yin and yang, but people forgot that. They hate what they could not control. You cannot control Black people, for we are humans just like you. i personally have never gotten involved because I want to stay in school. I’m not traveling to Washington just for a protest that people would label a hate crime or simply ignore. I believe one day if we open people’s minds to the reality of a world without racial hatred, it could work, maybe, but it’s a long shot, for now.

What the civil rights movement means to me is the fight against racism and segregation. Segregation was one of the worst possible events that happened in the past. In my opinion, there is no difference in people because everyone is human. There shouldn’t be a reason to treat people differently just because of their skin color. You have to get to know their character first before you make assumptions about a person. Segregation makes me frustrated by how people treated each other. Racial justice matters to me because I don’t think people should judge where you came from. Everyone should have an opportunity to freely act themselves and not be put in a stereotypical category. Like how people say that “All Asians look the same.” I have personally been in a situation where they asked questions like, are you from China or Japan? People assume I am a certain race without even asking me, and it gets annoying a bit.