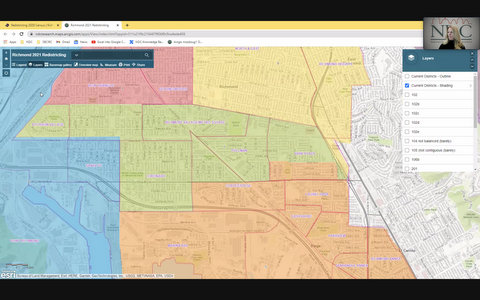 In less than two months, Richmond’s district lines will be redrawn for the next decade. The high stakes topic was discussed at a Tuesday night workshop facilitated by the National Demographics Corporation. Drafted maps were reviewed, and community members asked questions.

She began by reviewing a timeline of the redistricting process. She said all four public hearings have been held and that Tuesday’s workshop came at the request of the City Council.

Currently, there isn’t a population balance across the districts, as required by federal law, hence the need for a new map, said Tilton. Population balance requires districts to have no more than a 10% difference from each other, which should result in about 19,465 people in each Richmond district. Four submitted maps have been discarded for having an uneven spread in the population: Maps 101, 103, 106 and 107. Maps 104 and 105 had the same issue albeit by a small margin, said Tilton, so she didn’t discard them because they can be altered easily.

While not required, Tilton said attempts will be made to minimize reassigning voters to another district. As lines are redrawn, some who were supposed to vote in a 2022 City Council election will be moved to a district that will have its election in 2024 and vice versa. Some affected voters would, therefore, go six years unable to cast a ballot for a council member candidate. The City Council has the authority to reassign district number designations, although it has not expressed an intention to do so, said Tilton.

To evaluate the legality of maps, judges assess whether the voting power of a marginalized group has been weakened.

NDC itself has drawn three maps that are up for consideration: 201, 202 and 203. All maps can be viewed in detail and interacted with online. In the interactive tool, the user can zoom in on individual streets, combine maps to see the differences and lay out the neighborhood council boundaries.

After concluding her virtual presentation, the demographer took questions from the public. One community member, Don Gosney, raised concerns that at least one map incorporated some residences from El Cerrito. He said that similar, and potentially more severe, errors may be in other maps. While Tilton focused on “deferred voters” during her presentation — those who’ll have been reassigned and have to wait longer to vote — Gosney pointed out the problem of accelerated voters, those who cast a ballot in 2020 and could vote for city council again in 2022.

Addressing his first point, Tilton said that census-provided geography is required to draw maps, which are less accurate than local geographic information system data. Despite this, she said that no one outside the city could vote in Richmond and that population count would remain accurate.

Linda Whitmore of the Santa Fe Neighborhood Council echoed Gosney’s point about accelerated voters. Tilton described the process of quantifying accelerated voters as “labor intensive” and did not provide figures. Such numbers could be figured out by using the interactive maps, though the process would be time consuming.

Lori Hart of the Parchester Village Neighborhood Council said she was under the impression that maps were to be debated and that residents could compromise over differences. She said that Vice Mayor Demnlus Johnson “led me to believe” that’s what the session would be for. The city clerk who facilitated the Q&A said that was not the case.

The deadline to submit a map is Feb. 18 at 5 p.m. The City Council is scheduled to adopt a map March 22, well before the April 17 deadline.