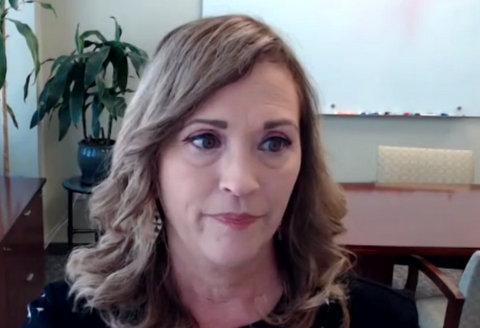 Children generally are safer from the negative health effects of COVID-19, but they have suffered the consequences of the pandemic in many ways. “And trauma is cumulative, especially in kids,” said Dr. Veronica Kelley of the Orange County Health Care Center. (Screenshot captured by Michael J. Fitzgerald / Richmond Pulse)

The negative effects of COVID-19 have generally not been as severe for kids 5-11 years old as adults, an East Bay pediatrician said.

“But hundreds of children have died,” Dr. Jennifer Miller of East Bay Pediatrics said. “And COVID is not leaving anytime soon.”

Miller made her comments March 16 as part of an hourlong Ethnic Media Services’ panel titled “The Most Vulnerable Kids: What 5-11-year-olds need to recover from the COVID-19 pandemic.”

Unsurprisingly, Miller and the other panelists emphasized the importance of having children vaccinated against the coronavirus. But concerns about the need to keep children in classrooms, addressing mental health issues and maintaining community support were also part of the panel discussion and question and answer session with reporters.

Miller said medical authorities have been carefully watching for evidence of multisystem inflammatory syndrome in children who have contracted COVID-19. The syndrome is rare but can manifest itself with inflammation of various body parts including the lungs, heart, kidneys, eyes, skin, brain or gastrointestinal organs.

The disease is also found in adults.

Miller said vaccine hesitancy among parents remains a problem. “The parents say things like they are ‘concerned about side effects,’ or ‘corners were cut in development of the vaccines.’ ”

She stressed the vaccines are safe and effective. “And free,” she added.

Keeping schools open and students in classrooms is a critical part of having children recover from living in an environment filled with COVID-19 effects, medical and social, according to Dr. Sohil Sud of the California Department of Public Health.

The state is recommending schools shift to a system in which students can remain in classrooms even if a student in the class is diagnosed with the virus.

Instead of shuttering entire classrooms or closing schools, as was the practice, the state now recommends any infected student should simply be isolated and sent home. Then, the balance of the class should be tested several days later.

And the state is willing to help sponsor vaccination clinics, Sud said.

“All the rates of illness and death associated with COVID are dropping, but we are keeping up surveillance along with recommending that people continue masking up,” he said.

That surveillance includes keeping an eye on an emerging variant called BA.2, which the World Health Organization says is a “sublineage” of the omicron variant.

“It’s rising as a proportion of cases,” Sud said. “If there is anything we have learned, it’s to be humble.”

The proportion of cases of young children landing in emergency rooms has increased notably, with some showing signs of mental health problems.

Dr. Veronica Kelley of Mental Health and Recovery Services at the Orange County Health Care Center said that ER visits for children were up 24% in 2020. She said it is not that surprising given what was happening with lockdowns, school closures and the direct impacts of virus-related illnesses in the family.

“About 167,000 kids have lost a parent or caregiver to COVID,” she said. “And trauma is cumulative, especially in kids.”

Panelist Beth Jarosz of KidsData noted that communities that pulled together, encouraging vaccinations, made great progress in helping limit new cases among children.

She singled out Imperial County in Southern California as a good example. Among California counties, it has the best vaccination rate after being one of the lowest in the state. According to the Los Angeles Times, 92.7% of Imperial County residents are considered fully vaccinated.

“They are doing something right down there,” Jarosz said.

The panel discussion came during the state Department of Public Health’s Week of Action.