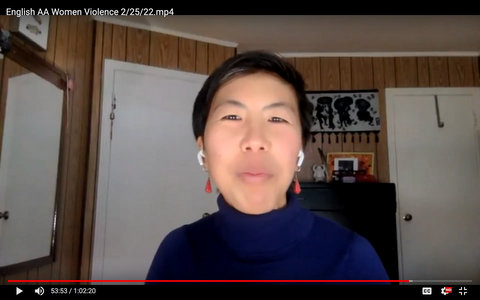 25 Mar Racism and Violence Against AAPI People ‘Is Nothing New’

Sasanna Yee, whose grandmother was fatally assaulted in San Francisco in 2019, spoke on a panel of women addressing the rise in racism and violence against Asian and Pacific Islander people in the U.S. (Screenshot captured by Danielle Parenteau-Decker / Richmond Pulse)

Sasanna Yee still lives in the working-class San Francisco neighborhood where she grew up. It’s also where on Jan. 8, 2019, her grandmother Yik Oi Huang was assaulted at Visitacion Valley Playground, a park across the street from her home.

She later died from her injuries.

Anti-Asian hate has come under a harsh spotlight since the pandemic began, driven largely by the belief that Chinese people — and by extension, all people of Asian descent — were somehow responsible for the coronavirus and pandemic. But as the killing of Yee’s grandmother shows, the violence didn’t start in 2020. The dark history stretches back much further.

A discussion of the recent violence and racism against Asian American and Pacific Islander people in this country — particularly women — was the focus of a Feb. 25 panel hosted by Ethnic Media Services.

“The objectification of Asian women is nothing new, and the pandemic has just exasperated this for many of us,” said Sung Yeon Choimorrow, executive director of the National Asian Pacific American Women’s Forum.

Choimorrow said attitudes toward Asian women in the U.S. could be traced back to the treatment of Afong Moy. In the 19th century, she was brought from China “by a New York businessman who put her on display so that Americans could watch her eat, look at her small feet, look at her skin color, her hair and the way she talked, speaking Chinese, as a form of entertainment, pretty much.”

“I think it’s very important for us to talk about … the historical past of our country and how Asian American women have been treated,” she said. “It is not a surprise that we are where we are today.”

She said prejudicial views of Asian women are also shaped by how they are portrayed in pop culture, which has also played “a big role in the way AAPI women are treated by the general public in America.”

“These are not favorable terms but rather a way to hypersexualize Asian women,” Choimorrow said.

Eight people, six of them Asian women, were shot and killed March 16, 2021, in Georgia spas.

“AAPIs have become louder during the pandemic in response to the rise of Asian hate, especially after the March 16 Atlanta shooting massacre,” said Michelle Kang, secretary-general of the Atlanta Korean American Committee Against Asian Hate. “We were furious and frustrated over the attacks and killings of eight innocent people.”

Choimorrow said the shootings “shook a lot of us to the core” as Asian American women “who have experienced sexual harassment on a regular basis.” She said that when she has tried to talk about being harassed, she gets brushed off with comments like: “That’s just boys being boys.” “That’s just things people say. Just ignore it.” “They didn’t mean it. They were drunk.”

She also addressed other persistent stereotypes that she said make Asian people targets, including the model minority myth.

“The stereotype that Asian Americans are smart, hardworking and will be submissive and quiet also leads to vulnerability and bullying, which many Asian American students, workers and workplaces faced even before the pandemic,” she said.

The pandemic has added fuel to the racist fire.

Perhaps the biggest fanner of the flames was then-President Donald Trump, who repeatedly used such racist terms as “Chinese virus” and “kung flu,” in speeches and various media and on Twitter before his account was suspended.

Attacks, some deadly, of Asian people of all ages have made headlines across the country since the pandemic began, including multiple assaults of older Asian people in the Bay Area. Yee said that because the incident with her grandmother happened before, it didn’t garner as much attention.

Yik Oi Huang was attacked while walking that 2019 morning in Visitacion Valley Playground, Yee said. She was beaten and left for dead. Her injuries included brain damage and broken ribs, putting her in critical condition. She ultimately died nearly a year later, on Jan. 3, 2020, at the age of 89.

A young man was arrested in January 2019 on suspicion of assaulting Huang and other crimes. Yee said he has been in jail since and is awaiting trial.

“This is a young baby in my eyes who is hurt, and I know hurt people hurt people,” she said. “What happened to this young man to cause him to do such a thing? He must be in so much pain.”

Yee shared an online petition to rename the park where her grandmother was attacked in her honor.

“We are reclaiming this space,” she said.

She credits community leader Ronald Colthirst, who is Black, with coming up with both the idea to rename the park and the proposed name itself: Yik Oi Huang Peace & Friendship Park.

“He saw my pain,” Yee said. “He wants to work together to create this safe park, to invest in a safer playground where no one needs to walk and do their exercise in fear.”

“I teach Cantonese seniors how to be strong in their bodies … not only at the muscular level but also in their mind, body and spirit level,” she said. “All of this is protecting them when they are out in public to feel stronger, to know that they matter, that they belong on the streets, to walk with an air of confidence.”

Yee brought up the sense of belonging multiple times during her EMS panel comments. She said that she and her team coined the slogan “Asians Belong” to be a rallying cry like “Black Lives Matter.”

“And why is it important?” she asked. “This phrase is affirming. This phrase acknowledges that we have been seen as perpetual foreigners but no longer.”