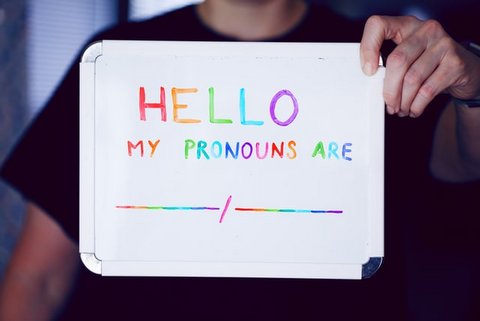 29 Mar They Are All Right: Teens Weigh in on Gender Pronoun Debate

(Photo by Sharon McCutcheon on Unsplash)

Editor’s note: The singular “they” dates back to the 14th century, according to the Oxford English Dictionary. Yet even today, using “they/them” or other nonstandard pronouns is controversial. We asked a group of Kennedy High students how they feel about the expansion of gender pronoun language and whether it comes up in their daily lives. Their responses have been edited for length and clarity.

I have a friend who goes by all pronouns and a friend who goes by she/they and a teacher whose pronouns [are] she/they as well. I don’t feel comfortable being referred to as “she” sometimes. I am genderfluid, and I am trying to go by the pronouns she/they. How I feel about the expansion of gender pronoun language is a river of emotions, mostly positive. I love that gender pronoun language is expanding because no one has to feel left out or uncomfortable with pronouns they don’t want their closest friends or family members to use when discussing about the individual. Everyone can be their authentic selves. No one should ever be mistreated just because their pronouns don’t equal their [perceived] gender or because of the fluidity of gender, sex and pronouns, in general. Overall, I think others should respect others as individuals no matter what pronouns one another uses and so on. Pronouns are a key part of the individual, and the beauty of pronouns is that they are freely interchangeable. No one needs to be fixed or changed. By expanding the terminology of gender pronoun language, we’re respecting others without judgment. It’s not difficult to respect an individual’s pronouns. Everyone deserves respect and love. I deal with this cultural change with an open mind and open heart. I support every part of this and hope it will help others understand and respect individuals’ pronouns.

I have some friends who use fluid pronouns, though they feel more comfortable using they/them on a daily basis. I too use they/them, but I’m comfortable using she/her, as well. My parents often are ruthless when they hear about pronouns and people who don’t use “normal” she or he pronouns. It’s honestly very tiring having to endure all of this hatred for people they don’t know or understand.

The truth is that I don’t care because I don’t discriminate against people who want to change their gender. In my family, we don’t criticize binary or nonbinary communities or other LGBT [people], among others. I do not feel uncomfortable when they tell me how they prefer [to be called] because it is how they identify. I do not feel uncomfortable when they refer to me how they prefer.

I know three people that are referred to as they, and it doesn’t change how we see them in any bad way. We just refer to them as their pronoun and respect them as anyone else. For me, I try not to think about it too much. We should move on from the traditional roles and accept the changes the world has bought upon us.

>>>Read: How I Learned to Rethink the Gender Norms I Was Raised With

Well, I don’t know any one of my friends or peers who is uncomfortable with he or she. It is more like the people who were born 2006 or later that are uncomfortable with the pronouns he or she. I don’t really like this gender pronoun language because I don’t support it. Why would they prefer “they” when “they” means multiple people? I personally find it weird, and I see no point in this gender pronoun.

Yes, there is someone who is not comfortable being referred to he or she. It is Pérez. I don’t know how I feel about this expansion of gender pronoun language. I feel that people can do what they want. They can be called how they want. I think this is a good thing because this is how people feel comfortable. This cultural change, I guess, is something good for many people. Some people don’t like to be called she or he, so I think it is something that is good for them. For me, I don’t care.

I myself go by he/him/they/them, which is simply what I’m comfortable with. I feel fine about people who do the same or only use they/them. They/them pronouns really should be used more often when you are referring to someone you don’t know. Everyone should respect other’s pronouns and ask people what they are. That should be more normalized in our age. I do well with the cultural change because I’m part of the change. I hope society can end up doing the same for the better of the youth so that they grow up with a good view of the community.

I know many people, me included, who don’t feel comfortable with he/she pronouns. I feel that this change has been really helpful to me and those around me. Using pronouns other than she has made me feel so much more comfortable. Using other people’s pronouns was, at first, difficult, but it becomes easier with a bit of practice. Dealing with the cultural change was very easy as I almost grew up with it. I started hearing about people using other pronouns when I was in middle school. Since then, the concept is much more familiar to me, and I hardly bat an eye at it. I’m glad so many people are able to feel more comfortable in their day-to-day lives with the change of pronouns.

I’m very supportive of self-identifying and exploring who you are as a person. I feel that most people are often tied to two genders — man and woman. That being said, not everyone believes that this is the case. People deserve respect, especially when it comes to who they are as a person. I feel that as we progress, our generation becomes understanding of our conditions and individuality.

No, I don’t know anyone that is not comfortable being called she [or] he. I feel like as long as they correct me respectfully, I will apologize and move on. I feel like it’s whatever. It doesn’t affect me, so I don’t care. I will always be a he. I would tell my family just let them be. It’s the new generation. People want to be who they feel like they are. We must learn to leave the past behind and accept people for who they are, not [judge them] by what [gender] they identify with or what race they are.

I know several people who don’t feel comfortable being referred to as he/him or she/her, and honestly that’s OK. It doesn’t hurt you to respect someone and their pronouns. Being disrespectful because you “don’t agree” is rude. Why would you purposely make someone uncomfortable because you don’t like it? Imagine people constantly disrespecting you and invaliding your feelings.

I had no idea how gender references worked until last year because I had never really cared, but my girlfriend has stated that they prefer to be addressed as they/she. Personally, I don’t care how you identify because you are free to live your life as you see fit. It’s important to accept others for who they are because some people may take offense and feel excluded. I’m not an expert on this subject, but it’s interesting to understand how other people discover their actual self through gender identities. I believe that people are simply closed-minded about this issue because of previous generations when everyone referred to each other by the binary pronouns. In previous years, I was one of the close-minded people because of the people I surrounded myself with, and since separating myself from those people, I have changed my ways of thinking. I used to think it was OK to make fun of others for how they choose to live or identify, and as of today, I’m glad I’m changed because I’m happy for those I know who choose to identify as whatever they want.

A lot of my friends go by they/them or she/they. I also go by they/them, but I’ve gotten less annoyed when people misgender me than before ’cause I just kind of got used to it. I feel like nowadays, it’s easier to get people to understand and respect people’s pronouns, but there are still people who are so sick in the head, they think it’s funny to purposely misgender someone or don’t even attempt to understand someone’s gender identity — especially the older generation. I feel like no matter what someone were to say to them, they wouldn’t even try to understand. It’s annoying and frustrating, but it’s like what can you do?