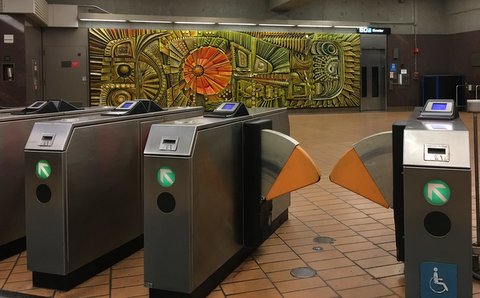 BART riders will once again be required to wear a mask while on BART property after the transit agency’s Board of Directors approved its own mask mandate Thursday.

The board voted 7-0, with Directors Debora Allen and Robert Raburn abstaining, to require masks within BART’s paid areas through at least July 18, 2022. The vote came just over a week after a federal district court judge struck down the U.S. Centers for Disease Control and Prevention’s mask requirement for public transit and airplanes.

The California Department of Public Health also announced last week that it would align with the CDC and drop its own mask requirement for public transit and transit hubs like bus stations and airports.

After BART said in a statement April 20 that it would make masks “optional but strongly encouraged” throughout its system, BART Board President Rebecca Saltzman and Directors Janice Li and Bevan Dufty announced they would propose adding a mask requirement to the transit agency’s customer code of conduct.

On Monday, Saltzman also sent letters to health officials in the five counties in which BART operates to urge them to issue their own requirements to wear a mask on public transit.

“As you are aware, the requirement to wear masks on trains and buses as well as within bus terminals and trains stations, helps protect everyone from COVID-19, especially those who are immunocompromised, people with underlying health conditions, and children under 5 who cannot be vaccinated,” Saltzman wrote in the letters.

On Thursday, Saltzman said enforcement of the new requirement will be focused on education rather than penalizing riders.
BART police officers will only give warnings to those without masks for the first week of the new requirement. Masks will also be available for free at each BART station.

The mask requirement will also not apply to people who have a disability or medical condition as well as children aged 2 or younger, under the updated code of conduct.

“The intention is not to have a permanent mask requirement on BART,” Saltzman said. “The reality is we’re still in the midst of a public health crisis, and in the past three weeks cases have been going up every day in the Bay Area.”

Virtually all riders throughout the BART system have complied with previous mask requirements. Mask audits conducted four times per month in the first three months of the year found 97% compliance in January and 98% in both February and March.

Riders who refuse to comply with mask requirements after an initial warning have been given citations starting at $75 and climbing as high as $250, but BART Police Chief Ed Alvarez told the board Thursday that it has been exceedingly rare for officers to cite riders.

Alvarez estimated BART police officers have given just seven citations for failing to wear a mask over the last two years, and said officers have been very successful by just reminding riders that masks are required.

Alvarez also said he did not have data immediately available on how many riders have been ejected from the system over the last two years for refusing to put on a mask.

“Our officers and anybody wearing a BART police uniform always carries free masks for giveaways and that’s where we’ve pretty much gotten most of our compliance,” Alvarez said.

Director Liz Ames suggested doing away with the citations in general in an effort to prevent BART police officers from potentially receiving pushback from non-compliant riders.

“I just think we should just give them a mask and not even do the citation,” she said. “I mean, just don’t even get into a big conflict because right now, the country’s in conflict over this, and we don’t need more.”

While Allen and Raburn both said they actively wear masks aboard BART trains and plan to continue doing so, Raburn suggested BART’s requirement would undermine the authority of public health officials while Allen argued BART police officers simply have more pressing issues to deal with throughout the system.

Allen also said she felt the board did not have enough data and information on the efficacy of the different types of masks to consider whether a requirement would keep riders safe en masse.

Allen and Raburn both advocated for BART to continue strongly recommending the use of a mask in lieu of requiring it.

“The fact is, today, most passengers are masked,” Raburn said. “Enforcement without a health department mandate is problematic.”

Allen and Saltzman also suggested BART police should change the kinds of masks they give to riders. According to Alvarez, officers have been giving cloth masks to riders, which have been less effective than surgical masks and high-quality masks like N95-grade respirators at preventing the spread of recent COVID variants.

While BART police have given out cloth masks, Alvarez said, station agents continue to provide surgical masks to riders who request them.

Board Director Janice Li argued that the mask requirement aligns with the first sentence of BART’s customer code of conduct, which states the agency’s policy “to help ensure the safety, security, comfort and convenience of all those who use its services.”

Li also argued that the prior federal and state mask requirements have not negatively affected the agency’s ridership and that the use of masks is a modest way of trying to keep others from getting sick.

“If the science bears out that we were wrong and mask mandates on public transit show no data-based evidence affecting COVID transmission rates,” she said, “it means the worst-case scenario is that we continue a very simple masking requirement for a couple more months.”