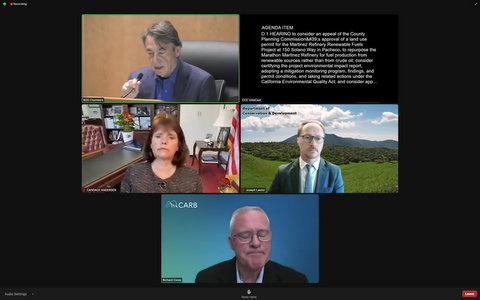 The Contra Costa Board of Supervisors on Tuesday denied an appeal in which some Richmond City Council members and environmental groups contested refinery plans. (Screenshot captured by Richard Tzul / Richmond Pulse)

The Contra Costa Board of Supervisors unanimously denied an appeal opposing the approval of renovating a fuel refinery to process biofuel instead of fossil fuels. The Tuesday decision was a defeat for the appellants, consisting of Richmond City Council members and environmental advocacy groups.

The project, approved by the county planning commission, would have the Martinez Marathon Refinery convert renewable feedstock, such as soybean and corn oil, into renewable fuel. Proponents said that the project would offer a transition from fossil fuels to an eventual all-electric grid.

“The fact of the matter is that whether we approve these projects here in Contra Costa or not, these fuels are going to be manufactured somewhere,” said John Gioia, District 1 supervisor. “I mean, our action here approving or denying is not going to stop the production.”

The project would replace pipes and tanks to properly process the renewable feedstock, which requires insulation and heating. The land use permit application was submitted by Marathon, an energy company, which had representatives at the hearing to vouch for the project and contest the appellant claims.

The facility sits on a 2000-acre site in Pacheco, near Martinez, and had slowed down activity due to the pandemic. The productivity decline was factored into the “baseline,” a measure of the refinery’s environmental impact from 2016 to 2020, which was reported in the project’s environmental impact report, said Lawlor. (Although that was contended by the appellants.)

The facility’s conversion is intended to meet the criteria set in California’s low carbon fuel standard program. The incentive program awards credits to entities that lower their emissions below a certain threshold, while those that emit over the threshold build up credit deficits. Deficits can be remedied with credits, otherwise fees must be paid to the state.

Gioia asked the executive officer of the California Air Resources Board, Richard Corey, for context around lifecycle emissions. Fuels such as corn and soybean oil produce lower emissions compared to diesel fuel, for example, as lifecycle measurements take into account the process of harvesting and other processes, instead of simply measuring its emissions when used as fuel, said Corey.

Several grievances were raised by the appellants, who are composed of Richmond City Council members Claudia Jimenez, Eduardo Martinez and Gayle McLaughlin and organizations such as Communities for a Better Environment, Center for Biological Diversity, Natural Resources Defense Council and Friends of the Earth.

Ann Alexander, an attorney for the Natural Resources Defense Council, laid out some of those concerns.

The baseline is inaccurate, she said, because the facility has been shut down during the pandemic, not reactivating in spite of a demand rebound. So the project would emit more emissions than the facility currently does, she added.

An estimation of how much renewable feedstock would be used has not been provided, Alexander said, and some of the types of feedstock have been banned in the European Union due to their environmental impact.

While the refinery would be expected to produce 48,000 barrels per day, there is no cap on production, said Alexander. The soil investigation, part of the site cleanup process, is allowed to take 15 years, a process that could be done in weeks or months, she said.

She called the environmental review of this project deeply flawed and said it ought to be redone with more accuracy and less rush.

“It’s essential to take the time to do it right and in fairness to the community and the taxpayers whose subsidies would be paying for this project,” Alexander said. “The consequences of getting it wrong are enormous.”

The baseline is accurate so long as the refinery is still licensed to operate as it has historically and that its operations were within recent years, both of which are the case with the Martinez Marathon refinery, said an attorney for Marathon.

The attorney attributed the refinery inactivity to logistical complications such as rehiring a workforce and restarting equipment.

This project would not hinder the goals under Gov. Gavin Newsom’s executive order for all newly made vehicles to be zero-emission by 2035 and for the state to be powered by zero-emission energy sources by 2045, said the attorney.

“The truth is that this transition isn’t going to happen overnight,” he said. “And if you believe that trucks and trains are going to continue to be needed to deliver the goods that we all consume in the near term, then this project is the best way to reduce those emissions now.”

Diane Burgis, District 3 supervisor, said the all-electric infrastructure is incomplete, sharing that she drives a hybrid as part of the ongoing effort to transition. She also cited rising prices of products that need to be transported by vehicles.

Ultimately, the board sided with Marathon and voted unanimously to approve the project.