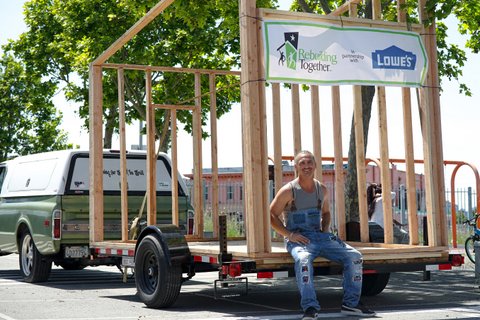 Posted at 12:35h in Neighborhoods by Danielle Parenteau-Decker 0 Comments

Chris “Rooster” Morris, executive director of homeless outreach nonprofit Tacos and Roses, sits on the frame of a tiny home during a Rebuilding Together East Bay-North barbecue at Nevin Park on April 30.

The annual event, founded by the first Rebuilding Together organization in Chicago, encourages organizations to repair their cities on the last Saturday of every April.

National Rebuilding Day kicked off a comprehensive two-year effort to revitalize the Iron Triangle through local initiatives like providing a tech training hub for seniors and youth, cooling tents in public spaces during the summer heat, and a trash clean-up and anti-illegal dumping campaign. Attendees were also able to see a mobile tiny home exhibit and a preview of the upgrades to Nevin Park. They also had the opportunity to sign up for free home repairs if they lived in the neighborhood.

At the space behind the Nevin Community Center, Tacos and Roses founder Chris “Rooster” Morris parked a trailer with the tiny home to display to attendees.

The portable tiny home was built by unhoused workers for unhoused people in the East Bay-North and Rising Sun tiny home program in collaboration with nonprofit organizations Richmond SOS and Tacos and Roses, with funding from Lowe’s. 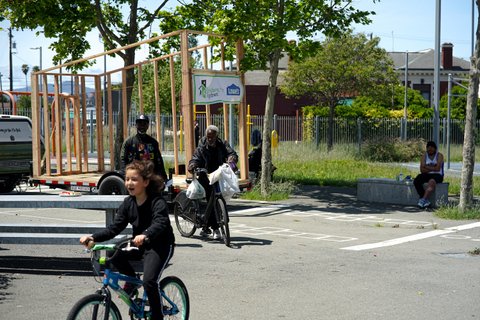 A boy rides his bike as two men walk behind him during the Rebuilding Together East Bay-North barbecue at Nevin Park on Saturday.

“This [tiny home] is a place of security,” Rooster said.

He himself struggled with housing, eventually becoming homeless and living in his truck for two years, when he started attending San Francisco State University to study engineering, he said.

Just as he was able to educate himself to better his quality of life, Rooster, who oversaw this initial building process for the tiny home, is optimistic the program will provide more than just a space for someone to live in.

“It’s not only providing a trailer for someone, but also it provides training to be marketable,” he said.

The program will help participants receive their pre-apprenticeship certificate and prepare them to enter in a registered apprenticeship program, East Bay-North executive director J.W. Frye said.

East Bay-North will use the ShelterWise plan package to build the 96-square-foot home rigged to a trailer frame.

The Salsa Box tiny home was originally built as an instructional model to give workshop students a clear view of each step to take in building a tiny home, according to the ShelterWise website.

The East Bay-North tiny homes will not have bathrooms, showers or cooking areas. They will have solar power for lights, chargers and other electronics but nothing incendiary like hot plates, he said.

The homes will take workers 10 weeks to construct, Morris said.

Once the homes are built, the homes will be placed in one of 17 possible locations at community centers and houses of worship that received permits from the city, Frye said.

Churches and community centers will provide a communal kitchen and bathroom and, depending on location, showers will be available to residents in the host’s building or through Richmond SOS’ portable shower, Frye said.

Identified locations will go through a screening process. East Bay-North will hold discussions with neighboring community members to see if support can be expected or gained. And while there may not be direct opposition to housing people living in streets and encampments, a lack of understanding of the program’s checks and balances can cloud the public’s judgment, Frye said.

Church locations throughout the city that are officially selected will host units for six months. Then, the units would move to new locations. In those six months, residents would live there rent free and be enrolled in a workforce development program with Richmond SOS, Frye said.

And because the East Bay-North tiny homes are part of a transitional housing program, the residents would retain their county navigation services.

“The idea behind that is you’re working at SOS being paid more than a prevailing wage and you can save your money,” Frye said. 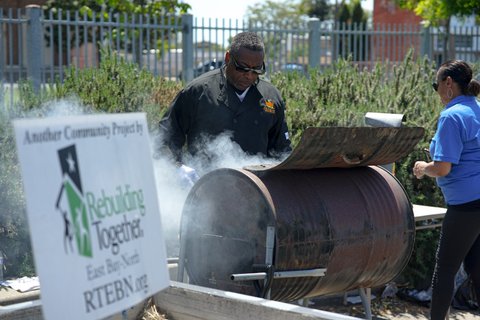 A man grills during Rebuilding Together East Bay-North’s barbecue at Nevin Park on April 30.

The National Rebuilding Day barbecue was meant to bring awareness to the years of outreach work and, most recently, the push to create housing and workforce development through tiny homes. That recent work started when Richmond passed an ordinance creating the Tiny Houses on Wheels Pilot Project in 2017 to allow up to three RVs or mobile tiny homes to be parked at churches.

“This part of the Iron Triangle … we always struggled with some form of housing security or mental health issues,” Johnson said.

He grew up in the neighborhood and would come to the Nevin Community Center. At an early age he understood that anyone could end up in a tough living situation, he said. 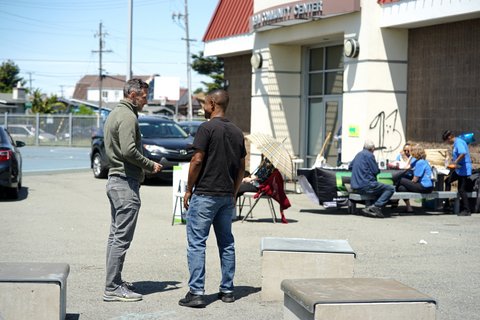 For decades, many organizations have tried to alleviate the struggle of the unhoused community and there are decades of strong work done by the community. But this initiative is going one step further by bringing in so many organizations together to work alongside each other, he said.

“This is what it is about. Different community groups coming together,” he said. “If we all work together, realize we are all different parts of the same machine, and once it gets to clicking, then there is no stoppin’ it.”