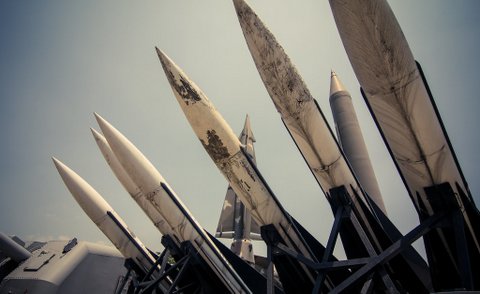 The world is confronting the threat of nuclear armed conflict the likes of which has not been seen since the end of the Cold War. And while war in Ukraine has escalated the threat, its antecedents can be traced to a shift in U.S. military posture years earlier.

That’s the consensus of a group of experts who spoke recently during a briefing for ethnic media organized by Ethnic Media Services.

“How real is the threat of nuclear war,” asked Daryl Kimball, executive director of the non-partisan Arms Control Association and publisher and contributor for the organization’s monthly journal, Arms Control Today. “It is all too real.”

According to Kimball, Russian President Vladimir Putin’s recent rhetoric highlights the grave risks associated with the ongoing conflict in Ukraine.

Describing Putin’s statements as “unprecedented” — including a Feb. 24 warning that interference by outside powers in Ukraine would invite “consequences… such as you have never seen in your entire history” — Kimball notes this marks the first time that the former Cold War adversary has made explicit nuclear threats since the end of the Cold War.

And while some have interpreted Putin’s words as bluster intended to stave off direct U.S. and NATO involvement in Ukraine, Kimball says both Russian and U.S. military doctrine leave open the option to deploy nuclear weapons against non-nuclear targets.

What does that mean in practice? From the purview of Moscow, if the tide of war appears to be turning against Russia, tactical, short-range nuclear weapons could become an increasingly attractive option to gain back the upper hand. And, says Kimball, “Once nukes are used, there is no guarantee that the other side won’t respond.”

Kimball is quick to point out that to date U.S. intelligence has seen no signs that Russia — which maintains an arsenal of some 100 tactical nuclear warheads — has begun to prepare such an attack. Observers also took note of Putin’s Victory Day speech, delivered in Moscow on May 9 to commemorate Russia’s defeat of Nazi Germany, which left out any such escalatory threats.

But with the war in Ukraine now stretching into its third month, Kimball warns that its continuation increases the danger of nuclear conflagration. “The longer the Ukraine conflict continues,” he says, “the higher the risk. We are in a heightened state of danger.”

Michael Klare is professor emeritus and director of the Five College Program in Peace and World Security Studies at Hampshire College. According to him, the current threat of nuclear war dates to a decisive shift in U.S. military posture in 2018 that turned away from the War on Terror to focus instead on what its authors described as “Great Power competition.”

Under this new strategy, articulated by former Secretary of Defense James Mattis, America’s armed forces would turn away from small-scale conflicts in the global South that defined much of the War on Terror to focus on larger wars with “near-peer powers,” namely Russia and China.

For leaders in Moscow and Beijing, that shift brought with it a heightened and unacceptable threat from newly deployed U.S. conventional weapons targeting their countries’ respective military capabilities and infrastructure.

Whether this was the driving factor in Putin’s decision to invade Ukraine is something for “future historians to decide,” says Klare, adding however that the resulting situation has “triggered anxiety” in both Russia and China, prompting the latter to expand its nuclear capabilities.

As for what comes after Ukraine, both Klare and Kimball agree the picture remains decidedly precarious.

“After the war in Ukraine, this process of all three powers building capabilities for conventional and nuclear war is bound to accelerate,” says Klare.

“In Europe, after the war… we’re going to see a new Iron Curtain, except this line will lie closer to Russia than the one during the Cold War,” with both Finland and Sweden now considering NATO membership. In the Asia Pacific, potential confrontation over Taiwan — which U.S. leaders have sworn to prevent from becoming “another Ukraine” — again points to the possible deployment of nuclear weapons.

In the meantime, fighting continues in Ukraine, with Russia’s war aims remaining vague, from what began ostensibly as an effort to topple the current government of Ukrainian President Volodymyr Zelenskyy to more recent proclamations of taking control over eastern, Russian-speaking portions of the country.

For Andrew Nynka, editor in chief of the U.S.-based Ukrainian Weekly newspaper, Putin’s nuclear threats are part of the broader information war being waged over Ukraine. “Putin is using the question of nuclear war to divide his enemies,” says Nynka, adding that absent this threat the situation in Ukraine would look very different. “The only thing stopping Western aid is the threat of nuclear weapons.”

But even Nynka acknowledges that getting into the mind of Putin, a “master of misinformation and disinformation,” is a fool’s errand.

And that uncertainty has defined much of Russia’s strategy—or apparent lack thereof—for much of the war, according to Gabriela Iveliz Rosa Hernández, research associate at the Arms Control Association. “You have broad and unclear aims… Russia is uncertain of what it is trying to do.”

Rosa Hernández notes that whatever its current goals, the use of nuclear weapons by Russia is just as likely to push those aims farther out of reach, hardening resistance both in Ukraine and in the international community. Which suggests the fighting could continue with no clear end in sight.

“I do not see a ceasefire any time soon,” says Rosa.

Both Kimball and Klare agree that communication and a tamping down of escalatory rhetoric are critical and that both Russia and the U.S. need to return to the disarmament table prior to the expiration in 2026 of the New START Treaty which called for both nations to draw down their nuclear stockpiles.

But with tensions at historic levels, a return to such talks appears unlikely, says Kimball.

At which point, he warns, we will be “Living in a world with no restrictions on the world’s largest nuclear arsenals. This is a world we have not seen in some five decades.”