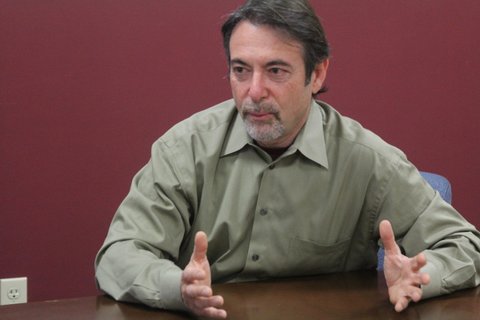 Supervisor John Gioia, seen in 2014, was elected to represent Richmond and the rest of District 1 all the way back in 1998. (Richmond Pulse file)

John Gioia is a fixture in West Contra Costa County. The District 1 supervisor has had the job since he was first elected in 1998 and won’t be easy to unseat. Which doesn’t mean Hulan Barnett won’t try.

The Richmond resident and math teacher at Antioch’s Dallas Ranch Middle School has long been a critic of Gioia’s, to the point of encouraging followers on social media to show up at Gioia’s campaign events and “raise hell.”

He’s also been a vocal critic of the pandemic mask mandates, something that Gioia has supported while on the board.
Barnett said during a Contra Costa TV election forum, hosted by Bob Butler of KCBS radio and posted on YouTube on April 28, that education, affordable housing, and better business development are his priorities.

“There are very few department stores, limited grocery stores, access for families to do anything,” Barnett said.

Barnett said he’d work with local real estate professionals to bring more affordable housing to unincorporated areas like North Richmond. He said the area’s biggest challenges are lack of services and lack of revenue. He also said he’d like to institute a red-light camera program, similar to Fremont’s, to reduce traffic accidents.

He acknowledged homelessness is a problem, but said, “the unhoused population, I don’t know a solution to that that right now. That’s one where we’d definitely have to brainstorm.”

“It’s all about being aggressive (and) vigilant, to get those opportunities and spend money to train workers,” Gioia said.
Gioia touted his involvement in developing the affordable housing trust fund and helping more people get access to mental health and homeless services.

“The overwhelming majority of people who are homeless have mental health or substance abuse issues. They need help. They need our support,” he said.

Gioia pointed out during his tenure, the county did massive outreach to communities with low vaccination rates, expanded access to health services, and started the Contra Costa County Office of Racial Equity and Social Justice. He said health and equity are the biggest issues moving forward.

He asked, “As we come out of the pandemic, how are we bringing up communities most impacted, which were generally communities of color and low-income communities?”

Election Day is June 7. Registered voters should receive a vote-by-mail ballot beginning the second week in May. After May 23, new voters need to register and vote in person at one of the early voting sites or on Election Day at a polling site.

If someone hasn’t received a ballot by May 20, they should contact the Contra Costa County Elections Office at (925) 335-7800 or by emailing ballot@vote.cccounty.us.

The federal Centers for Disease Control and Prevention and county health officials strongly encourage people to vote by mail. Ballots should be marked using blue or black ink and placed in the return envelope. No postage is required. The envelope must be signed and sealed and be postmarked on or before Election Day.

People can check their voter registration status at https://voterstatus.sos.ca.gov and can register at https://registertovote.ca.gov/. For voting drop box locations, go to https://bit.ly/3NcoceE.