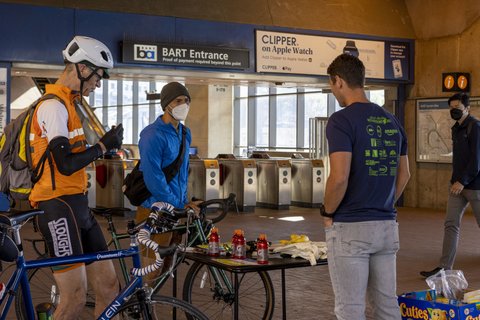 Posted at 11:58h in Bay Area by Danielle Parenteau-Decker 0 Comments

Bikers stop by the energizer station to pick up refreshments Friday at Walnut Creek BART Station for ‘Bike to Wherever Day.’ (Harika Maddala / Bay City News)

Thousands of Bay Area residents chose two wheels over four Friday, biking to work, school or even the grocery store for the annual Bay Area Bike to Wherever Day.

The region-wide celebration of cycling, more commonly called Bike to Work Day or Bike to School Day, was changed to Bike to Wherever Day this year to reflect that many people now work from home as a result of the COVID-19 pandemic.

“The pandemic really gave us an opportunity to be more inclusive with this event,” Bike East Bay executive director Ginger Jui said Friday.

“Not everybody can bike to work even though that was a big day before,” she said. “And now … even if you work from home or if your commute is too long, we would just really encourage people to hop on their bikes.”

Bike East Bay also hosted larger versions of its energizer stations in Oakland, Richmond, Concord and Berkeley, offering raffle prizes and free food to those who spun their spokes.

Bike Walnut Creek’s Garrett Decker offered bananas and Gatorade to cyclists at the Walnut Creek BART station Friday morning and said about 30 people, half of them cyclists, stopped at his table between 7 a.m. and 9 a.m.

“Hopefully we see more and more people on their bikes or walking to work as a way of commuting, that would be great,” he said.
Jui said Bike to Wherever Day, in addition to encouraging Bay Area residents to ride their bikes, is also a way for cycling advocates to build a political case for improving biking infrastructure and making roadways safer in general.

The National Highway Traffic Safety Administration issued a preliminary estimate this week that nearly 43,000 people died on roads across the country in 2021, the first time traffic deaths have eclipsed 40,000 in a single year since 2007. Deaths of bicyclists rose 5 percent from 2020.

Dave Campbell, Bike East Bay’s advocacy director, said typically an increase in traffic fatalities will result in a focus on vehicular safety improvements, but not a focus on reducing the overall number of cars on the road.

“We have to convince people to leave their car keys at home and try other methods” of transportation, he said.
In addition to traffic fatalities, traffic in general has increased across the Bay Area while residents have been loath to return to public transit at similar rates.

According to the Bay Area Council and the Metropolitan Transportation Commission, traffic across the Bay Bridge is at 100% of pre-pandemic levels.

BART ridership, meanwhile, reached 30% of its pre-pandemic levels in February for the first time since the pandemic began.

“A big part of this is making sure that people are feeling comfortable and getting back into the groove of taking transit for their trips, as well as investing in our local neighborhood infrastructure so that people are walking and biking,” Jui said.

Campbell and Jui both said they hope to see the development of more protected bike lanes and more efficient public transit across the region in an effort to get more cars off the road.

Several miles of protected bike lane projects have already been completed in multiple cities in the East Bay, including Berkeley, Fremont and Richmond.

Once completed, improvements to the San Pablo Corridor and the East Bay Greenway would amount to some 30 miles of protected bike lane infrastructure between Richmond and San Leandro, according to Jui.

“Projects are coming, one after another,” Campbell said. “Not fast enough, but they are coming. And with several under construction on Bike to Work Day, it’s kind of exciting.”