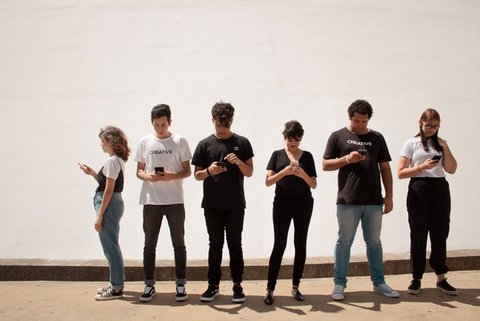 06 Jun My Generation Is Addicted to Social Media

Posted at 14:35h in Commentary, Youth by Danielle Parenteau-Decker 0 Comments

(Photo by Creative Christians on Unsplash)

Editor’s note: A bill passed the California Assembly 51-0 in May that, if it becomes law, would allow parents to sue large social media companies if their children have become “addicted” to social media — that is, if they are spending too much time on social media, to the point that it’s harming them, and they can’t stop or cut back. So we asked youth to share their perspectives on what social media means to them and how it affects other young people around them.

I’m not addicted to social media, but I have seen the damage it can do to teens like me. I’m 15 years old, and I started to see the negative effects of social media on my peers in the sixth grade.

I have had a rough upbringing, so my social media experience was different from most of my peers. In Texas, I lived in extreme poverty, and I tried to hide that fact on social media. I created accounts to make my home life seem better than it was. It was hard to post content because I lived in a small hotel room with multiple people. I had hardly any space and even less privacy to do things with confidence, which I barely had as it was.

But social media was also an escape for me. People couldn’t come over to my home, and I wasn’t confident enough to go to theirs. But social media let me talk to people and stay connected to a world that I felt I wasn’t a part of.

Social media today is different from social media four years ago. I remember a time when kids would post for the fun of it and not really for the likes. It was more of a means of communication. Now, it has become a lot more addictive because people are trying to get likes. At school, I witness the consequences of social media addiction every day. When I look around at my peers, all I see is kids on their phones scrolling through Instagram and TikTok. Kids are failing classes and are willing to go to summer school and lose opportunities because they’d rather be on their phones. It’s sad for me to see because a lot of these students have major potential and they’re wasting it. In some cases, I understand how these kids feel, but I can’t fully relate.

>>>Read: Social Media Puts Users Like Me in Quite a ‘Dilemma’

Despite my negative views on social media, I don’t think the companies should be sued because, honestly, it’s not their problem. I think the responsibility lies with the parents who don’t set boundaries for their children. I wasn’t allowed to have social media, let alone a phone, until I was 11, and the phone I got was a hand-me-down in bad condition.

It’s possible for parents to set rules and install apps that regulate their child’s activity on social media. You can even do it how I was raised: By a certain time at night, you have to get off your phone. There should be some boundaries. We need rules like no posting provocative stuff, don’t talk to strangers online, and don’t give out personal information.

There are multiple effective ways to monitor how much time your child spends on social media.

Part of the problem is that there are so many different social media apps. I personally use YouTube because you can do a lot on there. You don’t have to worry about how many followers or subscribers you have or whether someone you don’t like can view your account because unless you’re a content creator, you won’t really have any problems.

I think that a law limiting young people’s access to social media won’t stop kids from doing what they want. Age verification is very easy to get by. Honestly, I have done it plenty of times to get on apps or websites that you need to be 18 and up to use (nothing too bad).

I completely understand how young people get addicted to social media. These apps offer young people a lot: You can interact with other people, watch funny videos, and even watch educational videos. Parents just need to help their kids manage their social media use to avoid the consequences.