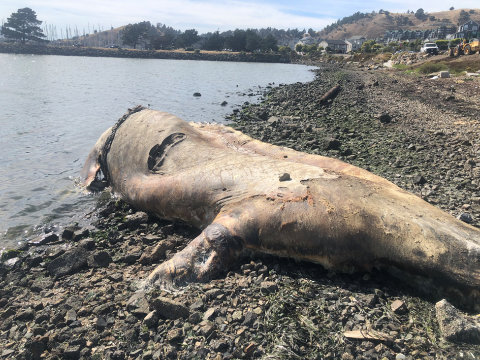 11 Jun Dead Whale Buried at Beach Due to Big Stink

The city of Richmond has buried a dead whale on the beach near the Point Richmond shores Thursday afternoon after its carcass was washed ashore two weeks ago and caused a terrible stink for people living nearby.

The 40,000-pound dead male gray whale was first discovered near a ferry channel in Alameda in early April. The U.S. Army Corps of Engineers then towed it out the following day and removed it to the area of Brooks Island, hoping the carcass would decompose naturally there.

Kixon Meyer, captain of a debris removal vessel with the Army Corps of Engineers, said they had to move it from the navigational channels immediately in case it would endanger the shipping traffic.

“You don’t want to hit a whale with a big aluminum ferry with 150 people on board,” Meyer said.

Large animal remains like this were often sent to Angel Island for further investigation, but the location was not available at this time.

Unfortunately, the line that tied the whale to the Bay got cut off, causing the carcass to float with the tides and be washed up on the beach near Point Richmond about two weeks ago, on Memorial Day weekend.

The whale was stranded on the beach next to the Bay Trail and immediately in front of one of Richmond’s most expensive neighborhoods, known as Waterline. Since then, the city of Richmond received complaints from residents about the unbearable odor, and therefore decided to bury it somewhere on the beach.

“Getting rid of a beached deceased whale is not easily done — if done at all,” said Mayor Tom Butt in a statement.

As the whale was up on the beach and skewed with a structure of beams underneath, the options to get rid of it were very limited. It would be much easier to deal with If it had been in the water or a channel, Meyer explained.

Butt said he was disappointed with the lack of communication about where the whale was tethered and what he said was insufficient support from state and federal agencies to deal with the situation.

The whale has now been successfully buried by a contractor with the city with a tracked excavator earlier Thursday afternoon.