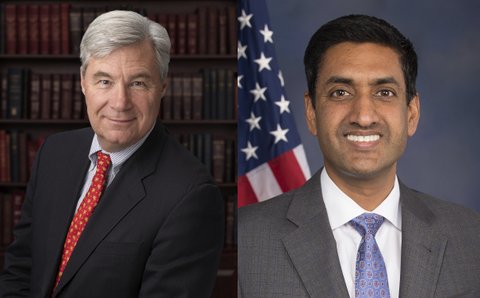 Congressional Democrats want to send as much as $240 a year to most American taxpayers, as long as oil prices stay high.
That’s the annual amount of cash the sponsors of the Big Oil Windfall Profits Tax Act plan to generate, if the bill is passed and signed into law.

The legislation was written by U.S. Sen. Sheldon Whitehouse, D-Rhode Island, and introduced in the House by U.S. Rep. Ro Khanna, D-Fremont. The two lawmakers held a joint news conference Wednesday to announce more lawmakers’ support for the bill and urge its passage.

“The industry is making record profits during a national emergency,” said Khanna. “This will put more money into the pockets of the working class.”

He said the tax was justified in part because U.S. oil companies are following crude oil prices set by OPEC.

“They don’t operate in a real market. They chose to follow the cartel price rather than do market-based pricing,” Whitehouse said.

The money projected to be sent back to taxpayers is based on estimates of oil staying above $120 a barrel, according to Khanna’s office. At that rate, a single filer making up to $75,000 a year would receive $240, while joint filers earning less than $150,000 would receive $360 annually.

According to AAA, average gas prices in the U.S. on Wednesday were $5.01 per gallon, but in California they are $6.43. The Bay Area has some of the highest prices in the state, with an average of $6.57 a gallon.

The nonprofit organization the American Prospect reported in 2020 that members of Congress hold up to $93 million in fossil fuel stocks. Khanna said he doesn’t think that is an obstacle.

“I don’t think that is what is preventing us from getting legislation here,” he said.

Khanna said the millions spent on lobbying lawmakers was a bigger challenge.

According to the nonprofit group OpenSecrets, which tracks political donations, the oil and gas industry spent $119.3 million on lobbying lawmakers in 2021.