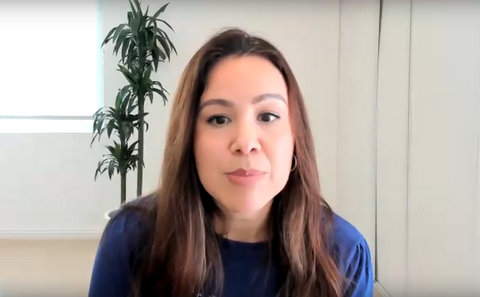 18 Jun Medicaid Health Coverage Is Guaranteed, but for How Much Longer?

Since the early days of the pandemic, people on programs like Medi-Cal have been able to stay enrolled “without having to re-determine or prove their eligibility during this public health crisis,” said Mayra Alvarez, president of the Children’s Partnership. (Screenshot captured by Danielle Parenteau-Decker / Richmond Pulse)

Approximately 1 million children in California and millions more children and adults around the country are at risk of having their health insurance disrupted or taken away in the coming months.

The federal government took steps early in the pandemic to help keep people on public insurance and, so far, has kept that protection in place. But health care advocates warn that families cannot count on this indefinitely and need to take their own steps to maintain coverage.

“Our children, particularly our youngest ones, are depending on that coverage and the adults in their lives to ensure that they can grow up healthy and thrive,” said Mayra Alvarez, president of the Children’s Partnership.

Alvarez spoke as part of an Ethnic Media Services panel May 20 that addressed the potential impact of the end of the public health emergency, particularly on children and families of color.

On Jan. 31, 2020, then-Secretary of Health and Human Services Alex Azar “quietly declared” that the U.S. was in a public health emergency because of the coronavirus, said Joan Alker, executive director and co-founder of the Center for Children and Families.

Then in March 2020, Congress passed the Families First Coronavirus Response Act, signed into law by then-President Trump. The bill offered states additional money for Medicaid and the Children’s Health Insurance Program, provided they met certain conditions. According to Alker, they could not make it harder to enroll in these programs, they had to maintain eligibility levels, and they had to keep enrollees covered through the final month of the public health emergency.

This has allowed “families to stay enrolled in healthcare coverage through Medicaid without additional administrative renewals, without having to re-determine or prove their eligibility during this public health crisis,” Alvarez said.

Georgina Maldonado, executive director of Community Health Initiative of Orange County, said making assistance available is one thing, but many people don’t know how to navigate the system or make use of the services available to them.

She said many of her organization’s clients are hurt by lack of resources, which include a “lack of communication” and “lack of understanding” of documents sent to them. These clients may be working multiple jobs and on weekends making it hard to get help.

Maldonado’s colleague, Marisela Carlos, described a mother who couldn’t get time off work to deal with the renewal letter she received and “didn’t feel comfortable filling out the information herself.” She didn’t realize her family’s coverage had lapsed until she had to take her child to the emergency room with an injury.

The public insurance guarantee has eliminated situations like that, for now.

People on Medicaid usually have to prove their eligibility every year. Individuals can lose coverage because their income has surpassed eligibility limits or for procedural reasons such as not responding to their renewal letter.

“Normally, we lose kids due to red tape at renewal and things like that,” Alker said.

If a family makes too much money to qualify for Medicaid, that does not mean they are able to afford healthcare otherwise. In California, the income limit for a family of four to be eligible for Medi-Cal is $38,295.

People could lose their guaranteed coverage before the emergency officially ends if the state they live in declines the extra Medicaid and CHIP funding offered through the Families First act, though that is something Californians likely don’t have to worry about.

The current public health emergency declaration is set to end July 15. However, the Biden administration has said it would give 60 days’ warning before lifting it.

HHS Secretary Xavier Becerra said in May he planned to extend the emergency declaration, and it is expected he will, likely for another 90 days.

Whenever the loss of coverage comes to pass, ultimately, the effects will likely not be equitable.

“This will disproportionately impact children of color, who are more likely to rely on Medi-Cal for coverage,” Alvarez said.

She also said ensuring continuous Medi-Cal coverage would be an “anti-racist approach” to healthcare.

“Even before the pandemic, longstanding, structurally racist policy and practices have created an environment where families of color experience a significantly greater degree of instability in everything from employment to income to housing,” Alvarez said. “These economic and housing conditions are what heighten the risk of disruptions in health coverage and that eliminate the security that comes with having that coverage.”

Indeed, having guaranteed health coverage means one less thing to worry about, particularly when families are struggling with rising costs of food and gasoline, Alker said.

Efforts are underway to make continuous coverage a permanent thing, at least for young California children.

Alvarez said the Children’s Partnership worked with Assemblymember Blanca Rubio (D-Baldwin Park) on Assembly Bill 2402, which would “allow children enrolled in Medi-Cal to stay enrolled without making their families jump through administrative hurdles and will keep them enrolled up to age 5.”

Some people may oppose the bill and this guaranteed coverage for two main reasons, Alvarez said — the costs or because they see poverty as a matter of personal responsibility and believe people should have to prove they deserve the help.

AB 2402 passed the Assembly on May 25. It is now in the state Senate and was referred to the health committee June 8.

In the meantime, Alker and Yingjia Huang, assistant deputy director of the California Department of Health Care Services, said the most important thing people can do to prevent any lapses in coverage is to make sure their contact information is up to date.

“If the county cannot find you or get the renewal packet to you, and you do not fill it out by the renewal timelines, there is a potential for that loss of coverage to happen,” Huang said. “And that’s not what we want to see.”

On May 23, her department launched a “Keep Your Medi-Cal” webpage where beneficiaries can find additional information and check and update their contact information.