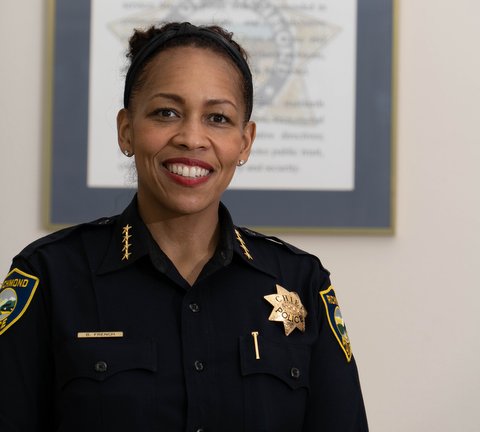 Posted at 10:54h in News, Police by Danielle Parenteau-Decker 0 Comments

Richmond Police Chief Bisa French is back on duty after being on administrative leave since October. (Ray Saint Germain / Bay City News)

Richmond Police Chief Bisa French has been reinstated by the city after being on administrative leave since October after she and her husband — Oakland Police Sgt. Lee French — were accused of abusing their daughter’s boyfriend.

The Frenchs were accused of domestic violence and criminal threats against their then-18-year-old daughter’s 34-year-old boyfriend, Oho McNair, also known as Joe Goldman, according to court records.

The Frenchs accused the man of trafficking their daughter. Vallejo police investigated the couple after McNair’s mother accused them of the alleged threats. McNair was arrested by the U.S. Marshals Service for alleged sex trafficking, charges that were later dropped when the alleged victim refused to testify.

The Frenchs’ daughter obtained a restraining order against them in Contra Costa County in October that’s still in effect, according to court records that say it’s due to expire Oct. 23, 2023. There’s another hearing on the order set for Sept. 29.