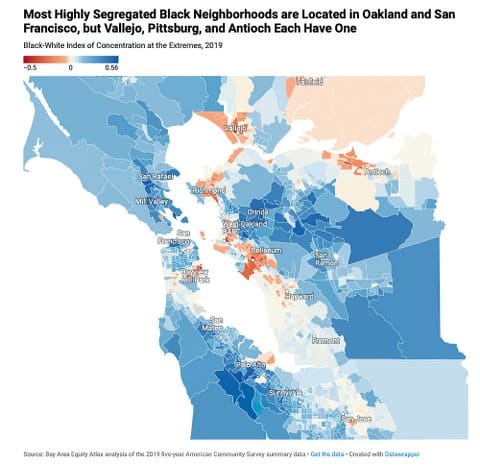 The report is based on an analysis of U.S. Census data down to the census tract level that compares population numbers by race and income.

Eleven of the Bay Area’s 1,572 census tracts are identified in the report as areas of “concentrated racialized disadvantage” for low-income Black residents.

Five such neighborhoods are in Oakland, three are in San Francisco and there is one each in Vallejo, Pittsburg and Antioch, according to the report, which posted July 27 on the Bay Area Equity Atlas website.

“Measuring current levels of racial-economic segregation underscores that deep and persistent pockets of both white wealth and Black, Latinx, and AAPI poverty persist in the Bay Area, despite the region’s diversity and progressivism,” the report says.

A full version of the report can be found at https://bayareaequityatlas.org/mapping-segregation.

The Bay Area Equity Atlas is a partnership between PolicyLink, the USC Equity Research Institute and the San Francisco Foundation.