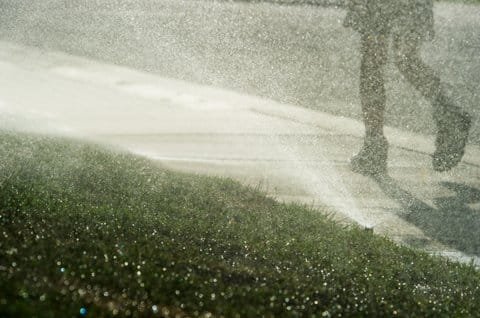 Contra Costa County has restricted outdoor water use, among other steps taken to decrease the amount of water wasted while California is in a drought. (John Chacon / California Department of Water Resources via Bay City News)

The latest statewide water conservation numbers are improving, having more than doubled from May to June, and the Bay Area is leading the way.

In June, statewide water consumption dropped by 7.6% compared to June 2020, whereas in May, Californians reduced water use by just 3.1%, according to a report to the State Water Resources Control Board on Tuesday.

“The second round of the drought emergency regulations took effect at the end of May, and the numbers seem to indicate we’re seeing some positive impacts from that,” said Marielle Pinheiro, a data specialist with the Water Board’s Office of Research, Planning and Performance.

The emergency regulations require all of the state’s 436 urban water suppliers to implement Stage 2 Water Shortage Contingency Plans, which vary from supplier to supplier but can include things like fines or additional charges for over-consumption of water, as well as incentives for conservation and for replacing water-intensive landscaping.

For example, the East Bay Municipal Utility District, which delivers drinking water to 1.4 million customers in Alameda and Contra Costa counties, mandated a 10% water use reduction, tightened restrictions on outdoor water use and reinstated its Excessive Use Penalty Ordinance, which includes fines of $2 for every 748 gallons of water used above a 1,646-gallon threshold, among other things.

“Customer savings figures are moving in the right direction, but we know we must do more,” said EBMUD General Manager Clifford Chan in a news release Tuesday.

“EBMUD asks its customers to continue to conserve, and if they are able, make more changes to make long-term impacts to their water use habits,” Chan said.

Also, in June, the Water Board banned the use of potable water on “decorative or non-functional grass” at commercial, industrial and institutional properties across the state.

“I think the numbers are definitely heading in the right direction,” said Dave Eggerton, executive director of the Association of California Water Agencies.

“It’s positive and only getting better,” said Eggerton, whose association represents hundreds of water systems that collectively deliver about 90% of the state’s water to residential and commercial users.

Water Board chairman Joaquin Esquivel said June’s conservation numbers are heartening since they come on the heels of two months, March and April, that saw statewide water use numbers increase by 18.7% and 17.8%.

“What is important to see is that turn around,” Esquivel said. “We did pass in late May our [regulations], all water agencies are now at Level 2 of their Water Shortage Contingency Plan, and we began banning the irrigation of non-functional turf.”

In June, all of the state’s 10 hydrologic regions reported a decrease in water use, with the Bay Area heading up the list with 12.6%, followed by the North Coast and San Joaquin River regions with a bit over 10% each.

The South Coast region, which includes Los Angeles and San Diego and is home to more than 55% of the state’s population, recorded a nearly 6% drop in water use.

“We met with the governor recently, and he made it very clear that he wants to see this happen,” Eggerton said. “It’s a critical part of our response to the drought.”

>>>Read: As Climate Change Worsens, ‘We Have No Future’

Eggerton also said the state needs to continue investing in water storage and delivery systems in order to build resiliency in the face of ongoing temperature rise and precipitation declines.

“We really need to capture as much [water] as we can when we do have wet years, so we’re in a better position to deal with the challenges we have now,” he said.