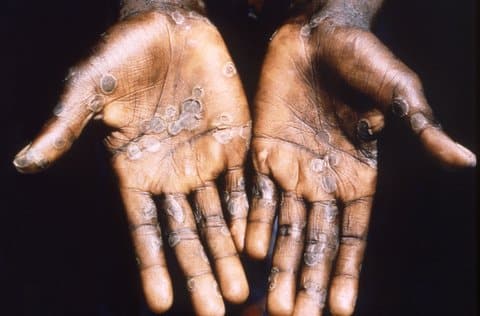 The palms of a monkeypox case patient during a 1997 outbreak in the Democratic Republic of Congo. (CDC via Bay City News)

Backed by a slew of public health leaders and politicians on the state and local level, state Sen. Scott Wiener, D-San Francisco, led the first meeting of the California Legislature’s new Senate Select Committee on Monkeypox on Tuesday afternoon.

This spring, the viral disease rapidly made its way from central and West Africa to the United States and other parts of the world, mainly contracted by close skin-to-skin contact between people.

As cases rose in California, Gov. Gavin Newsom declared a state of emergency last week and the selected committee formed in response.

“Monkeypox is a public health emergency, and we need to do everything we can to contain the outbreak,” said Wiener said in a statement. “Monkeypox is a painful and serious infection, and no one should have to endure it. We need to ensure California’s response, at both the state and local level, is effective and adequately funded. Our community is depending on us to deliver.”

Weiner believes the federal government could have done more to keep up its stockpile of the Jynneos vaccine, a smallpox vaccine that’s proven to be effective for monkeypox. Over 20 million vaccine doses expired without replacement, he said at Tuesday’s meeting.

“You would think that would be a recipe for very quickly controlling an outbreak. Unfortunately, due to some very severe public health failures over a number of years and three different presidential administrations, that has not happened and we have shot ourselves in the foot,” he said.

Weiner said seeking out a vaccine in San Francisco feels “a little bit like the ‘Hunger Games.’ ” It creates further barriers for low-income, marginalized communities to access the vaccine, his office said in a statement.

As of Tuesday afternoon, San Francisco has about 500 cases, which are disproportionately found amongst gay and bisexual men. The city makes up 36% of all monkeypox diagnoses in California, according to Dr. Grant Colfax, director of health for the city and county of San Francisco.

“If and when more state and federal resources come to bear at the local level, we will be able to harness them more rapidly and potentially draw down for reimbursement of the expenses that are currently occurring that are not in the budget,” said Colfax at the meeting.

The city has already administered close to 12,000 vaccine doses, and it has the capacity to vaccinate 3,000 people a day at over 15 vaccination sites. But in order to fully vaccinate individuals considered to be high-risk, the city will need about 150,000 vaccines, said Colfax.

“Really, we need so many more vaccines to meet the demand right now,” he said.

Monkeypox is not a new disease, and it’s rarely deadly. But it can cause severe pain, scarring and hospitalization, said health care workers sharing their experiences at the meeting.

Many patients are experiencing fever, malaise, muscle aches, and a pox-like rash with fluid-filled vesicles on the skin, said Vivek Jain, associate professor of medicine and infectious diseases at University of California, San Francisco. Eventually the lesions heal and the rash will crust over, but the process can take weeks, he said.

“Many patients have many lesions, and some of our patients are unfortunately experiencing very severe pain in the throat and the pharynx, or at the rectum and the genitals,” Jain said. “This is truly causing a tremendous degree of suffering, including difficulty with eating or drinking fluids and very severe difficulties with having bowel movements.”

Jain says California can do four things to improve its response to the monkeypox epidemic: fund front-end clinical locations like urgent care centers, STD clinics and emergency departments; make access to medicine easier for patients; provide more research on how to test and treat monkeypox; and provide patients temporary places to stay to get better.

“Our infectious disease community is building on a lot of lessons learned during California’s COVID response and taking advantage of a lot of infrastructure that’s been built the past two years, including vaccination sites,” said Jain. “We’re 100 percent committed to rising up and meeting this challenge that is being posed to our patients and our communities, and we need the leadership of the legislature to help us quickly act on all of these fronts as we are right now in a critical early phase with the response.”

LGBTQ+ advocacy groups like the San Francisco Aids Foundation are also stepping in to amplify and disseminate vital information — both to prevent the spread of the virus and its stigma. CEO Tyler TerMeer wants to ensure that the LGBTQ+ community does not experience the same discrimination it faced amid the AIDS crisis in the ’80s.

“For two and a half years, our public health systems have been developing, improving and self-healing to combat the worst global pandemic in a century,” said TerMeer. “And yet, when confronted with the new outbreak in May of this year, federal health agencies failed to treat this threat with the urgency and commitment that it clearly demanded.”

TerMeer pointed the finger at a combination of “misjudgment, mismanagement and miscommunication” that left state and local health agencies without the resources that they needed to adequately prepare and respond.