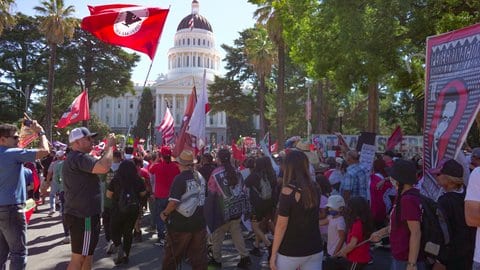 Members of the United Farm Workers and labor rights advocates finished a historic 355-mile route to the California State Capitol on Aug. 26 to urge Gov. Gavin Newsom to sign Assembly Bill 2183, though his office released statement rejecting the bill as it stands.

AB 2183 would give farmworkers the option to vote for or against unionization through mail-in ballot or drop off their vote at an Agricultural Labor Relations Board office instead of having to vote at their place of employment.

“Voting should be done away from the ranches and away from the companies. Many times there is a lot of resistance from the owners of the ranch and their companies,” Napa farmworker Vianey Enriquez said, as he marched waving a red and white UFW flag displaying its black eagle symbol. 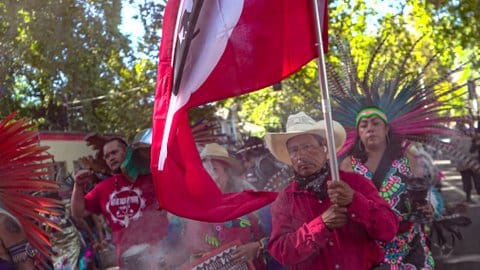 Vianey Enriquez said he and his fellow farmworkers should be able to vote on unionization away from their employers, who are often resistant to the idea.

The 24-day protest gathered support from local communities from Delano in Kern County to Sacramento as they rallied every afternoon in a new city or town. At the center of the movement, more than a dozen farmworkers led by UFW President Teresa Romero undertook the whole pilgrimage, a physical feat that had only been achieved once before. 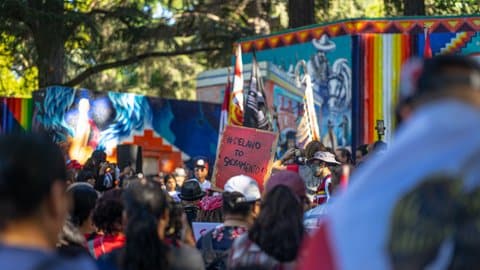 The farmworkers march to the State Capitol in support of AB 2183 began in Delano, California. The marchers followed a similar route to one led by Cesar Chavez and Dolores Huerta in 1966.

The UFW, then called the National Farm Workers Association, led by Cesar Chavez and Dolores Huerta marched for the voting rights of farmworkers in the spring of 1966. But this time, in 2022, apart from the constant pain of blistered feet, farmworkers endured the triple-digit heat now regularly seen in Central California during the summer. 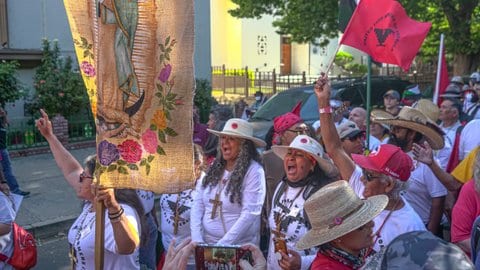 United Farm Workers’ female leaders lead the final leg of the 355-mile journey to the California State Capitol on Friday.

On Friday morning, the protest began its last leg. More than 3,000 people gathered and marched from Southside Park outside of downtown Sacramento to the State Capitol.

Among them, hundreds of farmworkers from different parts of California arrived at the park on charter buses to participate in the nearly one-mile protest. 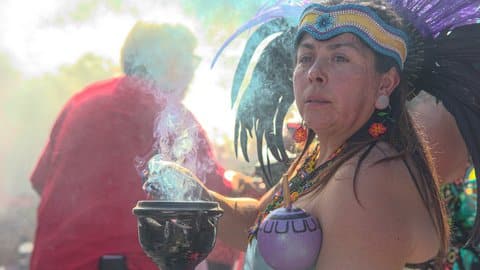 An Aztec dancer releases smoke during a prayer dance by Southside Park in Sacramento on Friday. She and other Aztec dancers participated in the final leg of the 355-mile journey to the California State Capitol. 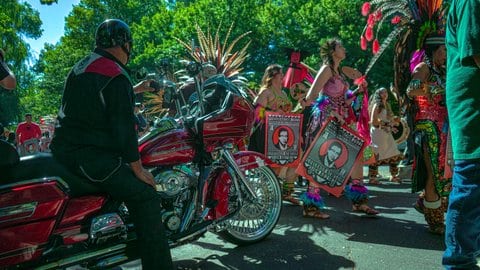 A biker parked by Southside Park in Sacramento on Friday plays music as he watches marchers pass by. He and other bikers participated in the final leg of the 355-mile journey to the California State Capitol.

Romero took the stage before they began marching. She told the marchers about the news UFW staff had received from Newsom’s administration.

Newsom would not support the bill, and changes would need to be made before he considered signing it.

With confidence, Romero urged farmworkers and supporters to continue advocating for AB 2183 and stated that they would march again if need be.

In a statement released to media outlets, Newsom’s communication director Erin Mellon said the governor is eager to sign the bill. “However, we cannot support an untested mail-in election process that lacks critical provisions to protect the integrity of the election, and is predicated on an assumption that government cannot effectively enforce laws.”

The statement ended with Mellon stating the administration welcomes negotiations with UFW. 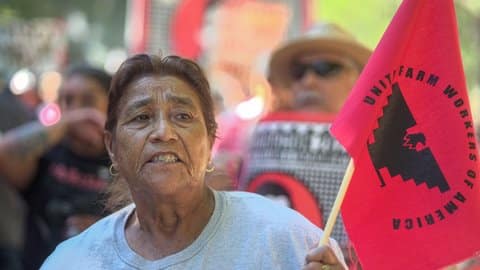 Farmworker Estela Tapia marches waving the UFW flag during the final leg of the 355-mile journey to the State Capitol.

And although it is illegal to intimidate workers trying to unionize, voting at their workplace with their employers over their heads does affect fair elections, Enriquez said.

“We are marching for an opportunity,” he said.

Enriquez has been a grape harvester in Napa for over 40 years, starting when he was 18 years old. He has worked on many lands, including the farm owned by the wine company Newsom co-founded.

“We farmworkers work for him. It is unjust that he will continue to not give us his signature,” Enriquez said.

Last year, union members advocated for AB 616, a similar bill that Newsom vetoed because of “various inconsistencies and procedural issues related to the collection and review of ballot cards,” he said in a statement.

This year, the farm workers organized the march to bring awareness to the bill in hopes of pressuring Newsom to sign AB 2183.

As the marchers reached the final destination, the State Capitol, thousands gathered at a rally. Marchers who had made the whole journey were announced and applauded for their effort. 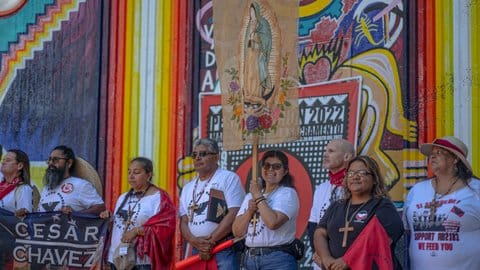 Marchers who would complete the entire 355-mile journey lined up on stage before the start of the final leg.

One of them, activist and KPFA radio host Miguel “Gavilan” Molina reminded the crowd of the economic power farmworkers hold and of the power they have outside of the farms.

“Us campesinos will not be denied. And remember, Gavin, the midterm elections are around the corner,” Molina said on the Capitol steps as the crowd roared in agreement to voting against Newsom in the upcoming elections if the AB 2183 is not ultimately signed.