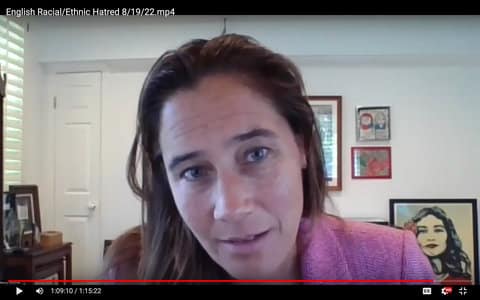 18 Sep Hate on the Rise, Politics Partly to Blame

Posted at 16:06h in National, People by Danielle Parenteau-Decker 0 Comments

Becky Monroe of the California Civil Right Department said hate crimes in the U.S. are both on the rise and underreported. (Screenshot captured by Danielle Parenteau-Decker)

Violent attacks, discrimination and other expressions of hate are up in the U.S. against many groups of people.

Personal stories and expert analysis about that increase in hate around the nation — and what can be done about it — were the focus of an Ethnic Media Services panel convened Aug. 19.

“Racial and ethnic hate — both interpersonal expressions of hate and acts of violence — is on the rise, along with deepening political polarization, distrust of civic institutions, and widening racial, ethnic and class divides,” said EMS director Sandy Close.

The correlation between political events and hate crimes was explained by Brian Levin, a professor of criminal justice and director of the Center for the Study of Hate & Extremism at CSU San Bernardino.

“Dec. 6, 2019, when impeachment was announced against Donald Trump, that was the worst day of the year for hate crimes,” he said. Additionally, June 2020 — the month after George Floyd was murdered — “was the worst month for anti-Black hate crimes since we’ve been recording stuff. There was also a spike in anti-white [crime].”

One of the most glaring examples of hate driven by politics in recent times is the misplaced blame for the coronavirus.

Manjusha Kulkarni, executive director of the Asian Pacific Policy and Planning Council, shared the story of a child at a Los Angeles middle school who was accused of having COVID-19 and told to go back to China. After the boy said he was not Chinese, a bully punched him in the head — 20 times.

As U.S. president at the time, Donald Trump was the most obvious source of the racist vitriol that cast the coronavirus as a Chinese problem. But it was a “coordinated effort,” said Kulkarni, a co-founder of Stop AAPI Hate.

She said the Republican Party gave candidates a 50-page brief “on how to talk about COVID” in anti-Chinese language.

Stop AAPI Hate broke down reported incidents by ethnicity and found that people of Chinese descent accounted for 42.8% of reports — far more than with any other Asian or Pacific Islander background.

Overall, there were a record number of anti-Asian crimes in 2021, according to Levin. But virtually no one was safe.

Levin said that 2021 saw increases in crimes against not only Asians but also people who were Black, white, Jewish, Latino or transgender. “We’re seeing more homeless as victims” as well.

Hate crimes are not just increasing in number; they’re getting more violent, Levin said. He said that is partly because of “the sociopolitical milieu we’re in” and partly driven by social media, which “has become an incubator and toxic cauldron.”

While hate crimes are a growing problem, it’s not clear truly how big the problem is.

“We know hate crimes are underreported,” said Becky Monroe, the deputy director of strategic initiatives and external affairs for the California Civil Rights Department. “There is no question, when you look at the data, that hate crimes are on the rise [and] that they are also underreported.” (The Civil Rights Department, which was renamed July 1, was formerly known as the Department of Fair Employment and Housing.)

According to Monroe, 8,263 hate crimes were reported by law enforcement agencies to the U.S. Department of Justice in 2020, the most recent year for which federal data is available. However, the National Crime Victimization Survey puts the number close to 250,000.

The DOJ figures are based on the FBI’s Uniform Crime Reporting program. But state and local law enforcement agencies are not required to report hate crimes to the UCR. Some don’t report at all, but even some of those that do skew statistics.

And many people affected by hate crimes do not go to the police. “Most victims are not going to report in the most vulnerable communities,” Levin said.

“While some may want to go to law enforcement to seek additional support, for many that does not feel like a safe option,” Monroe said. To give people more options, she said, the state developed “California vs. Hate, which will be a resource line and network to support people who are targeted for hate.”

Kulkarni said that the Southern Poverty Law Center found problem links between white supremacists and police. “Quite a bit of infiltration by white supremacist groups, not only in police departments across the country but also in our military,” Kulkarni said. That was reflected in the Jan. 6, 2021, insurrection in which a number of law enforcement individuals were involved.

“That’s another reason why we can’t rely simply on law enforcement as the solution,” she said.

The most important elements in addressing hate are “civil rights, education equity and community safety,” she said.

The last is “not just about policing but about safe housing, good jobs, living wages.” She also called for ethnic studies in K-12 curriculum, “broad-based civil rights laws,” workplace discrimination trainings and “something outside of mass incarceration.”

Evidence has not demonstrated “that criminal hate crimes prosecution provides any sort of deterrent for future hate crimes,” Levin said.

In fact, incarceration can even make things worse. “Remember, if you send people to prison, that’s a crash course for hate as well,” Levin said.

But he said he would not count out law enforcement entirely.” He pointed to Boston in the late ’70s. “It was a town where lawlessness, with regard to racial hatred, ruled the day.” He said that hate crimes dropped “when we started apprehending violent offenders and prosecuting them.” He also said that part of the problem today is that many hate crimes are not prosecuted.

He acknowledged that policing and prosecution alone are not the answer, however.

“It depends on the type of offender,” he said. “We have to have a flexible response.”

Sasanna Yee, a community wellness activist, shared the story of her grandmother, the victim of a fatal attack near her San Francisco home. Yee previously spoke on a Feb. 25 Ethnic Media Services briefing on racism and violence against Asian and Pacific Islander people.

She said that in addition to figuring out how to combat hate, we need to reconsider how we talk about it.

“ ‘Oh, you are anti-Black’ or ‘You are anti-Asian.’ These are very inflammatory words, and hate begets more hate,” she said. “So I encourage us to create a culture of belonging … to even use the word ‘hate’ less.”

The park where Yee’s grandmother was attacked will be renamed in her honor.

“It is important to note that a Black elder in the community suggested this initiative, this naming,” Yee said, “and it’s a very potent symbolic gesture and concrete gesture of solidarity.”

The decision to rename Visitacion Valley Playground was approved in May. Yee hopes signs will be put up next May, which is Asian Pacific Islander Heritage Month, with the new name: Yik Oi Huang Peace and Friendship Park.