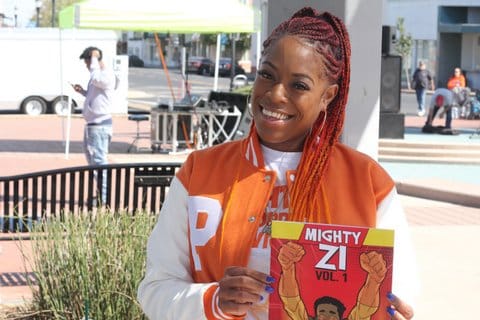 Parris McChristian lost her mother to gun violence at the age of 3. After it took her son’s father too, she decided to write a book. (Malcolm Marshall / Richmond Pulse)

Editor’s note: “Mighty Zi Stopping Gun Violence” is a new children’s graphic novel written by Parris McChristian, 35, of Antioch. It’s a story about a young superhero’s quest to stop gun violence, born from the author’s own tragedies. The book is co-written by Uzziah James and illustrated by Cameron Wilson. This conversation has been lightly edited.

Richmond Pulse: Why did you want to write a book for kids about gun violence?

I was initially going to write a book about sign language for children. And then I redirected myself and decided that I need to spread some awareness in our community, and start with the children and the youth. We all have to leave here one day, and I’d like to do something to prevent and change something in the minds of children today, plant the seeds today so that the children can become leaders of tomorrow.

I want my son to be a leader, I don’t want him to follow what he sees on the TV, or what he hears in the music. So that’s why we wrote the book, my desire to stop gun violence.

RP: What is that you want kids to get from the story?

PM: I’m not going to give a full spiel on the book, but my son, who is the main character in the book, he goes around in the story, which based on real-life scenarios. As he goes around, he takes the guns from the people, he puts them in his magic backpack, and it turns into something else.

RP: How did the idea for the story come to you?

PM: By prayer and fasting in my quiet place and quiet time. I just ended up listening and writing what came to me.

RP: How does feel to start with just an idea and get to this point of having a book completed and for sale?

PM: It’s still surreal. I did it. And it’s it happened so fast. We released the book in June, and we’ve already sold over 100 copies online. We’ve been invited to events where I can speak and spread more awareness. It hasn’t been me going around, looking to spread it; the message is actually coming to me. So I know I’m doing God’s work. And I think, God, that is fun. I’m just grateful. I do outreach work in the community all over the Bay Area. We do story time with my designs, stopping gun violence, where we read the book to children in the schools, and we also do pop-up events.

RP: Did you ever think you’d be an author one day, especially of a children’s book?

RP: It seems like every day we hear about another death due to some violence, whether it be community violence, hate-fueled violence, a mass shooting, etc. What goes through your mind when hearing about another tragedy and another family having to deal with a loved one taken away from them?

PM: It saddens me to hear when someone else has to endure the same pain I’ve felt. I don’t think people realize the effect death takes on the ones left behind and the toll it takes on the family and family dynamics in our community. It’s heartbreaking each time because I know what they will face in the days, weeks, months, and years ahead.

RP: The book is for young people. But what has it done for you personally?

PM: It makes me know that my mother’s death didn’t go in vain and that my son’s father’s death didn’t go in vain, that I’m doing something positive. Instead of turning it into a negative. One day, I have to tell my son what happened to his father. I’ll be able to open that book and read it to him and give him a better understanding of why his father was taken away from him. And hopefully, other parents can use that book as well as a tool to communicate to their children about what’s going on around them and what’s going on in the communities around us.

RP: I’m so sorry for your loss. It is truly inspiring that you have turned your pain into something so beautiful for children in our community.

RP: So how do people find the book?

PM: You can find the book on Amazon, Barnes & Noble and all the online outlets.