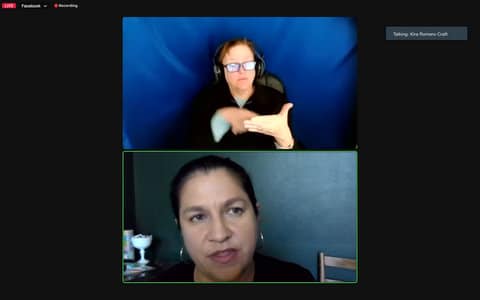 Posted at 10:58h in National, Politics by Danielle Parenteau-Decker 0 Comments

Kira Romero-Craft of Demos, bottom, said “the infrastructure of American democracy” is “being used again as a weapon” during a Sept. 30 Ethnic Media Services briefing. Also pictured is a sign language interpreter who was not identified. (Screenshot captured by Danielle Parenteau-Decker / Richmond Pulse)

People of color voted in significant numbers in 2020. And in response, some legislators across the U.S. responded by making it harder for them to vote in the future.

These ongoing attempts to disenfranchise voters — particularly persons who are disabled or not white — were the focus of an Ethnic Media Services online press briefing Sept. 30 titled “Threats to the U.S. Electoral Process – Who Can Vote, Whose Vote Counts?”

Sean Morales-Doyle, acting director of the voting rights program at the Brennan Center for Justice, reported that there has been a long history of voting rights battles in the U.S. He added that problems have increased in scope.

The 2020 election saw an unprecedented turnout of voters of color, said Kira Romero-Craft, director of legal strategies at Demos.

Data management firm Catalist said in a report that “2020 was the most racially diverse electorate ever. This was due to big turnout increases in communities of color, particularly among Latino and Asian voters.”

It found that turnout among Asian American and Pacific Islander voters increased by 39% compared with the 2016 presidential election; among Latinos, turnout was up 31%. Turnout among Black voters slightly outpaced that of both college-educated and non-college-educated white voters, though all three groups saw increases.

The 2020 election was the subject of conspiracy theories, such as that it was bought, it was rigged, and there was fraud. The lies about the election were often racist and largely “fueled by fear,” Morales-Doyle said.

Those lies were used to cast doubt on the entire electoral process and place blame on particular communities. “The biggest threat to our democracy right now is efforts to undermine faith in the democratic process,” he continued.

Also, voting districts in many places were redrawn so that people of color would not have a legitimate chance at voting for a candidate that looks like them or represents their interests.

“This is the infrastructure of American democracy,” Romero-Craft said. “It is a system that has been used historically to disenfranchise voters, particularly Black voters.” Today, she said, it is “being used again as a weapon.”

Letting the system be weaponized affects us all, she said. But some groups are affected more than others.

The state of Alabama was sued for drawing its congressional districts in a way that prevents Black voters from being able to vote for candidates they most likely would want, said Evan Milligan, executive director of Alabama Forward, a nonprofit that works to increase civic engagement and political participation and promote race and gender equity in that state.

A U.S. circuit court ruled against the state, saying the evidence was overwhelming, according to Milligan. Two of that court’s three judges were appointed by President Trump. The court ordered Alabama to reconfigure its districts, but the state refused and appealed the decision. Ultimately, the Supreme Court voted 5-4 on Oct. 4 to allow Alabama to keep the districts as is for this November’s election.

A similar fight is underway in Florida.

“The Black districts were cut in half by Gov. [Ron] DeSantis’ redistricting efforts,” said Romero-Craft. She said it “could take months or years to address.”

Manipulating districts not only affects which candidates have an actual shot at winning but also who runs for office and how they campaign. “If they’re prevented from serving at certain levels just because of their skin color, why would they stay here?” Milligan asked. Additionally, when candidates don’t have to appeal to different groups of people, they can run to the extremes, he said.

Redistricting is just one way certain people are prevented from voting or having their votes count. The large service industry in Florida means there are many shift workers who are not given time off to vote, Romero-Craft said. Many are not aware they can vote by mail or don’t know how.

Milligan said low voter turnout in Alabama could be partly blamed on the state’s low minimum wage — $7.25 an hour — and high taxes on essentials like food and medicine, as well as its decision to opt out of the temporary expansion of Medicaid.

“When we have people living in a state where their needs are not being met,” he said, they have no incentive to get involved in the political process. “So they stay home.”

People also don’t have time to vote or to learn about the candidates, the issues or their options for casting a ballot, he said.

Michelle Bishop, voter access and engagement manager of the National Disability Rights Network, said there is significant overlap between disabled voters and other historically disenfranchised voters.

Many voters who have a disability are also poor, a person of color or a member of the LGBTQ+ community. About 40 million people who are eligible to vote in the U.S. have a disability, she said.

Turnout is low among those people not necessarily because of a lack of interest, Bishop said, but because of barriers put up over time to prevent participation in the electoral process.

They often target disabled voters and those who have a limited understanding of English. The voters are sometimes asked questions by poll watchers “when nothing inappropriate is happening,” Bishop said.

She also said there has been an increase in unnecessary closures of polling places, which are often blamed on alleged violations of the Americans With Disabilities Act. Officials would say polling places were inaccessible but offered no evidence. Bishop pointed out that closing polling places makes voting inaccessible to everyone.

Bishop was asked what the biggest challenge was for disabled voters. But she said it depends on the nature of a person’s disability. A person who uses a wheelchair might be sent to a polling place with stairs. A blind person might be given a paper ballot they can’t fill out.

Despite these challenges, however, Milligan remains hopeful.