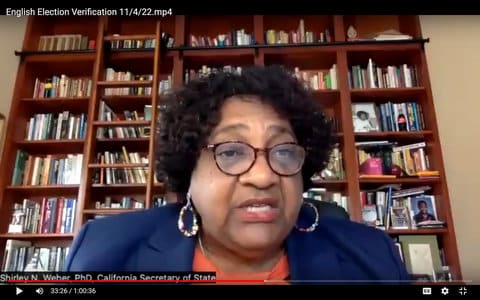 California Secretary of State Shirley Weber said her office has been sued many times by people looking to discredit 2020 election results, but “they have all failed.” (Screenshot captured by Danielle Parenteau-Decker / Richmond Pulse)

It is Election Day in the United States, but many people still have doubts or questions about the voting process.

Some don’t fully understand what they need to do to make sure their vote counts or what the government does to ensure accuracy. Others assume there must be something wrong if an election doesn’t turn out the way they wanted.

Ethnic Media Services hosted a news briefing Nov. 4 on the election process, looking at these issues. Derek Tisler, counsel in the elections and government program at the Brennan Center for Justice, provided an overview of how elections work, followed by California Secretary of State Shirley Weber and her staff who discussed how things work here.

“People have genuine and understandable questions about the elections process,” Tisler said. He acknowledged that the process can be confusing, particularly because each state does things differently.

“It can be difficult to get the right information about how you can cast your ballot, how your vote is counted at the end of the day,” Tisler said. He added that if people have questions, they should ask local election officials or poll workers.

Election officials take many steps “to protect the vote and to reach an accurate outcome,” he said. And they prioritize safety and accuracy over speed.

He said people should be aware that’s the reason results are not finalized the same day voting takes place. The numbers reported on election night come from a mix of early votes that have already been counted and vote projections.

He gave the example of officials in a New Mexico county who acted improperly. The New Mexico Secretary of State sued them in the state Supreme Court.

“Those officials were very quickly ordered to certify the outcome of the election because, again, they had no legal authority whatsoever to withhold certification or to decertify results in any way,” he said.

Federal officials are not generally involved in election operations. The primary exception is the presidential election. It is up to the U.S. Congress to certify those results, which is what people were trying to stop during the Jan. 6, 2021, insurrection at the Capitol.

California does not have the same issue of election deniers as some other states, Weber said. But it is not free from them either.

She said there have been more than 50 lawsuits filed in California in an attempt to overturn 2020 election results. Many have even been filed since she took office in 2021.

“They have all failed,” she said. “There’s nothing to them. There’s no there there.”

She shared what one judge wrote in his ruling against one lawsuit. “Charges require specific allegations and then proof. We have neither here,” she reported.

Steve Reyes, chief counsel in the secretary of state’s office, said it is a “large drain on resources to have to deal with all these complaints,” which he said are often a stretch, completely fabricated or based on a lack of understanding.

If people have concerns, they do have the right to watch what happens at polling places.

Tisler said allowing poll observers is necessary for transparency. Weber said people can ask to watch votes being counted as long as they don’t interfere. They also can’t count votes themselves.

“Elections are conducted in public,” Tisler said. “And it’s important that people are able to monitor what’s happening and make sure that election officials are following all of the state’s procedures correctly.”

But some people are not content merely to watch. Rather, they are “intent on disrupting the process,” he said.

He said it is against federal law to intimidate voters or poll workers, even if that was not the person’s intent. If people feel someone is trying to prevent them from exercising their right to vote, they should tell a poll worker while they are at the polling place. They can also contact election officials or call the National Non-Partisan Election Protection Hotline at (866) OUR-VOTE (687-8683).

Tisler also said voters should call the police if they feel threatened. Weber said that poll workers are trained to handle and deescalate incidents of intimidation and call law enforcement if all else fails.

Voter intimidation is not as big a problem in California as in other states, however.

“We have not seen [the] level of threat to voters or poll workers that we’ve seen in other states,” Weber said. “We don’t have people marching in front of our boxes with guns, with fatigue outfits.”

Weber said her office gets lots of questions about how long it takes to get votes counted and ballots being rejected. One reporter in the briefing asked about 105,000 California ballots that were rejected in one election.

Weber put things in perspective. She said that while every vote is important, that is a very small percentage of the 20-some million ballots the state has to deal with.

She said that ballots are most often rejected because the voter has not done what is required of them. For mail-in ballots, they must sign the envelope and make sure it is submitted in time. The signature must match or compare to the signature on file with your registration, said Susan Lapsley, the assistant secretary of state, who is responsible for voting systems and security.

In California, a mailed ballot will be accepted as long as it is postmarked by Election Day. Weber said that people sometimes put their ballot in a mailbox at 6 p.m., for example, thinking it’s soon enough because polls don’t close until 8 p.m., but then it turns out the last pickup was at 5 p.m.

People can also deposit their ballot at an official drop-off box.

If you are reading this before 8 p.m. Tuesday and have not yet voted, you can still go to your polling place to cast your vote or turn in a signed and sealed mail ballot. You just need to be in line by 8 p.m.

If you have already voted, you can check the status of your ballot online with California’s Where’s My Ballot? feature.