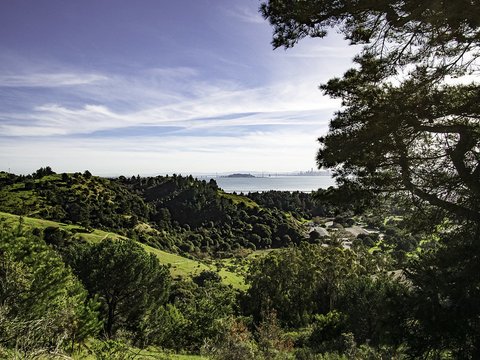 During the COVID-19 pandemic, more people started visiting East Bay parks. And it had consequences.

The East Bay Regional Parks District is composed of 125,000 acres of protected land that exists for the benefit of the public and wildlife that calls it home. While the district encourages visitors to visit parks, it also warns that people’s behavior can make parks dirtier, take park workers away from other duties, and even put animals at risk.

“These are our lands — belongs to everyone — but with that ownership comes responsibility,” said Dee Rosario, an East Bay parks board member. He spoke during an Oct. 18 news briefing hosted by Ethnic Media Services and the parks district.

Rosario said people need to take care of the land and think about how they treat each other, the animals and the environment.

Bell said there are “three main things the public can do” — or, rather, three things they shouldn’t do — to lessen their impact on animals in the parks. One is, don’t feed or disturb the animals that already live there, and don’t release ones that don’t into the parks.

Feeding just one animal can lead to others concentrating in an area. Over time, Bell said, this can cause health and behavioral problems in animals, and they can become aggressive and lose their fear of humans.

Becky Tuden, ecological services manager in the stewardship department, asked people to be mindful of many animals that live in the parks. “You’re in their house,” she said.

Joe Sullivan, the district’s fisheries program manager, said he recently saw a white rabbit in a park that was clearly an abandoned pet.

He said people sometimes turn pets they don’t want anymore loose in the parks, thinking it will be a better life for them. But domesticated animals are not equipped to live in the wild and that rabbit he saw probably didn’t last long, he said.

“No. 1 threat to aquatic life is people releasing aquarium species into the lakes and streams,” he said.

The animals that people put in the water typically come from pet stores and can carry diseases that could wipe out entire populations of species. He mentioned a frog-killing fungus that was directly connected to pet store fish.

It is not just pets that people release, however.

People also release fish as part of some religious ceremonies. Sullivan said the district wants people to be able to practice their faith, but in a responsible way. If people want to release fish for religious reasons they should ask permission. The district can provide fish that have been tested for diseases and are clean.

As for taking fish from park waters, fishing is allowed and encouraged in designated areas. In the district there are 10 reservoirs and four piers for fishing. People are not allowed to fish from streams.

The panelists repeatedly reminded people to be more mindful of how they treat the land when they visit the parks.

“You individually aren’t a problem, but you have to recognize” that you are not the only one, said Tuden, referring to people who might think it’s no big deal if they go off trail or let their dogs run uncontrolled, for example.

Bell said people often ignore or don’t notice signs telling them to stay on trails, among other things.

Those signs are there to protect you and the park, he said. “Give wildlife their space. Stay on the trail.”

He also said the district will sometimes close or alter trails to protect animals. If too many people walk past a golden eagle’s nest, for example, that can scare the birds off. It can cause them to abandon their nest and leave their babies vulnerable.

With many more people visiting the parks, Tuden said litter has become a big problem. Workers now have to spend a lot of time keeping the park clean. It can seem to be a never-ending task as she said they end up in a cycle of cleaning picnic areas, cleaning restrooms, picking up trash and emptying trashcans.

She also said park visitors need to think about “what it means to be a steward of the land … Stewardship means protection. It means care.”

“Once you care about something, you’re going to take care of it,” she added.

Bell, who grew up in the Bay Area, said people need to take care of the parks so they will be available for future generations.

Tuden said that keeping the parks in good shape for the wildlife and the public “is a delicate balance.”

“Each culture brings its own interpretation of what it means to enjoy nature,” said Rosario, the first Filipino American and first person of Asian descent on the parks board. “How do we meet the needs of all these different cultures?”

He said that access is one of the biggest barriers preventing more people from enjoying the parks. Earlier this month, the San Francisco Chronicle published a list of eight top trails in the Bay Area that are accessible by public transportation, though they are not necessarily part of the East Bay district.

To find out more about the East Bay Regional Parks District, visit ebparks.org.