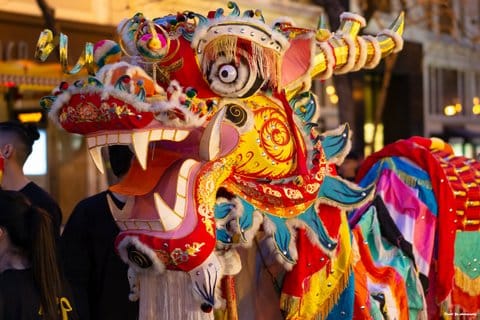 23 Jan The Long, Overlooked History of Lunar New Year in the U.S.

Around the world, Lunar New Year is celebrated in many unique ways: as 春节 (Spring Festival) in China, Tết Nguyên Đán in Vietnam, 설날 (Seollal) in Korea, ལོ་གསར་ (Losar) in Tibet, Цагаан сар (Tsagaan Sar) in Mongolia, not to mention diaspora communities across the globe.

While ancient traditions are frequently discussed, the more recent history of these celebrations is less well-known. In the U.S., Asian Americans developed their own Lunar New Year traditions that were inflected by immigration, international relations, orientalism, and complicated relations with mainstream American society.

The origins of the term “Lunar New Year”

The English term “Lunar New Year” is actually a misnomer: The holiday is based on a lunarsolar, rather than a strictly lunar, calendar.

Lunar calendars have one major flaw: 12 full moon cycles last around 354 days, just short of a solar year. To bridge this gap, many cultures incorporate solar patterns into their calendars.

The calendar used by many countries within China’s sphere of influence is speculated to have originated during the Xia dynasty (2070 – 1600 BCE). Though the new year based on this calendar may have been celebrated during the earlier Shang dynasty, its date was fixed during the Han dynasty, roughly 2000 years ago.

Still, not all cultures that celebrate Lunar New Year use this calendar. For instance, Tibet and Mongolia use their own calendars to determine the dates of Losar and Tsagaan Sar, respectively. These holidays do not always overlap with the dates of Chinese-originated New Year, pointing to the lack of specificity in the term “Lunar New Year” and the even more inaccurate “Chinese New Year.”

So where did the English term “Lunar New Year” originate? One theory dates its beginnings to the 1920s, during the height of Western colonial expansion: Examples include a missionary in China, a travel writer in French-occupied Vietnam, and a train rider in Changsha, China. 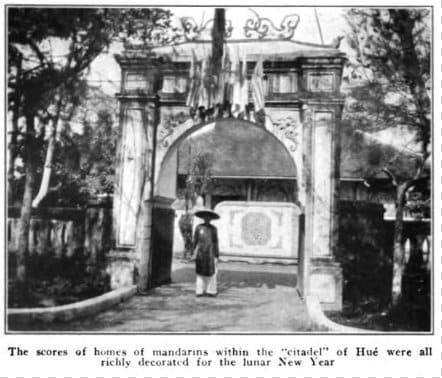 “The scores of homes of mandarins within the ‘citadel’ of Hué were all richly decorated for the lunar New Year.” (Photo courtesy of Ethnic Media Services)

The history of US Lunar New Year celebrations

According to the Smithsonian, the first documented Lunar New Year celebration in the U.S. was a “feast” held by a Chinese businessman for American upper class attendees on Feb. 1, 1851. The first community-driven celebration occurred in the 1860s, when Cantonese immigrants in San Francisco fused traditional New Year practices with a uniquely American format: the parade.

In 1912, the Republic of China under Sun Yat Sen controversially eliminated the holiday ostensibly to distance itself from the recently defeated Qing Dynasty. To show support for the new government, most Chinese Americans stopped observing the holiday. Celebrations, however, were soon revived — though with a different ethos. 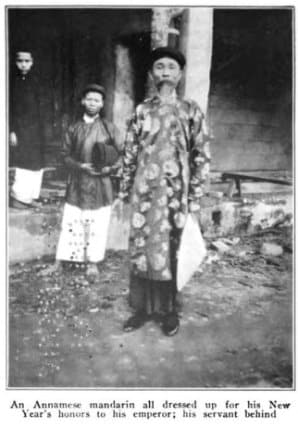 “An Annamese mandarin all dressed up for his new year’s honors to his emperor; his servant behind.” (Photo courtesy of Ethnic Media Services)

In 1931, the San Francisco Chinese Chamber of Commerce organized a Chinese New Year Parade. Leaders realized that Orientalist portrayals of Asian culture would attract business to Chinatown. As a result, the event featured new additions specifically aimed at an outsider audience, such as Chinese American women serving guests as “Chinese maids.” This shift, Yeh writes, made festivals less accessible to the Chinese community: Firecrackers were banned again after visiting whites unsafely set them off, and events had limited and costly seating that excluded the local population.

During the Cold War, Chinese Americans were subject to a different kind of scrutiny: the pressure to prove their loyalty to the U.S. Thus, the 1951 revival of the parade in San Francisco was explicitly anti-Communist, to demonstrate the community’s patriotism. These celebrations continued as the New Year was cancelled again under China’s communist government from 1967 until its reinstatement as the “Spring Festival” in 1980.

The 1970s also marked the arrival of refugees from Vietnam, who who brought celebrations of their new year, Tết. To these refugees, however, Tết was marked by wartime trauma and homesickness, and colored by memories of the Northern Vietnamese coalition’s surprise attack during the 1968 Tết offensive.

At the same time, Tết celebrations promoted intra-communal support and the preservation of cultural identity. A 1977 celebration in New York, for instance, raised money to support other Vietnamese refugees still in Asia. Meanwhile, Vietnamese-lead grassroots organizations in Virginia organized a Tết festival for local refugees in 1979.

Meanwhile, many Koreans also came to the U.S. in the 1950s. However, the celebration of their New Year, or Seollal, was impacted by a long history of repression in their home country. Seollal was banned during Japanese occupation in 1907 and continued to be prohibited during Syngman Rhee’s dictatorship. Though the holiday was still informally celebrated, it was only officially reinstated in 1989. This complex past makes it difficult to pinpoint the history of Seollal celebrations in the United States.

Focusing exclusively on the ancient roots of Lunar New Year can erase the current history of how celebrations have evolved across the world. After all, the holiday is celebrated worldwide today, including in Thailand, Malaysia, Singapore, Australia, Canada, Suriname and countless other nations, each featuring foods, events, and other customs unique to locals.

In the U.S., the Lunar New Year is popularly recognized and celebrated. California officially recognizes the holiday, with efforts underway to federally recognize it. The San Francisco Chinese New Year Parade is the largest of its type outside of Asia; Organizations across the country have planned events for Tết, Losar, Seollal, alongside Lunar New Year Fairs. And importantly, this popularity also brings increasing recognition of the diverse communities that observe it: The term “Lunar New Year” has gained important significance as a way to recognize these frequently overlooked celebrations from non-Chinese communities.

Ultimately, Lunar New Year in the U.S. is multidimensional: a reflection of the experiences and struggles of Asian American communities, of a diaspora’s shifting relationship with their heritage, and, above all, a time for family, joy, relaxation, and reflection to welcome the new year.