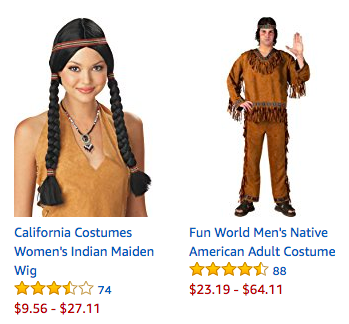 Posted at 20:13h in Arts and Culture, Commentary by RPadmin 0 Comments 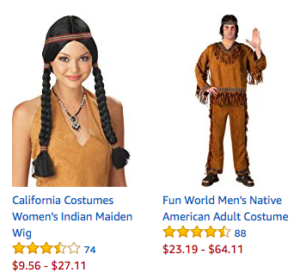 It all started in my kindergarten class when we were preparing to do a “Thanksgiving celebration” and our teacher had us dress up as pilgrims and Native Americans. I knew I was Native American, and was excited to “dress up like a Native” but was saddened when I was told to be a pilgrim. I didn’t know that this experience would still be a problem 18 years later.

A few years ago, I was at Universal Studios with my best friend for Halloween. As we headed back to the hotel, I noticed a woman dressed provocatively in her “Native American” pleather skimpy skirt and revealing crop top with painted chicken feathers.

My blood was boiling and I had to say something.

I told her how disrespected I felt as a Native American for her to misrepresent my culture in such a way.

Many times people think they are respecting or representing indigenous people when they purchase the outrageous costumes online. They are doing the exact opposite.

Halloween is normally my favorite holiday but over the years I’ve come to cringe when the day gets closer and closer. I dread having to think about non-natives or those who say, “It’s okay, my great grandmother was a Cherokee princess,” dehumanizing me and my culture as if it’s all fun and games. It’s not. It brings up depression, suicide, and historical trauma for a lot of us. 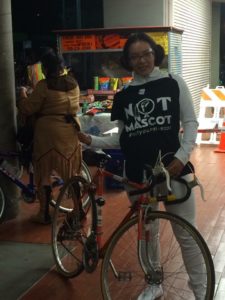 Hollywood has played a huge part in this. During the cowboys and Indians phase, they used Italian actors and actresses (yes, you read that correctly, Native people weren’t hired; Italians were dressed up to play the Indian). They would wear fake headdresses, leather clothing, put one hand up to say hello, and live in teepees. This is one of the biggest stereotypes that society cannot get over. Not every tribe uses headdresses, sleeps in teepees, or wears moccasins.

Native people were forced to adapt to western society because colonization “killed the Indian and saved the man.” This meant taking away our traditional ways, forcing us to live on and off reservations, instead of freely depending on the earth’s natural resources. Men’s hair was cut because they “looked like women.” In fact, our hair is sacred to us and we only cut our hair when a family member passes. They forced us to speak English at their religious boarding schools and beat us if we spoke our native languages.

I recently had an interesting conversation with a man who said he was West African and was interested in purchasing a headdress so he could dress up as a Native American for Halloween. He said he wanted to show respect to Native people by honoring them with the headdress.

I told him that a headdress is not just some hat that is thrown together with colorful chicken feathers, random designs and colorful beads. It has more meaning to it than just a decoration. Those who are chosen to wear a headdress are honored during a special war bonnet ceremony. Usually eagle feathers are used; only Native people who are enrolled tribal members are allowed to have eagle feathers. Each feather, bead, design is made with a purpose, is stitched and placed with love, in prayer and honor for those who deserve it for their leadership, life sacrifices, bravery and honor as Native American people.

The same goes for the clothing we wear during our tribal gatherings like powwows and sacred ceremonial sweat lodges.

After I was almost in tears explaining to this innocent man who knew nothing about Native culture, he apologized for his ignorance and asked for my forgiveness.

This is a continuous battle, not only for Native people, but for all groups that encounter stereotypes. Just look at the demoralizing princess, police or nurse costumes that women have to select from at Halloween stores.

This Halloween, please don’t support the exploitation of cultures or genders at any business. Dressing up like a Native American is racist and no, you are not honoring us.