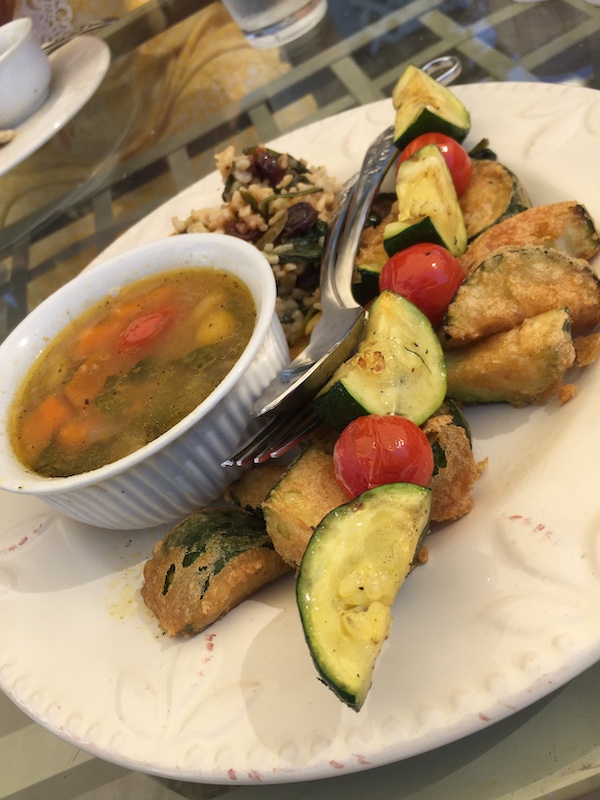 10 Apr On Being the Vegan at the BBQ

Posted at 22:30h in Food, Health by RPadmin 0 Comments

First, he poured the black charcoal into the BBQ pit, spritzing lighter fluid over it before grabbing his match to burn a dollar bill, a symbolic gesture to show that money meant nothin’ to him. My cousin and I both watched the flame ignite.

I sat there on my bike, leaned up against the gate, listening to the fire grow. My cousin prepared the grill, a dozen chicken thighs, and his special sauce to glaze over them.

It didn’t matter that it was a holiday. If it’s hot out, that’s good enough reason to crowd around the sidewalk and wait for the curbside chefs to slowly cook delicacies for the whole block. These used to be my favorite times: BBQ chicken, mac and cheese, baked beans, and every other side to accompany some good ribs and a strawberry soda.

On this Easter Sunday, I just watched. My cousins said I had “hungry eyes.” They cracked funnies, saying if they knew I was coming over they would have thrown some carrots on the grill. Not that I even wanted anything, but they couldn’t resist the opportunity in finding out what I can and cannot eat.

One person offered me raw onions. Another suggested white Wonder bread with ketchup because it’s made out of tomatoes. Another suggestion was someone’s grass in the backyard. My brother said they saved some bushes on the side of the house just for me. The jokes kept coming.

This didn’t bother me at all. I smiled and told them I was cool.

They don’t understand what being vegan means. They just know I’m one of them. Growing up we never heard the term before, so it’s new to us all.

I made my transition beyond an animal-based diet two years ago. Enjoying all of the Southern foods and corner store meals as a young adult, I suddenly lost my taste for it.

I remember sitting in Mel’s Diner in Pinole one sunrise before heading to work. Breathing in all of the kitchens smell, I ordered my regular four large pancakes, two sausage patties and extra hash browns.

This was a busy day. Waiters walked passed me with big plates piled with fish and steak, smothered porkchops and dry cornbread that’s been sitting in this dusty plastic bin on the counter for about a week.

I watched married couples and small families come in and out as I chewed my mouthful of pancakes soaked in syrup. As my meal settled in my stomach, stuffed and under the itus, I sat there until I was able to move again. The food was good, but now I regret that I ate too much.

Glancng at the TV screens displaying sports highlights and a variety of commercials, I observe peoples body language. Making no judgements off their appearance or what they were eating, I mainly thought about how their meals made them feel afterwards. If they felt as guilty as I for our indulgence. The health problems we may have later. Or now.

Honestly, most patrons in Mel’s looked like they eat big greasy plates with mountains of desserts quite often. One question came to mind: if some foods causes cancer, diabetes and other organ decay and failures, what foods do our bodies need?

At that moment, my perspective on eating changed. Instead of looking at food as a way to socialize or celebrate the usual birthdays and temptations to feed our cravings, imagine if we viewed food as medicine? With each bite, the body could heal.

Overnight, I decided I was going to I look for foods that will cleanse me from my Aunt Jemima-slave cookings. I wanted to learn what foods grow naturally and how to plant them myself. It wasn’t hard leaving chicken, fish and beef alone, but them chocolate chip cookies… that was my struggle!

One meal at a time, I thought about food I enjoyed eating and if there was a plant-based recipe I could use as a replacement.

I found a recipe for pancakes. For basic ingredients, I saw that I don’t need milk, butter or eggs to make pancakes. I can blend organic walnuts with spring water, add agave syrup as a sweetener, and strain the fluid into a jar. I created my own milk to stir with the flour. Depending on the amount of water used, I can also make a creamy butter texture to enhance the flavor.

Since then, I’ve been making my own burgers out of garbanzo beans and mushrooms, homemade cheese for my pizza, sauce for my stir-fried rice, chili, tacos, burritos. You name it and I can find — or already have found — a way to make it ten times better.

My family often makes fun of me for my food choices. Some think that I’m being brainwashed by white people. But what they may not understand is that our ancestors, who were indigenous to the Americas or brought over from Africa, were farmers. Before slavery and after, our great grandparents knew our connection to the Earth.

That’s what made them strong and grounded. When farming, you pay closer attention the to four cycles of the year for planting and harvesting your crops. You become one with nature when you work with it. If you know the field, you can control your livelihood.

We lost that during the fast-food era.

Getting back to the Earth has brought me more joy and a deeper connection to life’s cycles and how our bodies are all apart of one being.

I chose life and I’m living.