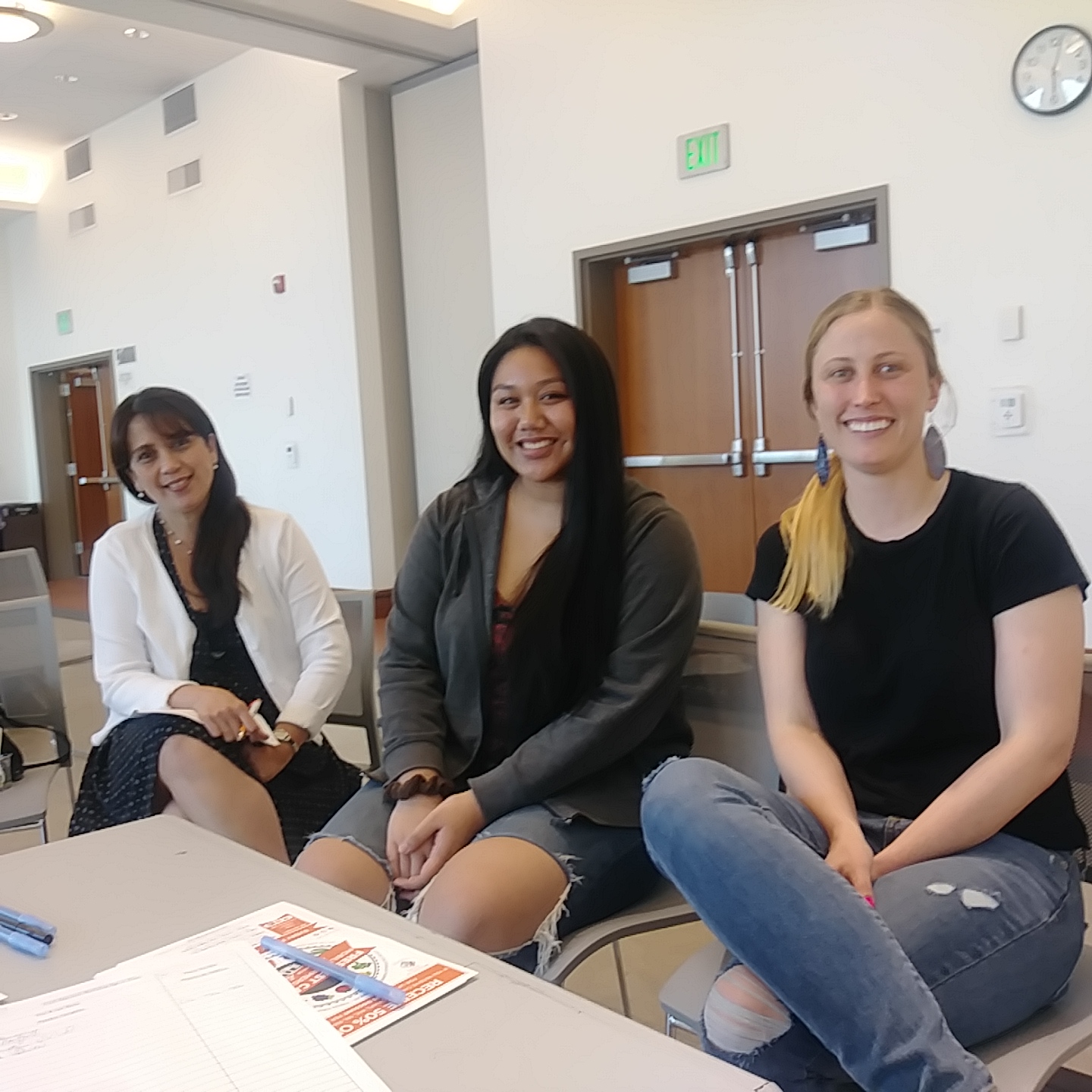 28 Aug How I Learned What’s Wrong With My Food

Posted at 04:02h in Education, Food, Health by RPadmin 0 Comments 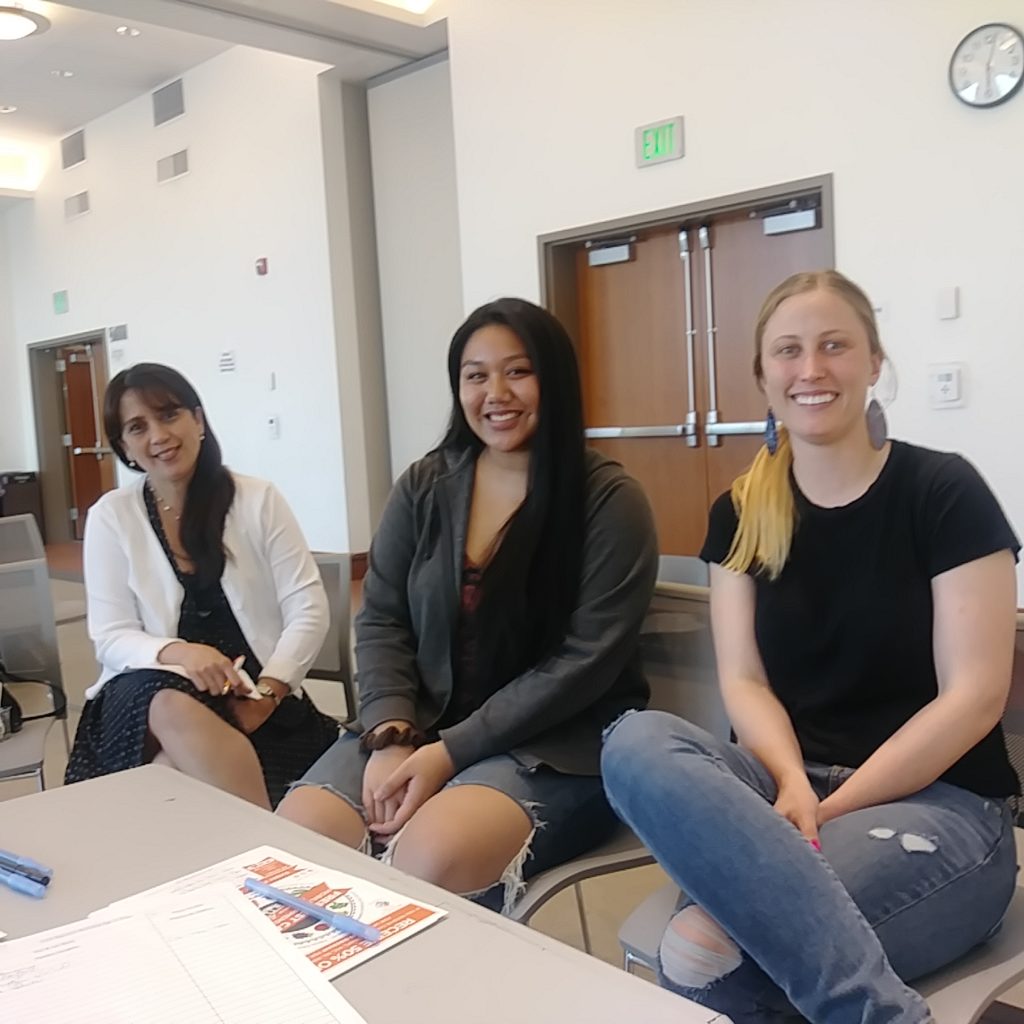 Above: Patricia Ronqillo, Maggie Ronquillo and Sierra Silva, at a recent Veggie Rx class at the San Pablo Community Center.

Sierra Silva is on a mission, and it’s one that as a girl she couldn’t have imagined. She is working to empower people to better their lives by bettering their health.

“I grew up eating all processed foods,” Silva said. “The older I got, the more I realized that a lot of it may be the cause of mood swings, tiredness, etc. It may come from what I have been putting in my body.”

Silva grew up in Garden Grove in Southern California, in a community similar to Richmond and San Pablo, where healthy food was scarce and junk food abundant. Later, she earned a degree in Health Sciences with an emphasis on community health.

“I thought I’d go into physical therapy or kinesiology,” Silva said. “But when I learned about the systemic issues happening within our communities, I was moved to do my part. Food access seemed like a great way to get involved.”

Now, she teaches nutrition and cooking classes through non-profit Fresh Approach. Her classes are part of Veggie Rx, a nutrition education program for low-income families that teaches the basics of healthy eating in eight, free classes over two months.

On Aug. 15, I attended one of the last classes in the series at the San Pablo Community Center. It focused on sugar, salt and processed and unprocessed foods. It was an eye-opener and left understanding so much more about what I eat and how it affects me.

Eating unhealthy foods, Silva says, can put people at a disadvantage, so she advocates for people to have a better understanding of, and more access to, foods that work for, and not against, the body.

“I have always been passionate about food and its ability to create community and transcend boundaries,” she said. “Despite our differences everyone wants the same opportunities for themselves and their family members. And I believe health and nutrition makes it possible.”

Patricia Ronqillo also attended one of the classes and said she found it so informative that she kept coming back. She said it’s helped her in many ways, including informing her decisions when grocery shopping.

“I learn a lot of things,” Ronqillo said. “I was surprised at the sugar levels and some of things I learned today.”

It was a surprise to me too to learn how prevalent sugar is our diets and how much of the American diet involves processed foods.

Thanks to the class I realized how detrimental some of my choices are to my own body. That knowledge is empowering and for Silva, it’s the main point of the classes.

“I think our classes make nutrition and health accessible and understandable,” she said. “We aren’t preaching a diet, we are just trying to get people to eat more fruits and vegetables. I think that’s the biggest takeaway for our participants.

For those that want a taste of the class, here are my notes:

Unprocessed foods are basically fresh or raw ingredients eaten in their unaltered animal or plant sources. It’s anything not made in a factory that comes in its own wrapper. Good examples include raw fruit, vegetables and nuts.

Minimally processed foods are those that change little from their sources, like bread or peanut butter.

Highly processed foods include packaged food and cured deli meats. They are prepared quickly and lose nutrients as they make their way onto our plates. They often contain chemical preservatives to extend their shelf life.

The two most common culprits in processed foods are sugars and salt. They appear in foods by numerous names — sucrose, dextrose, sodium, sodium gluco-something, etc. — and you should avoid as many of them as possible.

Salt, however, is tricky. It helps balance fluids in our bodies and is thus necessary but if we consume more than we expel, it builds up in our blood, forcing our hearts to work harder, which can lead to heart disease, strokes, kidney diseases and, of course, heart failure.

Ways to cut down on sugar and salt:

To avoid getting sucked into fake healthy eating jargon the Veggie Rx class educated us on common food labeling buzzwords that don’t mean anything.

“All natural” is meaningless; the government doesn’t even regulate its use.

I thought sugar would be easiest to avoid, but then I learned it comes in many forms because it’s been chemically altered to taste sweeter than sugar. Research shows that a sweet taste triggers the brain to want more, so the processed food industry exploits this weakness like drug dealers.

To combat these tactics, the Veggie Rx class advised to try the following:

If you want to know more, check out the Veggie Rx calendar for upcoming classes.