15 Nov Shields-Reid Gets a Shot at a New Life

Posted at 20:10h in Neighborhoods, Sports by RPadmin 0 Comments 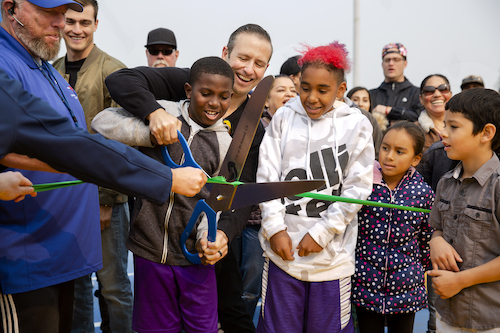 The sports court is awash in bright blue and gold, a pallet that not only matches the Golden State Warriors but also pays homage to the court’s original paint job.

In its heyday, the courts at Shields-Reid park was the training grounds for would-be basketball greats, including former NBA player and coach Paul Silas and Richmond legend Clyde Hardeman.

Over the years, disinvestment and a lack of city funds sent the park into terrible disrepair. The basketball courts quickly began to resemble badly pot-holed roads.

Not just five years ago, armed guards stood watch over the park due to the high level of crime occurring in and around the park.

“It was in disrepair and bad things were happening,” Troy Porter, recreation supervisor and Shields-Reid Center manager, said.

That was until it was picked among many other projects to be given some long overdue maintenance. After having closed off the sports courts for the repairs to be done, the courts were finally reopened last month for the local kids to test out.

Porter watched as the kids ran out on to the courts, allowing the next generation of Richmond athletes to have a place to call home.

“It brought joy to my heart,” he said.

Thanks to the support of Mark Mahoney — a retired member of the Plumbers and Steamfitters Local 342 Union — the once-celebrated basketball courts have new life again.

Mahoney and current leadership of Local 342 approached Contra Costa County Supervisor John Gioia’s office looking for a local community service project to take on. After looking over a long list of possibilities, Mahoney decided — based on available funding and time — that Shields-Reid was the exact project Local 342 was looking for. After picking out the project, Mahoney’s next step was to get the rest of the local unions on board.

“It was really easy,” he said. “When I went to the building trades, everybody was so happy to help. It was not a problem at all.”

With close to 30 union members volunteering their time, the project was completed in just two weeks. Along with donated time and labor by union workers, Fregosi & Co. Paints Inc. donated $6,000 worth of paint. The total cost of the project, including donated labor and materials, was over $13,000.

During the ribbon-cutting ceremony, James Boster with the International Union of Painters and Allied Trades District Council 16 said unions are known for giving back to their neighborhoods.

“I encourage other unions to do this,” he said. “It’s for the kids.”

He was, essentially, preaching to the choir as nearly 150 North Richmond residents, labor union contractors and city officials came together to celebrate the official re-opening of the newly renovated Shields-Reid Community Center outdoor play area.

In his remarks to the crowd Dr. Henry Clark reminisced over his time on the courts as a youth and the twilight basketball leagues that took place there in the summer. The leagues helped young athletes get an idea of what to expect during the coming high school basketball season.

Robert Rogers, district coordinator with Gioia’s office, said the kids who play on those courts are “resilient.”

“They’re beautiful. They’re buoyant,” he said. “They’re not gonna be stopped, but they were playing in a pretty tough playground.”

And the neighborhood youth around the Shields-Reid Community Center are in love with their new sports court, which now includes four square, hopscotch and a small soccer area.

After the ribbon was cut, several children immediately took to the basketball courts to shoot hoops. One of them was 12-year-old Christian Lee, who lives in the neighborhood near the park.

Lee looks forward to coming to the courts throughout the week to practice his dunks on the shorter hoops. He also says he likes the new backboards and rims and the new paint job.

“It gives a little more color to the community,” he said. 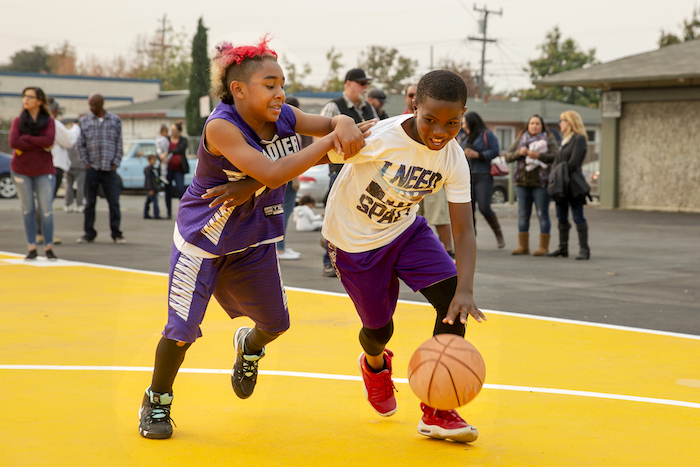