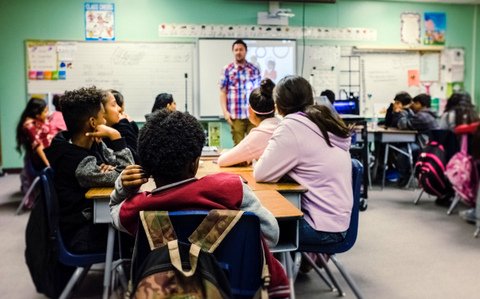 06 Nov The Great Gender Debate: Who Has It Better?

Posted at 18:55h in Youth by Pulse Editor 0 Comments

EDITOR’S NOTE: Richmond Pulse asked students at Kennedy High School about whether they believe boys or girls have it easier in modern society. These are their answers, which have been edited for clarity and length.

“Boys have it easier than girls because girls go through more changes. Men don’t have to deal with female body problems and men have overall been viewed as superior over the centuries. Women aren’t taken seriously and don’t get the same respect. Women’s pants don’t even have real pockets.” -Misty Sanchez, 17

“Both genders have it hard. Boys get bashed for showing emotion and femininity because of what society calls ‘normal for a man.’ Men usually have to be so tall and macho in order to be more appealing to the opposite sex. In media, most women are sexualized to sell the product or grab attention.” – ReyZarria McMillon, 17

“I think boys have it easier than girls. There are a lot of things that both guys and girls do, but only the girls get criticized for it. Girls are told that they can’t do certain things that guys do, such as working in construction. I feel like people sometimes look at girls as being weak or not as capable as guys.” – Johnshalia West, 17

“When it comes to divorce, the mother is more likely to get the kids. When it comes to work, men usually get higher pay and a better chance of being promoted. It’s hard to say when it comes to relationships. Men are expected to make the first move and to pay for most things, while women have to deal with abusive partners and toxic relationships. It’s neither hard nor easy for either gender.” – Angel Andrade, 16

“I think that it’s vice versa as the times have changed and we work towards equality. Men are described as being strong and supporting the family, but women do that, too. Women are always said to be responsible for cooking and cleaning, but that is also not true, as men can do all of that as well.” – Lizandro Alvarado, 17

“I think boys have it easier than girls because they don’t have to go through the same struggles. They don’t have to watch their back to see if someone is staring at them or deal with discrimination at work. Society views boys as superior, so girls are judged more. In pregnancy, girls hold a live baby in their body for nine months, and then deal with the excruciating pain of childbirth.” – Andres Ray, 17

“I think boys have it easier than girls, due to an established patriarchy. Boys can do many things without being judged or bothered, while girls have a harder time if they do the same activities. There are definite double-standards that prohibit women from living how they choose. Men harass girls on a daily basis, which must be very annoying and unpleasant. Boys don’t have to deal with periods, cramps or childbirth. Overall, girls have things harder for them due to variety of factors.”

“I think that boys have it easier than girls in some ways. In the workplace, if they are demanding, they’re seen as being assertive where a girl would be considered bossy. Boys can also get away with immature behavior, and it is just chalked up to ‘boys will be boys.’ In sports, boys are expected to be good, but if a girl is good at sports, she is told she is ‘good for a girl.’” – Mariana Taylor, 17

“I believe that each gender has a different type of hardship, as our society is not constructed around equality. Boys may find it easier to do physical work for a longer period of time, while girls can have it easier in getting things done their way. I don’t believe one gender has an advantage over another. There’s always a balance.” – Carlos Munoz, 18

“I believe both genders have it the same way, through different activities or ways of behaving or been treated. In a certain way, girls may have it easier because they’re told that is okay to be sensitive and such. Boys sometimes do have it easier in some situations, like not being harassed or having as much responsibility.” – Nohelia Montes, 17

“Coming from a Mexican family, I see boys having it easier than girls. In Mexican households, boys get to relax and slack off, but girls are told to clean up and do chores. Boys can just leave and hang out with friends, but girls can’t.” – Brittany Gonzalez, 17

“Everyone has their own talents and skills to solve situations that others can’t. If we were going for stereotypes, boys are athletic, strong, masculine, and never cry. Girls are smart, emotional, and quick-witted. Even though these stereotypes aren’t true, just imagine if they were. I don’t dislike this.” – Randle (Seth) Wasson, 18

“As a girl myself, I definitely think that boys have it way easier than girls because of sexual assault and harassment, having rights and being respected. It’s common in certain settings typically dominated by men (high-level business positions, for example) for women not to be taken seriously. Women and girls are attacked and targeted for doing whatever they choose to do. They are branded as nagging, talkative, over-emotional, and all other types of things that shape people’s negative views about women. Women and girls even look down on each other and perceive each other negatively.” – Asia Butts, 17

“I think people have their own daily struggles, but women actually go through a lot more than guys. They sometimes get bashed for the dumbest things, like what they wear. It’s really difficult to be a female and I respect each and every person.”