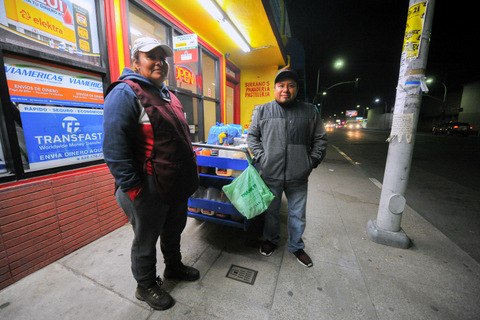 Despite the fear of the coronavirus entering their everyday lives, Salvador Avila and Elizabeth Morales see no other choice but to continue selling shaved-ice drinks, street corn, and other Mexican delicacies throughout Richmond.

Since immigrating to the U.S. from Puebla, Mexico, in 2003, the couple has built their lives around street commerce. To find another source of income, for Avila, would be to “start from zero.”

“This is how we have maintained our family,” Avila said.

For 15 years, Avila, 33, and Morales, 42, have walked the streets of Richmond as eloteros, or people who sell corn.

With carts full of food and good energy, they have served up treats in local neighborhoods.

“We are happy that we have been able to do this job as a team and in family,” Morales said.

But as the coronavirus began to spread and Contra Costa and other Bay Area counties were placed under a shelter-in-place order, Avila and Morales saw fewer sales and lost revenue as their perishable goods started to go bad.

“We don’t have another source of income, and because we are undocumented, the government will not help us with anything,” Morales said.

On March 27, President Trump signed into law the largest stimulus economic package in history, the Coronavirus Aid, Relief, and Economic Security (CARES) Act, to inject $2.2 trillion into the U.S. economy.

Among other things, the act will provide one-time payments of around $1,200 to most adults in the U.S. To be eligible, a person must be a U.S. resident with a work-eligible Social Security number, not exceed certain income levels, or be a dependent on someone else’s tax return. The Washington Post has a free calculator to determine the exact amount you would be eligible for.

Because of their immigration status, Avila and Morales will not see any economic relief. And with a teenage daughter and a newborn girl at home, they are up against the wall — it’s either risking their health or their livelihood.

“We are scared (of the coronavirus), but necessity drives us to be out here,” Morales said.

Avila and Morales are not alone. There are an estimated 2.2 million unauthorized immigrants in California, according to data from the Pew Research Center, which also shows that they make up 8.6% of California’s labor force.

That means millions of workers will have no economic help through the CARES Act and will be forced to continue working or suffer without income.

In the meantime, Avila and his wife only go out three times a week. When they do go out, they sell for an hour or two at most. On a normal week, they would work every day starting in the afternoon till night, with Sundays being the best day for business.

“Our profits are down by half right now,” Avila said.

The streets are empty and more people stay inside their homes. Avila doesn’t blame them. If he could stay inside, he would.

“I always think about being infected, but I always have faith and pray that God will take me back home safe,” he said.

Still, his worst fear is that his household will become sick because of him.

“But, ultimately, I need to work. This is how we pay for rent and bills,” Avila said. 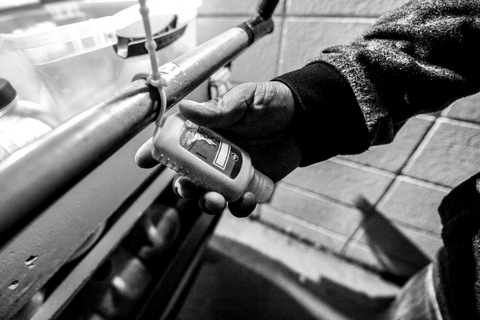 Neighbors that have bought from Avila for years understand his predicament. They have asked him to stay safe, even if he has to continue working.

“The neighbors tell me to be careful. One lady even gifted me gloves, masks, and hand sanitizer,” he said.

The close relationship Avila and Morales have fostered with their patrons keeps them joyful about doing their job in these uncertain times.

“Some kids I have known since 15 years ago are grown. They are now working, some are in college, and some have moved out of Richmond,” Avila said. “It feels really special to have this relationship with the community.”

But there is no denying that there is sadness in the streets.

Morales, who walks 23rd Street, could see the emotions of the few other people who were also walking down the street.

“I can see it in their faces that they are scared to get close to us or others,” she said.

As their night ended, Avila enters a 23rd street bakery to buy pan dulce, or sweetbread, for later. He then rolls his wife’s cart to their van. They go to pick up their youngest daughter from a family friend’s house.

And that night, after an honest day of work, there was serenity.

“Once we are home, it is a happy feeling,” Avila said. “I am glad that I can see and be with my daughters and know we are okay.” 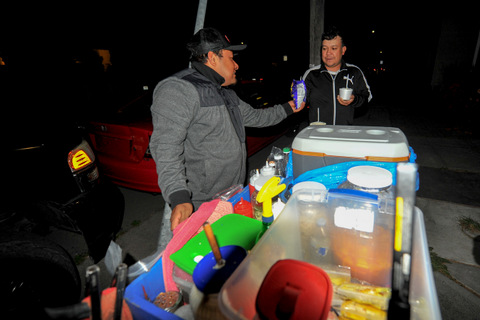