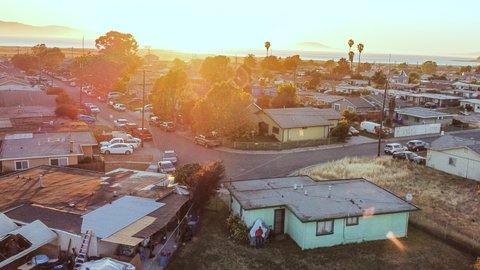 Many Richmond residents may be especially vulnerable to COVID-19.

An analysis of coronavirus-related deaths in 40 states and Washington D.C. by APM Research Lab suggests that nationally African Americans have died at a rate more than two times higher than that of white, Asian and Latino Americans. The data illustrates glaring health inequities for African Americans.

And African Americans make up 20% of the population in Richmond, a city with one of the highest asthma rates in California.

“I am not really supposed to be out and about because my lungs are affected,” said 45-year-old Kedra Gordon, an African American and lifelong resident of Richmond. “I have to be careful with that because I don’t want to get sick. We’re at more high risk than most people because of our immune systems.”

Gordon has had respiratory issues ever since she was young living in Central Richmond. But it was in her early 30s that she was diagnosed with sarcoidosis, an inflammatory disease that primarily affects the lungs. She fears what the coronavirus could do to her already compromised immune system should she contract COVID-19.

“Being an African American woman, it doesn’t feel like we exist anymore,” Gordon says. “Because I’m an African American person, sometimes things are not available for me like they would be for someone else that was from a different background. For testing, for any illness that we are pretty much dealing with, not just COVID-19.”

Janet Johnson of the Sunflower Alliance says that Richmond has the highest number of COVID-19 cases in Contra Costa County — even though Concord and Antioch have larger populations. The Sunflower Alliance and Communities for a Better Environment are continuing their efforts to improve air quality during the pandemic, shifting their activism to online platforms.

Areas near the railroad and near Richmond’s major highways have seen a drop in pollution as a result of the decreased automobile traffic linked to the shelter-in-place order. But amounts of ground-level ozone, a pollutant tied to breathing problems and lung irritation especially among people with respiratory conditions, have increased as some industries continue to operate.

“Some of the most health-harming air pollutants include nitrogen dioxide, fine particulate matter and ozone, all of which can cause respiratory and cardiovascular illness and other health problems,” said Boris Lukanov, a senior scientist at PSE. “Chronic exposure to air pollution is also linked to race and poverty, and new evidence suggests higher COVID-19 mortality rates among African Americans.”

COVID-19 has many Richmond residents particularly worried because the virus often targets lungs that may have already been weakened by air pollution.

A study conducted by Harvard University’s School of Public Health links COVID-19 death risk with long-term exposure to air pollution. The study found that U.S. counties with higher air pollution levels in the last 15-17 years have a significantly higher number of COVID-19 deaths.

“I lived very close growing up to Chevron,” Gordon said. “I’ve heard [refinery explosions]; my whole house shook. It happened several times, and you can hear the alarm going off and you have to shelter in place. That’s happened so many times, we Richmond residents probably can’t even count.”

Since the current Contra Costa County health department shelter-in-place orders went into effect, air quality monitors have shown an improvement. Pollution levels are expected to go back, however, when commuters go back to work and shuttered industrial sites reopen.

“We are dealing with century-long social and economic forces that have created the injustices that we see today,” Soto said. “COVID-19 is not only once again an expression of that, but it is also disproportionally impacting those already suffering because of the structural injustices.”

Air pollution throughout the nation has decreased amid shelter-in-place orders. But because the federal government has rolled back environmental regulations on automobile pollution and polluting facilities, public health may be jeopardized in the future.

Johnson of Sunflower Alliance says there will be a new steering committee formed soon to discuss how to encourage continued reductions in air pollution in the area.

People interested in joining the committee should email action@sunfloweralliance.org. People don’t have to have prior knowledge of air quality monitoring.

“They should not feel intimidated because of lack of knowledge, because you can learn as fast as you want and there’s plenty to learn. There’s always opportunities for leadership, and that’s where people can actually begin to make an incremental change,” said Soto.

Richmond’s Gordon strongly believes that activism — fighting for healthy air and better health care — is the way to go.

“If you go out and fight for it, then it will be a better quality of life for our new generation. They wouldn’t have to deal with all the things we are dealing with,” Gordon said. “If we don’t do anything about it it’s going to continuously get worse.”