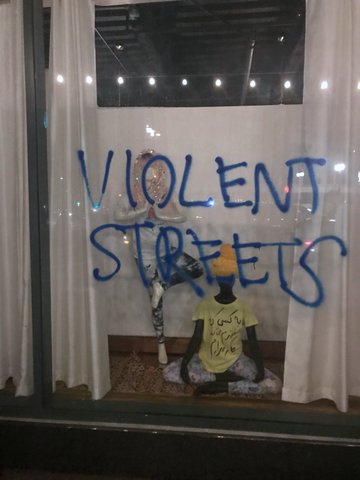 04 Jun My Business was Looted. I Still Support the Protests.

During the looting of downtown Oakland on May 29, my new yoga and retail business was broken into by seven white men with hammers, bikes, and radios.

They were organized, and they stole equipment and merchandise from me and caused thousands of dollars worth of theft and damage. Aside from the money or insurance claims or damage, it sets back the work I’m doing to create the jobs and positions for Black people, people of color, and women I’m trying to support and build up. It takes time and money away from actual progress and headway we were making to repair and recoup.

It was a humiliating, violating, and emotional assault. But many people have said I’ll be okay because I have insurance and it’s worth it for the revolution, because, as a business owner, I’m lucky and can afford it. “If damage to your shop means people will be free, then you just have to take that loss for the people and the revolution,” they said.

As an immigrant who has seen destruction in my home country in the Middle East, I don’t find the fires and explosions exciting, and from experience, I can say that violence is certainly not the measure of progress. It’s sad for the people, like me, who actually have to live and work there.

If the purpose of the agitators causing violence in our community was really trying to provoke revolution, justice, and wealth distribution, then what was the strategy behind destroying Black communities of Oakland that were already vulnerable? Why not be Robin Hood and loot Piedmont or the opulent neighborhood of Pacific Heights in San Francisco? If Black lives matter, where is the justice in vandalizing a Black neighborhood?

In my home country, entire city blocks full of people explode when hit by missiles. Men in fatigues hunt us for sport and post their kills on Facebook. White supremacist colonizers come into our countries with the intention of disrupting and derailing all of our systems.

As a result, we often cannot stay in our own countries because they have been thrown into chaos as the first step to colonize us. As immigrants, we have had to give up our cultures and way of life and move to other countries like the United States to survive.

This was the story of my family. My uncle and other family members were killed in the street by missile attacks. During the chaos of war, my father was imprisoned by an authoritarian Iranian government. The American government disrupted our political systems, and the political systems of all our neighbors, and all hell broke loose in the entire region.

I came to this country unwelcome, the child of Muslim immigrants. I’m not Black and I’m not white, but my family and life was deeply impacted and crippled by white supremacy. That continues today.

I share this information not to deflect and play trauma Olympics in relation to what is happening now in the Black Lives Matter movement, but to relate and say I have some understanding of what it means to feel enraged and terrorized by white supremacy — when all you are doing is trying to exist.

I’m also sharing my background to bring context to the parallels I see between the orchestrated destruction of the Middle East by white supremacists and the level of destruction and chaos I am seeing today in Oakland. It appears the U.S. government is starting to use the same tactics they use to subjugate people in the Middle East and other parts of the world on its own people, particularly Black citizens.

People on social media rejoiced when large chains like Target, Walgreens, and Walmart were being chased out of Oakland and the East Bay. But when the adrenaline slowed down, the smoke cleared, and reality set in, we saw videos of group of white agitators taking out all the pharmacies where sick and elderly people get their medicine. The agitators took out all the banks where everyday working people withdraw and deposit cash. And those same Targets and Walmarts that are refusing to open again? Those were some of the only places in these already parched food deserts where those with low income actually had access to food.

We are all processing the trauma. This is not just a Black issue, though Black people have made headway in the United States by mobilizing us to do something about this. The protests across the country showed us just how many people want and need change.

Violence against Black people affects us all. We don’t have to have Black skin to feel the rage and pain of a wrongful killing. I feel it in my body, in my mind, and in my soul. I don’t see this killing as a “Black” issue, I see it as if one of my own was wrongfully killed, and I too want justice and change.

Growing up in the United States, I have experienced all different kinds of cultures. The Black community is one of the most active and vibrant cultures to which an immigrant can be exposed. In the Bay Area, exposure to Black culture is the closest I’ve ever come to the experience of growing up in my home country.

I was not given the chance to have contemporary role models and culture from my own country, but I was able to look to Black elders, friends, and artists, because of where I was raised. Through proximity to the Black community, I learned that persistence, endurance, and joy are more infectious, powerful and healing than the virus of white supremacy.

I wish everyone in my country could experience the strength of the Black community in America, to learn from them, help them, and help protect their lives.