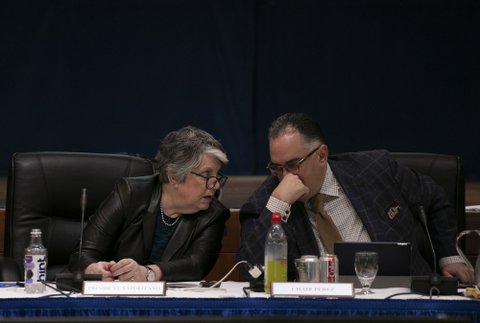 Then-President of the University of California system Janet Napolitano and John A. Perez, chair of the UC Board of Regents, at a meeting in January. (Anne Wernikoff / CalMatters)

The University of California will sue the federal government over new visa guidelines that would force international students to leave the United States if they are enrolled in a college or academic program that only offers courses online, university officials said Wednesday. California’s international students had reacted with confusion and dismay after Immigrations and Customs Enforcement announced the policy change in a press release Monday, and professors were already scrambling to provide them with more options for in-person study.

“The University of California’s legacy and leadership would not be the same without the international students and faculty who have come to this institution,” said UC Board of Regents Chair John A. Pérez in announcing the suit. “To UC’s international students, I say: ‘We support you and regret the additional chaos ICE’s action has caused.’ ”

More than 160,000 international students attend California colleges and universities, according to NAFSA, an association of international educators — including about 40,000 at UC. The new rules would affect students on F-1 academic visas and M-1 vocational education visas. As colleges affected by the coronavirus pandemic plan for a fall semester that will rely heavily on online learning, international students currently in the U.S. would likely be faced with a few unpleasant options: attend class in-person and run the risk of contracting COVID-19, transfer at the last minute to another university, or undertake a costly journey back to their home countries.

Students returning from their home countries will be barred from reentering the U.S. if they are scheduled to take only online classes, ICE has said.

UC Davis senior Kymberley Chu, who is Malaysian and studying international relations and anthropology, called putting students in that position malicious and inhumane. “It’s just saying, ‘I’m gonna kick out all these foreigners, despite the fact that they have ties and relationships, people, places and the things we’re doing,’” Chu said. “We already have lives here.”

An ICE spokesperson declined to comment on the policy change, but Acting Deputy Secretary of Homeland Security Ken Cuccinelli told CNN that it would “encourage schools to reopen” their campuses in the fall and that the department was being flexible by allowing students to take some online classes.

“We’re communicating with the schools and most of them are going to a hybrid model — some online, some in person,” Cuccinelli said. “If a school isn’t going to open or they’re going to be 100 percent online, then we wouldn’t expect people to be here for that.”

Yet even at universities like UC that are planning a mix of in-person and online classes for fall, the guidelines seems to imply that individual students would have to certify they are not taking a fully online course schedule. It’s a reversal of visa rules implemented in March that allowed international students to take all online classes during the spring and summer as universities converted to remote instruction.

Advocates for international students quickly condemned the new rules, while immigration experts said it was difficult to parse their meaning because the details have not yet been published in the federal register.

“The devil is in the details, which we only have partially because we’re literally trying to explain a law from a press release,” said Shoba Sivaprasad Wadhia, a professor at Penn State Law and board member of the American Immigration Council. For example, she said it was unclear whether a student enrolled in just one hybrid class combining online and in-person instruction could take the rest of their course load online.

UC’s lawsuit will argue that ICE failed to follow the federal Administrative Procedure Act when it introduced the new policy, a statement from the university said. Pérez said the university was also looking at ways to provide more in-person educational opportunities for international students. It’s not the first time UC has sued the federal government over immigration policy: The university won a major court victory last month when the Supreme Court struck down the Trump administration’s attempt to end the Deferred Action for Childhood Arrivals program, or DACA.

Often first-generation college students, international students can pay up to $65,000 per year to attend the University of California or $79,000 to attend the University of Southern California, among the top destinations nationwide for students from foreign countries. They do not have the same access to federal financial aid that U.S. residents do.

Rachel Banks, senior director of public policy at NAFSA, said the new policy sends the wrong message to those students as the United States competes globally for academic talent with countries including the United Kingdom, New Zealand, Canada and Australia.

“While we’re struggling with this current administration in terms of our message, the rest of the world is sort of waiting for us to figure it out,” Banks said. “They’re out there saying, ‘The United States doesn’t want you, we do.’ ”

International students said they worried the new policy would force them to compromise their safety, whether by risking exposure to the virus or navigating a perilous return to their home countries.

Peter, a UC Santa Barbara student from China, said that with the campus offering a limited number of in-person classes for fall, he has no idea whether he’ll be able to find one. He asked to be identified by his first name only, due to fears that being interviewed would affect his visa status.

He had preferred to study online rather than in-person given the pandemic, but now wonders if that will be possible.

“Fully in-person courses are not acceptable because they’re really dangerous,” he said. “But if I am going to be fully online, I just need to buy a ticket as soon as possible and go back to China because there’s no other option,” he said.

Abel, a rising junior at UC Berkeley who also asked for his last name to be withheld to avoid retaliation in his home country, said he was still unsure exactly how much in-person instruction is required to keep his visa current. He came to the United States from Armenia at 16, he said, in part to avoid serving in the country’s military.

“I’ve followed every legal rule of the nation. I’ve paid my taxes, I’ve done everything on time. I followed the COVID-19 regulations of staying in the house, or whenever you leave, you should wear a mask,” he said. Suddenly hearing about the new visa policy, he said, “just induced so much stress.”

He’s concerned, he said, that if he returns to Armenia now he won’t be able to leave again.

Harvard and MIT became the first universities to take legal action against ICE over the regulations Wednesday, filling a joint suit, and some UC students had urged the university to do the same.

The new visa rules could also affect 11,000 students at California State University, according to spokesperson Toni Molle, and more than 21,000 at the state’s community colleges — both of which plan to conduct classes largely online in the fall.

Even before the announcement of the suit, students and faculty were creating ways to help international students add in-person courses. Sumana Kaluvai, a 2019 UCLA graduate, created a Google spreadsheet to match international students looking for spots in in-person classes with U.S. residents who are willing to give away their space. The spreadsheet began just for the University of California, but within a day, she said, millions had viewed it and more than 50 schools across the nation are now represented.

“I didn’t know a single person who saw this coming. I think that’s why the reaction has been so crazy,” she said.

“After a certain point, it becomes difficult to rely on institutions and organizations to respond and help you out. So I think it’s important for students to have a tool for them to help themselves and make their own voices heard.”

Morteza Dehghani, a USC professor of psychology and computer science, posted a tweet along with other USC professors telling international students to email him for help arranging in-person instruction in the fall.

“I’ve received hundreds of emails since the tweet. Some of the emails are very emotional, you can feel that the students need support,” he said. “They’re scared, a lot of them are under financial pressure. They’ve already paid for their housing. A lot of them can’t afford to pay for another round-trip airline ticket, especially in these circumstances.”

“At least in Southern California, we have this opinion that we thrive when we bring the world’s greatest minds to our shores. So not only will this ruling will directly push them away, but it also makes it less likely for other students to apply and come here,” he said.

Chu, the UC Davis student, is looking for a one-unit, in-person class that will allow her to meet the new guidelines. Not complying would mean going back home, which is particularly hard since her parents live in the United Arab Emirates but her visa there has expired. If she was forced to leave the U.S., she would have to either go to Malaysia or New Zealand, where she has citizenship, but would be separated from family.

“How do you define home? Home for me is more than one place,” Chu said. “Not all international students have the option of going back home.”

Rashad is an intern with the CalMatters College Journalism Network, a collaboration between CalMatters and student journalists around the state. Swartz is a contributor to the network. College Journalism Network intern Janelle Salanga and higher education reporter Mikhail Zinshteyn contributed reporting. This story and other higher education coverage are supported by the College Futures Foundation.