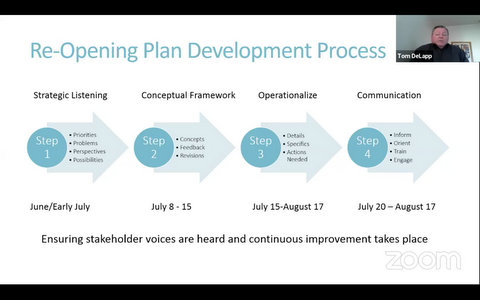 The framework revolves around supporting distance learning to address concerns about educational equity and isolation, among others, that arose after schools closed in March. When schooling restarts Aug. 17, in-person activity, at least initially, will be restricted to “student support hubs.” These hubs will admit students based on need to help them with wellness, academics, technology, language support, nutrition, special education and attendance.

Access to these hubs will be determined by tiers of priority, according to the framework. The first tier will include students in special education, homeless students, foster youth and those with high absenteeism. The second tier will expand the hubs to students with minimal engagement or mental health concerns, and the third tier will focus on families most in need of in-person learning support.

The framework, and the situation informing it, was presented at the town hall meeting by Tom DeLapp, president of Communication Resources for Schools. Superintendent Matthew Duffy said DeLapp and his organization had helped the district collect the data used to inform the creation of the framework.

DeLapp said the framework prioritizes safety, which he said was the main concern taken away from listening to the community. The plan also attempts to account for the extra pressures added by distance learning, such as detrimental effects to mental health caused by isolation.

“We clearly want schools to open, we need schools to be open, and we must do that safely for all of our students and employees,” DeLapp said. “Our goal is, really, safe schools and safe spaces.”

The question of how to return to school has been contentious. Because of learning loss, quarantine fatigue, inequities, a need to return to the workforce, and mental health concerns, among other reasons, a majority of parents and students want a return to in-classroom instruction, DeLapp said. But a majority of teachers and staff want to avoid health risks for themselves and students and, therefore, support a distance learning model — despite harboring concerns about learning loss.

The California Department of Education suggested districts reopen to the extent possible but has left specific decisions to the local districts, DeLapp said.

“Everybody’s pushed the decision right back down to the local school board and the local management teams at schools,” DeLapp said. “No one wants to take responsibility for making the call.”

Implementation of the program will include a Back to School Night orientation before instruction begins. The priority of this orientation will be to build relationships between parents, teachers, staff and students and assess student needs. Part of the orientation will also involve student engagement activities, groups to boost morale, and other attempts to establish a sense of school community.

Duffy said the district would fill in the specifics of the framework over the coming weeks. At the end of the town hall, Chief Technology Officer Tracey Logan sent out a poll for community members to share their concerns. As of the end of the poll Monday, the highest votes included: teachers having the tools and resources for remote teaching, access to safety materials, making sure there’s a clear plan when COVID-19 cases spike, and training for teachers.