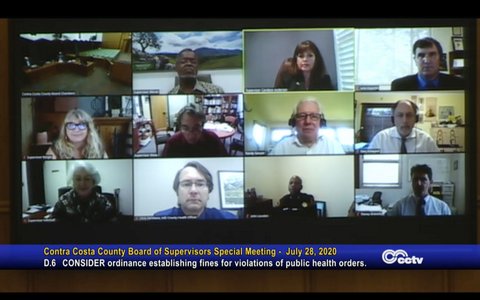 “If a higher percentage of individuals wore masks and businesses enforced it, we wouldn’t have the surge of numbers we’re having,” said Supervisor John Gioia at the Contra Costa County Board of Supervisors meeting Tuesday.

On Tuesday, the Contra Costa County Board of Supervisors unanimously approved an ordinance authorizing fines for violations of COVID-19 public health orders.

Fines may be applied to both businesses and individuals, according to the agenda item. The first non-commercial violation is subject to a fine of $100, the second is $200, and each subsequent one for a year from the first is $500. If a violation lasts longer than a day, each additional day counts as another violation, according to the item.

Fines for businesses are higher: $250 for the first violation, $500 for the second and $1,000 for subsequent violations. Fines can either be paid or appealed to a hearing officer appointed by the agency issuing the fine, according to the item.

Many public commenters said they believe the ordinance violates their constitutional rights and freedoms, and some said the fines will heighten financial and emotional distress for county residents. Other commenters said passing the ordinance will help the county cut down the rise in COVID-19 cases.

Supervisor John Gioia said he was shocked by the lack of literacy and scientific knowledge that people have. He said the goal of the board was the common good, to improve the health of all residents in the county, and that he was sad there were so many people who believe they can do what they want without thinking of others.

Gioia said he’d spoken to many people who want the freedom to have an Intensive Care Unit bed available to them in the case of an emergency, and this freedom will be threatened if cases continue to rise along the current trajectory.

Gioia compared the situation to arguments people once made about the freedom to smoke. He said he thought society had come around to realizing the freedom of other people to be free of secondhand smoke and health hazards.

The fines, Gioia said, were an extra opportunity for noncriminal enforcement. And the fines were needed to help cut down the spread of COVID-19.

“If a higher percentage of individuals wore masks and businesses enforced it, we wouldn’t have the surge of numbers we’re having,” Gioia said.

Gioia said he was concerned, however, about the ordinance being used to unfairly target the Latinx and Black communities. He said the county needed to remain aware of how the fines were being deployed.

The rest of the supervisors agreed with Gioia. Supervisor Karen Mitchoff said the county had tried not enforcing for months and all it had gotten was increased cases. She said she was tired of people giving bogus reasons about why they don’t want to wear a mask, and they weren’t being inconvenienced much.

“We’re not out to be the mask police,” Mitchoff said. “But we are out to get these numbers down.”

Supervisor Federal Glover said the supervisors had given an oath to serve and protect the community, so it was their job to make sure everyone was safe. Supervisor Diane Burgis said she didn’t like wearing a mask, like many of the commenters, but, even aside from the deaths, nobody knows the long-term health effects of COVID-19.

In other news, the board moved forward on sending a half-cent sales tax measure to voters. The vote was 4-1, with Supervisor Candace Anderson opposing. Anderson said she opposed the measure because she disagreed with adding a tax on county residents during a pandemic.

The board also voted to set up a special meeting for Aug. 21 to potentially cancel the ballot item, and thereby save the costs of printing it. This would be done if the county doesn’t receive confirmation from the governor’s office and the Legislature that Senate Bill 1349, which is required before the sales tax could become effective, will pass.

“I will not commit those funds unless the governor has actually said he will sign this bill,” Mitchoff said.