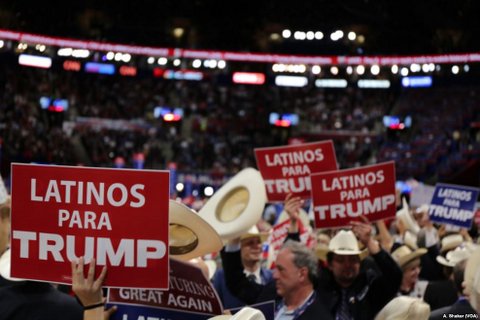 Posted at 14:57h in National, Politics by Danielle Parenteau-Decker 1 Comment

A scene from the 2016 Republican National Convention. (Voice of America via Wikimedia Commons)

As Election Day nears, both Democrats and Republicans are counting on the Latino vote, with the latter banking on many Latinos’ belief in “traditional values” and distrust of the far left and the news media.

Over the past twenty years, the reliance on the Latino vote has grown to a now record proportion. According to the Pew Research Center , there are in this year’s election and they’re concentrated in just five states: California, New York, Florida, Texas and New Jersey.

In 2016, President Trump won 29% of the Latino vote, according to a CNN exit poll, showing a fair amount of support within a demographic that has been targeted by the president’s rhetoric and immigration policies.

That figure may not tell the whole story, however. The research firm Latino Decisions has said it should be viewed with “extreme skepticism” because it is unknown whether the exit poll was conducted in Spanish, along with other issues with its methodology that could have skewed the results.

Nonetheless, politicians and political scientists are starting to recognize the diversity among the Latino voter demographic and that Latinos are not monolithic in their ideologies.

For 60-year-old Gil Lopez of San Pablo, his support for the president during this election year is grounded in what he calls “traditional values.”

“I would describe myself as Christian and that, for me, is the reason why I feel compelled to support Trump in the office of the president,” Lopez said. “I don’t agree with the lack of family values with the Democrats.”

Lopez, who came to the United States from Guatemala in the late 1980s and whose first language is Spanish, said that independently looking into facts online has helped him feel more secure in his support for Trump’s reelection.

“I don’t necessarily trust the [mainstream] media and the news,” he added. “I use my phone and the internet to gather what I feel is the most unbiased information.”

A lack of trust in the mainstream media has been a common theme for not only Latinos but the country as a whole. According to a Knight Foundation and Gallup poll, 79% of Americans say news organizations they distrust are trying to persuade people to adopt a certain viewpoint.

27-year-old Richmond resident Maria — who said she wouldn’t give her last name because “Trump supporters get a lot of [flak] from people, and it’s scary” — has also grown suspicious of the media. Around the start of the pandemic, she began doing her own digging, which influenced her to take a political side.

Maria said that now she is fully behind the president and that the media has stoked fears during the COVID-19 pandemic.

“I realized how much fear is put into the news. At the beginning of the pandemic, it was, ‘We’re all going to die,’ this and that,” she said, citing an example from the Spanish television channel Univision, which her mother regularly saw broadcasting construction workers burying bodies in New York City in the early days of the pandemic. “You think about the psychological effect it is having on us,” she continued.

Lopez approves of the president’s handling of the COVID-19 pandemic and considers the current situation an attempt to derail the 2020 election.

The pandemic has been one of the major issues that has struck a chord with Latino voters on both sides of the political spectrum.

According to a Pew Research Center  poll in March, 65% of U.S. Latinos said that they viewed the pandemic as a threat to the nation’s overall health, while 50% said that the current pandemic would have a direct affect on their personal financial situations. Another Pew poll from this month shows that Latinos have been hit especially hard financially during the pandemic.

Even with these numbers, many still question the legitimacy of the situation, arguing that policies such as shelter-in-place orders have been enacted with a political slant.

East County resident Mario, 53, who chose not to disclose his last name for privacy reasons, said California has become a political opponent of the president in a way that diminishes taking virus-related precautions seriously.

“I feel like it’s all for the election. It’s a political move that divides rather than unites,” Mario said. “I’ve lost work because of this virus and feel that if these restrictions would be lifted soon, we could get back to normal.”

Mario, who came to the United States from El Salvador in the early 2000s, said his experience in Central America is why he considers himself more conservative than liberal and why he supports Trump.

“I saw firsthand how a socialist radicalism can put a country into an uncontrollable mess,” he said in reference to El Salvador. “Where I’m from, that type of ideology is dangerous to the common person.”

Mario said he has been impressed with Trump’s tenure as president and that, although there has been opposition to his leadership, he has taken care of the country’s financial situation in the face of the global coronavirus outbreak.

“I feel like there was a lot of financial growth for the economy up until the coronavirus started,” Mario said. “I believe that economic fall since the early part of the year will be what is talked about heavily instead of all the success of the first three years.”

According to a study conducted by Council of the Americas after the 2016 election, Latino men were more likely to vote for Trump than Latinas were, by a rate of 33% to 26%.

Lopez and Mario both echoed sentiments in the media as of late in regards to Latinos who have come from countries where the concept of socialism is stigmatized.

Former chief of the U.S. Office of Citizenship Alfonso Aguilar, who served in President George W. Bush’s administration, wrote in an op-ed in Newsweek in July that many Latinos, including those who came from countries with “radical leftist regimes,” have been “warming up to Trump.”

“We come up north for the freedoms that we heard about and for the opportunities to raise families in a traditional way,” Lopez said about his motivation to come to the United States. “When I hear politicians mention ‘socialism,’ I think of all of the negative things that have affected my country of origin and it turns me off to their message.”