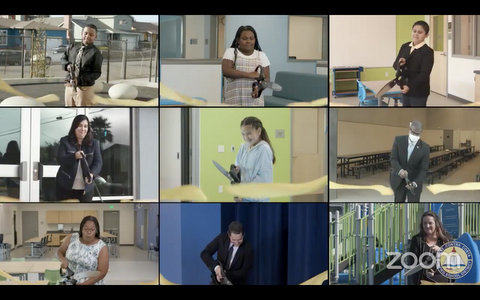 Posted at 14:58h in Education, News by Danielle Parenteau-Decker 0 Comments

The West Contra Costa Unified School District held a virtual grand opening Thursday for the Michelle Obama Elementary School, demonstrating the utility of the school’s newly finished, cutting-edge buildings and the ideals and history that went into it.

“Of course, we would’ve loved to have been there in person, but I feel like we really reached more people this way,” said principal Claudia Velez. “I can’t wait for the day we are in the building and we are able to utilize it and we can show you all around in person.”

The former Woodrow Wilson Elementary School has roughly 430 K-6 students; it was officially renamed in February by a unanimous vote of the school board. The board considered renaming the school after former U.S. first lady Michelle Obama following a request from the school’s Parent Teacher Association.

The new campus is located on 42nd Street and Roosevelt Avenue in Richmond. For the past two years, students attended a temporary location in El Cerrito while their school was being rebuilt.

Before the virtual grand opening kicked off, viewers were shown a montage of the school’s construction — including many aerial shots — while a marching band version of Pharrell Williams’ “Happy” played in the background.

The bulk of the virtual grand opening, held over Facebook Live, consisted of a video tour through different sections of the Michelle Obama campus. Student T’won Blake Jr. helped guide the viewer through the school and introduced them to a variety of speakers, including other students, teachers, parents, public officials and Superintendent Matthew Duffy.

The speakers provided context on the vision of the school and elaborated on what it represents. The video ended with all the speakers, who were split Zoom-style into separate squares on the screen, simultaneously cutting through yellow ribbons.

Velez, one of the first to speak, gave an overview of what the school site offers. She said Michelle Obama Elementary is the first “flexible learning school” in the district and Bay Area. The buildings, she said, are designed to keep students at the center of learning by giving them space to explore their unique interests and skills.

The school is built around shared learning suites where students can learn together, Velez said. Each suite includes a “project room,” she said, a relatively open area where learners can engage in “creative and imaginative hands-on activities and projects.” The size of these project rooms allow for customizable groupings of students within and across different grade levels.

Additionally, the indoor spaces are built to open up to outdoor spaces filled with plants and trees, Velez said.

Aaliya Cole, a fifth grade student, said in the video she’d been attending the school since she was in first grade. The old buildings, she said, were unsafe and falling apart, and there was no grass or trees.

“Seeing a beautiful garden each day will make me happy,” Cole said “I think this new school will help me learn in many ways.”

>>>Read: School Board Candidates Call for Equity and Transparency

Some of the officials also spoke during the reopening video. Gioa, who’s from Richmond and grew up attending local schools, said he was proud to see the school renamed after Obama, that it would be an inspiration to students and the community, and that “it’s the right thing to do at our moment in history.”

“It’s a great tribute to the former first lady of the United States who’s been such a great role model to those who advocate for equity and health and inclusion and justice and educational equality,” Gioia said.

PTA president Maisha Cole offered more background during the video on how the school was renamed. She said students participated in a real life civics lesson when plans for the rebuild were going forward in 2017. They attended late night board meetings and made signs, and worked closely with the district to make sure the rebuilt school fit the needs of the community.

Cole said they realized once the rebuild was underway that part of taking ownership in the new school was having the opportunity to name it. They wanted to choose a name that resonated with who they were as a community, she said, that resonated with their core values of “joy, agency, collaboration and community.”

Michelle Obama’s name rose quickly to the top of their list, Cole said. Cole said Obama is an inspiration for all and listed a few of the roles she’s known for — wife, mother, author, attorney and the first African American first lady.

“More importantly, she’s an example of perseverance and determination,” Cole said. “She realized at a young age the value of education and believing in one’s own ability. This is who we want our children to emulate. When the children step on to this campus, we want them to be filled with that spirit, we want them to feel the same sense of pride and joy.”