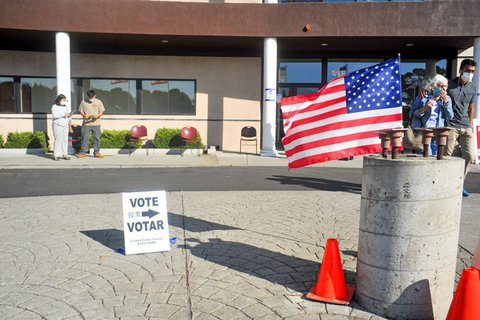 Before Election Day arrived, more than half of the 58,379 registered Richmond voters had cast their ballots, according to the Contra Costa County elections department. About 7,500 more people needed to vote on Election Day to match the 2016 turnout of 37,082.

Richmond voters make up a small segment of what could be the highest nationwide voter turnout in more than a century. Nearly 139 million people voted in the 2016 presidential election; this year, early voters alone account for almost three-fourths of that number.

Across Contra Costa, about 57% of registered voters — 400,008 out of 703,345 — submitted their votes before Election Day, according to the county election office, including 29,420 Richmond residents. Nationwide, more than 101 million Americans cast their ballots early, according to the United States Election Project, a nonpartisan website that tracks county level data.

According to the New York Times, vote tallies have already surpassed 2016 totals in six states: Colorado, Hawaii, Montana, Oregon, Texas and Washington. Eight other states reported more than 90% of their 2016 totals earlier Tuesday.