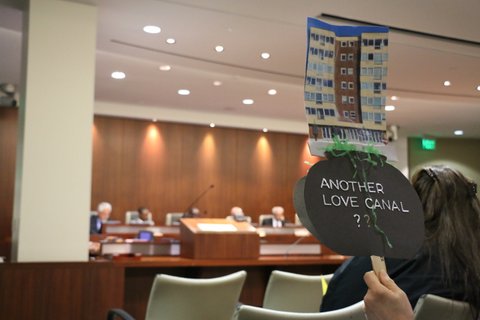 The Richmond City Council approved a cleanup plan for the Zeneca site at this September 2019 meeting. (Edward Booth)

A highly contentious development of several thousand residential units and more upon 89.6 acres of the historically polluted Zeneca site is scheduled to come before the Richmond City Council on Tuesday.

The site, also known as the Campus Bay site, is located between the Richmond Annex and Marina Bay area. The proposed development plan includes an already-approved remediation of the area, development of between 2,000- and 4,000 multifamily residential units, development of about 50,000 square feet for retail and business uses — including a 20,000 square foot grocery store — and 30.7 acres of parks and open space, according to the agenda documents.

In September 2019, the Council approved a cleanup plan to remove small portions of contaminated soil and cap the remaining toxins to create a protective seal. The California Department of Toxic Substances Control, which oversees remediation of the site, approved the plan about a month later. The plan is contentious among some community members because it doesn’t comprehensively remove all toxic substances.

According to the DTSC approval, a full cleanup would take about 10 years and require an estimated 64,370 truck trips to implement. The approved plan takes about two years to implement, with around 1,050 truck trips. The DTSC approval notes that the full excavation option would “create more harmful impacts to the community, including air pollution, dangerous traffic and increased dust.”

But some residents continue to push for the full excavation option, and the Richmond City Council voted to support it in July 2018. Then, two council members were replaced over the 2018 election cycle, and the council shifted its support in September 2019 to the capping alternative. This decision was made as part of a deal supporting development of the area by the developer, Shopoff Realty Investments, which promised to give $52 million to the city in a community benefits package. According to the agenda documents, the present total cash value of the package is at least $22 million.

The area was polluted in several ways from the 19th century up until the late 1990s. At one point, the Stauffer Chemical Company hauled loads of pyrite from the Iron Mountain mine near Redding — a federal superfund site since 1983 — and cooked it into sulfuric acid, burying the leftover cinders as landscape fill. In the 1950s, the company began manufacturing chemical fertilizers and pesticides. They allowed runoff to amass in “chemical ponds.” Stauffer occupied and polluted the site for nearly a century, and the site was closed by pharmaceutical giant Zeneca, which had by then acquired Stauffer, in 1997.

Incoming council members Claudia Jímenez and Gayle McLaughlin, both affiliated with the Richmond Progressive Alliance, are among those who vocally oppose the plan. They could sway the council to oppose it once they’re sworn in Jan. 12. McLaughlin told the Richmond Confidential that she thinks Mayor Tom Butt and others on the council pushed the development forward while the “lame duck” council that approved the cleanup plan last year still remains in power.

Butt, who supports the plan, wrote in an e-forum post Nov. 13 that the result of halting the cleanup would be that no cleanup occurs for quite some time. He wrote that, during this time, “the pollutants will continue to be subject to dispersal by wind and rain, and the groundwater will continue to be exposed to toxic chemicals.”

The Richmond Planning Commission voted unanimously Nov 19. to recommend the proposed development. Out of about 40 public commenters, most opposed the plan. Many also spoke during the Richmond City Council meeting Nov. 24 to express their discontent with the plan, and others said they weren’t given a chance to speak.

McLaughlin said at the planning commission meeting that it’s clear to her the city would be liable against health-oriented lawsuits if it allows residential development on the site without a full cleanup plan.

“This site, as it currently exists, poses a very dangerous situation for people and the environment,” McLaughlin said at the Nov. 19 planning commission meeting. “More than 100 chemicals of concern — heavy metals, pesticides and PCBs — remain after several incomplete remediations. And many of these are known to cause cancer, reproductive damage and other health problems.”