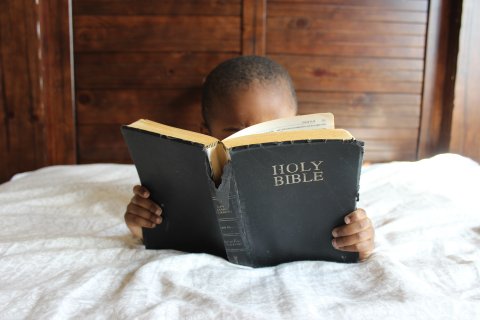 Posted at 08:00h in Commentary by Danielle Parenteau-Decker 0 Comments

The author (not pictured) was a devout Christian from a young age, but modern Christianity has him rethinking his beliefs. (Samantha Sophia via Unsplash)

I am a Christian. These days that is getting harder for me to say.

I was indoctrinated when I was young. I grew up going to the Salvation Army, and both of my parents were active in the church. They both preached. They laid hands on people. They spoke in tongues in evangelical churches all over the country. My father and my older brothers started one of the first Christian rap groups, if you can believe it.

We had Bible studies. I even lived in a church at one point. My favorite band is a Christian band called mewithoutYou. I have tattoos of Christian imagery and biblical scriptures all over my body. I didn’t curse until I was 18. I willingly went to church by myself for years as a young adult.

Last year, I had my daughter dedicated to the church, just as I was when I was a child. This holiday season reminds me of what my father used to say for as long as I can remember: The birth of Jesus is the reason for the season. My daughter is 4 years old, and by that age, I could recount the entire story of the birth of Jesus. But she can’t. She knows who Jesus is and can point out the baby in the manger, but that’s as much as she knows. Christmas, to her, is all about Santa and the presents.

My wife was raised spiritual but not religious, while I was raised very religious. But to be completely honest, I’m having trouble calling myself a Christian these days. Not because my beliefs have changed but because Christianity has changed for me.

I know Jesus to be a loving, compassionate socialist that was killed by the state. He fed the poor and healed the sick. He hung out with the outcasts. He was a rebel and an anti-capitalist who preached not to follow false idols. He loved everyone and truly preached equality and forgiveness. The Golden Rule is to love thy neighbor as thyself. I was taught the Bible, above all other things, was about love. So how is its modern interpretation so filled with hate? How can racist, sexist, anti-LGBTQ Trump-loving people and me, a liberal Black LGBTQ ally, all call ourselves Christians?

I don’t agree with almost all off what modern Christianity stands for or believes in, so can I still call myself a Christian? What do I tell my daughter about Christianity? Christianity has always been used in the wrong hands for evil. From the Crusades to the colonization of Indigenous people, people have done unspeakable thing in the name of Jesus.

So I ask myself, where is my place in all of this? Where do I stand? I know I don’t stand with the evangelical sect of Christianity that believes Trump won his reelection or that thinks God will keep them from getting COVID so they don’t need to wear masks. I think those people are completely delusional.

How can so many people fall for a man the Bible so clearly warns against? And why can’t they see they are being deceived? Trump is not a Christian. He’s an opportunist who used the conservative Christian party to gain favor to get elected. Gassing civilian protestors outside the White House for a photo op holding someone else’s Bible isn’t very Christ-like. That Christianity didn’t outright reject him has me really reconsidering my religion.

>>>Read: What Do You Believe In? Young people weigh in on issues of faith

The other day, I asked my daughter’s doctor what we should tell her about Santa being real or not and he asked us if we were religious. I pray every day and consider myself fairly religious. But at that moment I didn’t speak up. I didn’t want him to think I was a wacko. I’m embarrassed to be lumped in with modern Christianity. I don’t want people thinking I think like them.

Should I convert? I’ve always been interested in the teachings of the Buddha. You don’t see Buddhists saying the Buddha hates gays or that the Buddha got Trump elected. Reincarnation is a cool idea, though it sounds exhausting. I’m having enough trouble getting through the one life I am currently living. Doing this into eternity sounds tedious. I don’t think I’m ready for atheism ether. I have had so many experiences that let me know that there is something beyond here — something divine that binds everyone and everything.

So where does that leave me? Can you love Christ and not be a Christian? Can I have Jesus without the church? Can I pick and choose scripture that informs my life and beliefs like conservative Christians do?

At this point, I don’t have a choice. I’m just not ready to give up Jesus but Christianity can go.

That’s just where I am right now, and that’s OK. Santa will come on Christmas, and I will never forget the reason for the season. But my daughter won’t have to deal with the same indoctrination process I did. She will have the freedom to choose and to change and grow with her faith at her own pace.

And I think that’s OK too.