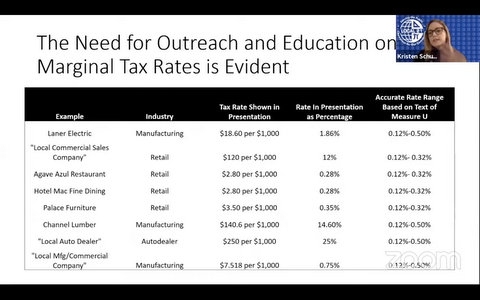 The Richmond City Council directed staff Tuesday to explore potential reductions to the city’s soon-to-be revised business license tax, which was shifted by voters to a gross receipts model in November.

Richmond voters passed Measure U in November overwhelmingly, with about 72.5% approving of the change. The measure, though it hasn’t come into effect yet, switches how business license taxes are calculated to be based on gross receipts — the total amount of income received by a business with no reductions — instead of the number of employees. As written, the measure establishes a ceiling, but no floor, for the business license tax rates. The City Council can vote to reduce the tax rates, but it can’t increase them beyond the rates established by the measure without the support of voters. The council can, however, increase the tax rates without voter support if it previously voted to decrease them, but those increases can’t surpass the rates put in place by Measure U.

The tax applies higher rates, separated into tiers, to businesses as they earn more. The rate of each tier only applies to earnings that fall within that tier, and doesn’t apply retroactively to earnings that fell into prior tiers. For example, a business in the “retail sales” category would pay a 0.12% rate for gross receipts under $1 million, and would pay a 0.16% rate for additional receipts earned in the $1 million to $2.5 million tier. But the original $1 million would stay taxed at 0.12%. Their final tax would be calculated by applying the separate rates to their earnings in each tier and adding up all the numbers.

Most businesses making under $250,000 in gross receipts are exempt from the percentage rates and instead pay a flat rate of $200. And the rates vary across industries. According to the city attorney’s financial analysis, the current rate structure is expected to raise about $6 million more for Richmond annually than the previous system. These proceeds can be used for any governmental purpose.

The council voted unanimously Tuesday for city staff to work with business groups and stakeholders to gather information on the tax rates, to create a committee to start examining the rates and to determine the factual accuracy of two conflicting presentations that kicked off the council item.

Mayor Tom Butt gave the first of the presentations, which was later alleged to be inaccurate by Kristen Schumacher, a research specialist at the International Federation of Professional and Technical Engineers Local 21, who also gave a presentation. Aaron Winer, board president of the West Contra Costa Council of Business and Industry, also spoke.

The bulk of Butt’s presentation made the case that the rates established by Measure U are too high and the council should lower them. Butt said that the council approved the item hastily in the first place, to get it to the ballot box in time, with the thought that the tax rates could and would easily be lowered if it was necessary.

“I think the consensus was, of the City Council, that we could always adjust the rates downward,” Butt said.

To bolster his point, Butt presented data on the rate increases for local businesses, some named and some not, the accuracy of which was later disputed by Schumacher. Butt used percentages to demonstrate the rate increases, and some increases were by several thousand percent.

Much of Schumacher’s presentation refuted points raised in Butt’s presentation. She said Butt’s claim that San Francisco’s tax rates are lower than those proposed by Measure U is inaccurate, adding that taxes at the highest tier — businesses making over $50 million in gross receipts — are much higher in San Francisco.

Schumacher said there seemed to be a lot of confusion over how the rates are applied and how business tax liabilities are calculated with Measure U. She said many of the examples of tax rates for businesses in Butt’s presentation are inaccurate.

“I don’t know where those tax rates came from,” Schumacher said. “This is why I think we need more outreach and education so we can correctly assess what the impact is actually going to be. Right now, some of the fears may not be based on what the reality is in the measure as currently designed.”

Winer said the business community doesn’t intend to roll back Measure U, that it acknowledges that the city needs to raise revenues and that business license taxes haven’t been raised in years. But, he said, many businesses can’t afford the raise in taxes established by Measure U, and several — including at least four businesses that earn among the most in gross receipts in Richmond — could end up leaving the city if the rates go unchanged.

Council member Jael Myrick said he didn’t want to vote on anything that the incoming council members will want to overturn when they take their seats in January. But, he said, he thinks everyone’s in agreement that they don’t want to cause an exodus of businesses from Richmond. He said the council should look to build consensus, and talked about some examples of changes the council could agree on: that businesses making under $250,000 in gross receipts should only pay $100, that some tiers or different brackets in the system might need to be added, and that, perhaps, hotels could be exempt.

Myrick said the sooner the council can create calm around the policy, the less they will have to worry about businesses leaving the city based on information that might not even be true.

“I think there’s some very simple things that we can have consensus on that we could do now and, let me just say this part, give certainty to businesses,” Myrick said. “The reason we’re trying to get this done is because businesses have that scare shock — they’re having that sticker shock right now and making decisions on what they’re going to do in the context of COVID.”