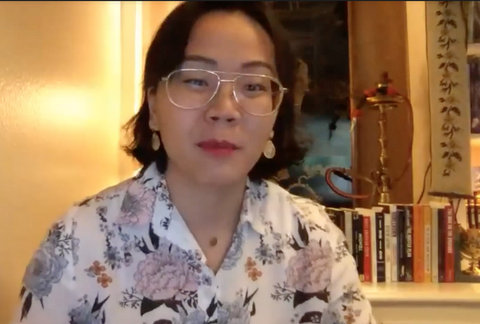 Posted at 14:09h in National by Danielle Parenteau-Decker 0 Comments

Meili Criezis, who analyzes extremism, spoke during a media teleconference Jan. 22 about the use of “misinformation and disinformation to fool people.” (Screenshot captured by Joel Umanzor Jr. / Richmond Pulse)

QAnon beliefs won’t simply dissipate among its international followers now that the Trump administration has left the White House and could become a global religion.

That was the conclusion of a three-person panel of national experts on extremism regarding the influence conspiracy theories had on the insurrection Jan. 6 in Washington D.C. The forum, held by Ethnic Media Services over Zoom on Jan. 22, aimed to educate and explain the ever-evolving nature of how the far right has used QAnon internet conspiracies, racist rhetoric and zealous Christianity to fuel its movement.

One of the experts was Meili Criezis, a program associate for the Center of University Excellence at American University who specializes in analyzing and researching domestic and international extremism. She said the influence of QAnon predates the 2016 presidential election.

“The first thing that would be great to cover is how QAnon originally came into being,” Criezis said in her presentation. “QAnon, interestingly, is rooted in an earlier conspiracy … called ‘Pizzagate,’ which stemmed from a conspiracy on 4chan in 2016. It included the ‘Pizzagate’ conspiracy with the core belief that Kabbala elites were abusing children and that these conspirators were located around the country in various restaurants, including the famous ‘Pizzagate’ restaurant.”

The disinformation around this “Pizzagate” conspiracy made its way through various threads across the internet and eventually resulted in 29-year-old Edgar Madison Welch of North Carolina driving to Washington, D.C., and firing a gun inside the Comet Ping Pong pizzeria in December 2016.

In 2017, Criezis said, a 4chan user named “Q,” who claimed to have “Q-level” security clearance, began posting inside information about a “plan” by then-President Donald Trump to stage a countercoup against the fictitious “Deep State,” a conspiracy that there is a direct collusion by some Kabbala, pedophile elites to hide a government within the elected government. Users who followed the advice of “Q” were told in various posts that a “day of reckoning” would come and that members of the “Deep State” would be outed and executed.

“This day of reckoning is referred frequently to as ‘The Storm,’ ” Criezis said. “So phrases like ‘The storm is coming,’ or even when President Donald Trump had said ‘the calm before the storm’ — a lot of individuals who had become interested in QAnon and had started making their way down the rabbit hole, they picked this up as signaling from the president that he is working in tandem with ‘Q’ and that he is on their side.”

Because of the relationship between QAnon believers and Republican voters, Criezis contends that the GOP will have to address the fallacies of these conspiracies and focus on verifiable information.

“I think they must have a united force in saying … ‘We have our differences with the Democrats,’ for example, but this isn’t a political issue, this is an issue about using misinformation and disinformation to fool people and to bring them into a very conspiratorial network and possibly also dangerous space where violent individuals have in fact carried out violent actions that are part of the QAnon community,” Criezis said.

>>>Read: Lie of the Year: The Downplay and Denial of the Coronavirus

There is a distinguishable racial rhetoric involved in these movements, which was on display at the Jan. 6 insurrection at the Capitol, according to Colin Clarke, senior research fellow at the Soufan Center, who specializes in terrorism, insurgency and criminal networks.

“They are more unified with what they are against than what they are for,” Clarke said. “There is a very heavy dose of anti-Semitism that kind of serves as the connective tissue, as it were, between many of these groups.”

Clarke said that one of goals by the new administration is to hone in on these fringe groups.

“This is at the top of the list,” Clarke said. “Right before this call, I noticed that there was an announcement by the Biden administration about how they plan to tackle this threat. There has been tasking sent down to ODNI [the Office of the Director of National Intelligence] that is going to request a comprehensive threat assessment with the FBI and the Department of Homeland Security.”

The use of the internet and racist rhetoric isn’t the only manner in which these groups spread information and add to their ranks. According to Ricardo Moreno, a theologian who specializes in Latin American churches, this type of extremism has infiltrated various branches of the evangelical movement, especially those that serve the Latino population.

“For many of these evangelicals, Donald Trump — according to a lot of the prophecies they received in churches — was anointed by God,” Moreno said. “This is really important to understand: This is a theological concept. For a lot of conservative Latino evangelicals, they didn’t see Trump as only a political leader, a candidate or a president; he was chosen by God in the prophecies to do something.”

Moreno said that the best way to combat this misinformation is for the media to better cover religion and get sources such as theologians, doctors of religion, for insight and those who have been affected by religious extremism to amplify their voices.

Moreno said he fears that the misinformation spread by QAnon through the church will be the birth of a new transnational religion.

“I’m worried about that,” Moreno said. “Because it is not only in the U.S., but it’s spreading to the whole world.”