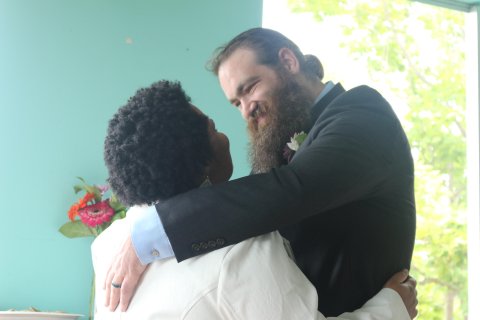 14 Feb What the Pandemic Means for Love and Marriage

Posted at 07:00h in COVID-19, People by Danielle Parenteau-Decker 0 Comments

As with a lot of couples, the pandemic has had an effect on Keisa Reynolds and husband Larry’s relationship, but, she writes, they will “keep choosing to love each other each day.” (Photo courtesy of Keisa Reynolds)

My husband leaves used tissues on shared countertops if he feels that they haven’t been sufficiently used. Not only is the action gross, it doesn’t stop him from grabbing another tissue when he feels a sneeze attack coming on. It doesn’t get discarded, just added to the pile for later until I get fed up and toss them out. The other day, I found myself wondering if this is something he has always done. Is this a new habit? Has he done this every time he has gotten sick in the four years we’ve been together? How have I not noticed?

It could be that I only notice now because I rarely leave the apartment. This would be grounds for a divorce for some people living with their spouses during the pandemic. I am a reasonable person, so I won’t hand him divorce papers. Instead, I add it to the mental checklist of things that annoy me. This habit of his reminds me of all the idiosyncrasies that we have learned about each other since March 13, 2020. We haven’t necessarily learned to love them, but our marriage has gotten stronger with the realization that we are equally as annoying as the other person.

Lately, it does seem like every other couple is breaking up or getting divorced. With every baby or engagement announcement, there are at least two announcements about a separation. I congratulate anyone who makes the best decision for themselves, and part of me wonders how much the pandemic has contributed to these decisions.

The pandemic has highlighted many issues in relationships, especially for significant others who are co-parenting. The circumstances brought on by the pandemic has prompted many people to reevaluate their relationships in ways they hadn’t previously had to consider. There are concerns about who takes the lead on parenting, disagreements about abiding by COVID-19 precautions, and difficulty accepting that the future looks quite different than before. Many couples and individuals find themselves asking, “Are we actually happy?” at some point; due to the pandemic, some are asking sooner than they expected.

Although it may seem that everyone we know is breaking up, recent data has found that divorce rates were lower than researchers initially anticipated. In fact, some couples discovered a newfound appreciation for their relationships. This doesn’t nearly mean that every married couple is happy. Some people might have separated but haven’t done it formally to maintain health insurance, provide financial support, or simply because it’s not a priority as long as they are on the same page.

Fortunately, my husband and I are still committed to our marriage. We celebrated our first wedding anniversary on April 22, 2020, which we did not predict would be during a pandemic.

In our first year, we welcomed our first child, supported each other through new job and educational opportunities, and survived a major health scare, all prior to the pandemic. We did not expect to turn around and have to spend six months sharing our two-bedroom apartment with our then-infant child all day, every day. Like everyone else, our routines were dramatically disrupted by the threat of COVID-19 and suddenly we had all the time in the world to critique the way the other person loaded the dishwasher, fed the baby or, God forbid, sneezed loudly during important Zoom calls.

We have had dozens of moments of being frustrated with each other, but nine out of ten times, the root cause was the pandemic. We like each other. I mean, we genuinely love to spend time with each other, make the other person laugh and be part of the reason why they reflect on how much they love life.

Since our anniversary, we drove from Chicago to Sacramento in 72 hours, with our now-toddler, and signed a lease on a new apartment in a city where we never saw ourselves living. We celebrated more career advancements and the completion of certificate programs. We also mourned the deaths of family members and set boundaries with various loved ones who wanted to spend time together in person despite the pandemic. We have had to change our plans for the future and make a commitment to continue to compromise.

I won’t make light of the pandemic by saying it made our marriage stronger, but I will say that the circumstances it created helped solidify our individual decisions to keep choosing to love each other each day. It is likely that our second anniversary will happen during the pandemic as well. We know it is not how we celebrate that matters; we are just grateful we made it another year. We are grateful to still have each other.

And yes, I will continue to remind him how to use a trash can.