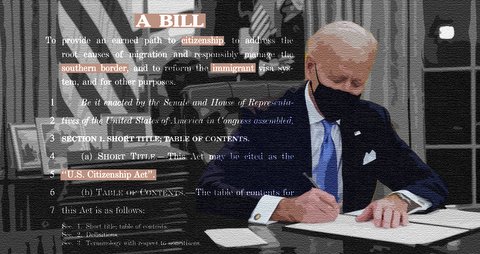 Posted at 10:39h in Immigration by Danielle Parenteau-Decker 0 Comments

Immigration advocates and lawyers hope the Biden administration’s aggressive start in reversing Trump-era immigration policy in its first month will carry on through till the end of his term.

“The last four years have felt like nothing less than a war against immigrant families,” said Marielena Hincapie, executive director of the National Immigration Law Center, at an online press conference Jan. 29. “Today, we are so hopeful. We really believe this is the start of a new era in our country.”

Hincapie has worked as a top immigration advisor for the Biden campaign, and now for the Biden administration. Part of her hope comes from President Biden’s legislation on immigration. The U.S. Citizenship Act of 2021, which would offer 11 million undocumented people a path to citizenship was sent to Congress on the first day of his presidency.

On Feb. 18, the act was formally introduced to the Senate and House by Democrats Sen. Bob Menendez of New Jersey and Rep. Linda Sanchez of California, respectively.

The U.S. Citizenship Act proposes an eight-year pathway to citizenship for undocumented people. The bill also includes policy to shorten the process to legal status for agriculture workers and Deferred Action for Childhood Arrival recipients, increase the number of visas and green cards given out and invest in technology to patrol the U.S.-Mexico border.

The bill would also change the word use of “alien” to “non-citizen” when referring to undocumented people in law.

“I think that the tectonic plates underlying the debate have shifted,” Frank Sherry, founder and executive director of America’s Voice, said at the online press conference.

Because the Trump administration “weaponized” the already failing immigration system, the policies that were enacted the last four years were cruel. But because the attack against immigrants has been so outrageous, public support for immigrants has grown. And now, Biden successfully reversed policy and took steps in the right direction, Sherry said.

In his first week in office, Biden overhauled immigration reform through various executive orders, ending the “Muslim and African ban”; reinstating the DACA program, allowing for new applications; halting border wall construction; and placing a 100-day moratorium on most deportations.

Biden has also begun to shut down the controversial Remain in Mexico program in which non-Mexican asylum seekers in the United States are sent to Mexican cities to await their hearings. Biden has also extended the Deferred Enforcement Departure for Liberian beneficiaries. Another policy change reversed Trump’s policy to exclude undocumented immigrants from the census count.

“Since 1965, the immigration system has centered around families with the understanding that families help immigrants settle,” Yang said.

The better an immigrant family is situated into their new home, the easier it is for them to become part of society by finding employment, becoming business owners and going to school, he said.

The problem with the immigration policies of today is that there is racism against immigrants by lawmakers, although most people in the U.S, are pro-immigrant, he said.

“Fear of browning in America exists but it is a small segment. Unless you are a Native American or an African American descendant of a slave, we are all immigrants,” Yang said.