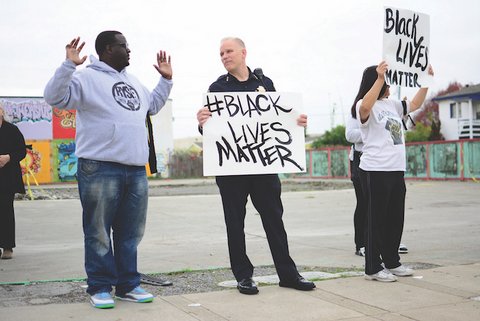 Chris Magnus participated in a Black Lives Matter protest in 2014 in uniform while he was chief of police.

This story was originally published April 12, 2021, by our partner Richmond Confidential.

The former Richmond police chief credited with drastically reducing the city’s murder rate is in line to lead U.S. Customs and Border Protection.

President Joe Biden on Monday said he will nominate Chris Magnus as the agency’s commissioner. Magnus led Richmond’s department from 2006 to 2015, when he took his current job as police chief in Tucson, Arizona.

>>>Read: Exiting Police Chief Looks Back at 10 Years in Richmond

Pointing to Magnus’ time in Richmond, the White House said, “Magnus played a key role in rebuilding community trust in law enforcement and dramatically reducing the number of shootings and homicides.”

Magnus rose through the ranks of his hometown police department in Lansing, Michigan, before becoming chief in Fargo, North Dakota, a job he held for seven years until he was hired by Richmond. White and gay, he was seen as an unconventional choice in a city whose population is mostly Black and Latino.

Magnus bought a house in Richmond, which made him unlike a number of his predecessors. And went to work changing the reputation of a city that was among the 10 most crime-ridden in the United States, the so-called murder capital of the Bay Area. He shook up the department, promoting a lawsuit by some of this own officers. And he stirred controversy again when he held up a Black Lives Matter sign at a rally, a move he later said he did not regret, despite the backlash.

>>>Read: Police Chief Magnus: Why I Joined a Protest Against Police Brutality

Latino and women officers were promoted under Magnus, some leap-frogging over higher ranking officers. Seven Black senior officers filed a lawsuit over that in 2012, accusing Magnus of racial bias for denying them promotions. The case did not hold up in court.

Earning the label reformer, Magnus’s approach to policing came from a belief that the department should collaborate with community organizations, including health and social services agencies and academic institutions, to build a safer city.

One of the ways he implemented that strategy was by making the department more transparent. He published officers’ phone numbers and email addresses on the department’s website as well as their work shifts, to make it easier for residents to contact the right beat officer. Those officers were expected to reach out to residents without being called, and they were evaluated largely on how they engaged with people and addressed their concerns.

Richmond’s murder rate dropped to near historic lows under Magnus, with 38 homicides the year he was hired and only 11 the year before he left. The numbers, however, were rising in 2015, before Magnus moved to Tucson, with a brazen drive-by shooting that wounded a child and gunplay that interrupted a high school football game.

At the end of his tenure, Magnus credited his officers with making the city safer and restoring the community’s trust.

“I think we’re following the right playbook,” he told Richmond Confidential then. “But I’m never going to say ‘mission accomplished’ because there’s always going to be work that needs to be done, no matter what.”