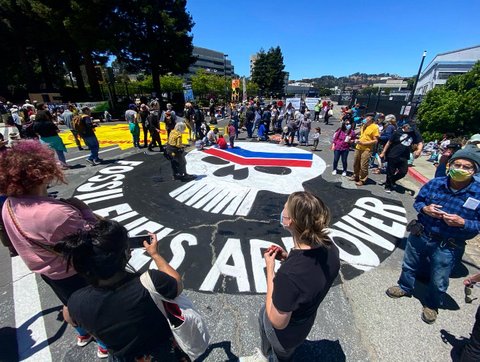 Posted at 11:20h in Environment by Danielle Parenteau-Decker 0 Comments

Protesters made street art outside the Richmond refinery as part of the eighth annual Anti-Chevron Day. (Denis Perez-Bravo / Richmond Pulse)

By Maria Bernal and Denis Perez-Bravo

Hundreds of people showed up at the gates of the Richmond Chevron Refinery on May 21 to paint street art and protest the refinery’s presence.

“I want to acknowledge the Ohlone people of this land,” said Isabella Zizi, referring to the Indigenous people who first inhabited what is now Richmond. “We’ve dealt with [Chevron] for over 100 years, and more people are rising up and more people are taking this action. They’re saying ‘We’re tired of it.’ ”

Zizi and many others started gathering at the Castro Street entrance around 11 a.m. As she and other protesters began painting the street, a Chevron Fire Department truck parked next to the main gate on the refinery’s side took out a fire hose attached to the vehicle and wet the floor as a warning. 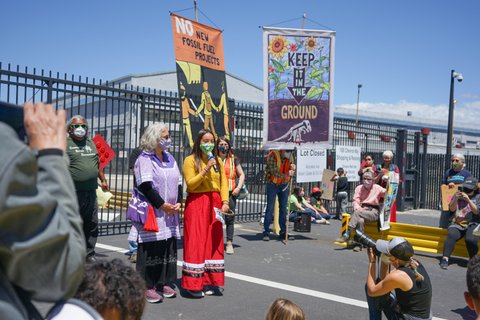 “We need … a world that doesn’t pollute us,” Isabella Zizi said during her speech at the 2021 Anti-Chevron Day protest. (Denis Perez-Bravo / Richmond Pulse)

Protesters, sensing the threat to their goal of painting the street, sat in front of the gate to block the truck from getting closer.

Zizi, a Richmond native, was one of the many protesters who sat in front of the gate.

“There’s no reason to silence us. We’re here peacefully. We understand that [Chevron workers] have a job…but we also understand that this is not the way for a more sustainable life,” she said.

Zizi doesn’t see herself as a protester, but rather as a protector of the land, a mission she started in high school because she knew that, as a young person, she needed to stand up for her future.

The struggle in Richmond against Chevron’s oil projects is intergenerational and was shown as such at the event as many children were present.

>>>Read: “Chevron Is On Fire” Again. Change Is Long Overdue.

Among the children were a group of elementary schoolers from Forrest Freedom School who drove from Oakland to participate in the anti-Chevron rally. The children helped paint the street art and chanted and sang songs to the crowd.

“They frack the earth and pollute the sea. Chevron, Chevron let us be,” the kids sang.

The youngest child in the group was 2 years old and the oldest was 11. The teacher who brought the children asked the children’s identities to remain anonymous but hoped their voices could be heard.

The 11-year-old shared her thoughts about Chevron’s long-lasting effects.

“There has to be some world for us to live in when we’re older,” she said. “Chevron believes that they can poison the Earth and get away with it but just not gonna happen. That’s just not OK.”

As a child aware of the effects of fracking and oil spills, she hopes alternative energy sources will become a mainstream initiative big companies must adhere to.

“They don’t care about our future. They just care about their money,” the young girl said.

She said that if nothing is done to stop the growing problem of pollution, more animals will go extinct and the environmental effects will be irreversible.

The group that rallied finished two large street art pieces close to 12:30 p.m. One was a painting of the sun with words of encouragement around it and inside. The other was a skull with the red and blue Chevron logo on its forehead. 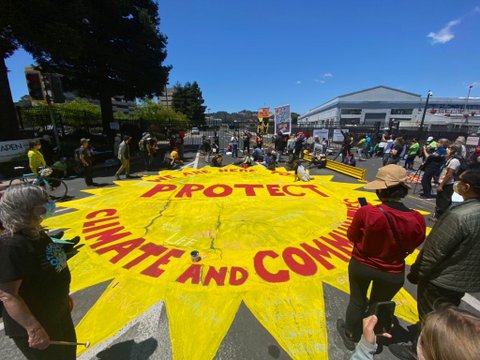 One of the two large art pieces made for this year’s Anti-Chevron Day protest. (Denis Perez-Bravo / Richmond Pulse)

The art pieces were washed away by Chevron workers hours after the event, but for attendees, the renewal of the fighting spirit within the movement will be everlasting, climate activist Andres Soto said.

“To me, it’s very fulfilling, very rewarding to see the young people,” Soto said. “But even more important for the movement, it’s that the new generation is being brought up to think critically.”

Soto was introduced to the climate change movement when he was 18 years old as he got involved with the United Farm Workers. Just as his views were changed in college, he says he sees an environmentally conscious shift in Richmond’s culture and its politics.

More and more people are becoming aware of the damage the particulate matter Chevron releases to the Bay Area and then the community breathes in.

“Particulate matter is so small it penetrates into our blood and into our immune system. And this happens everyday and every year. That is what we are fighting for locally,” he said. “We’re gonna stand up, and we’re gonna fight back. And sometimes we even win.”